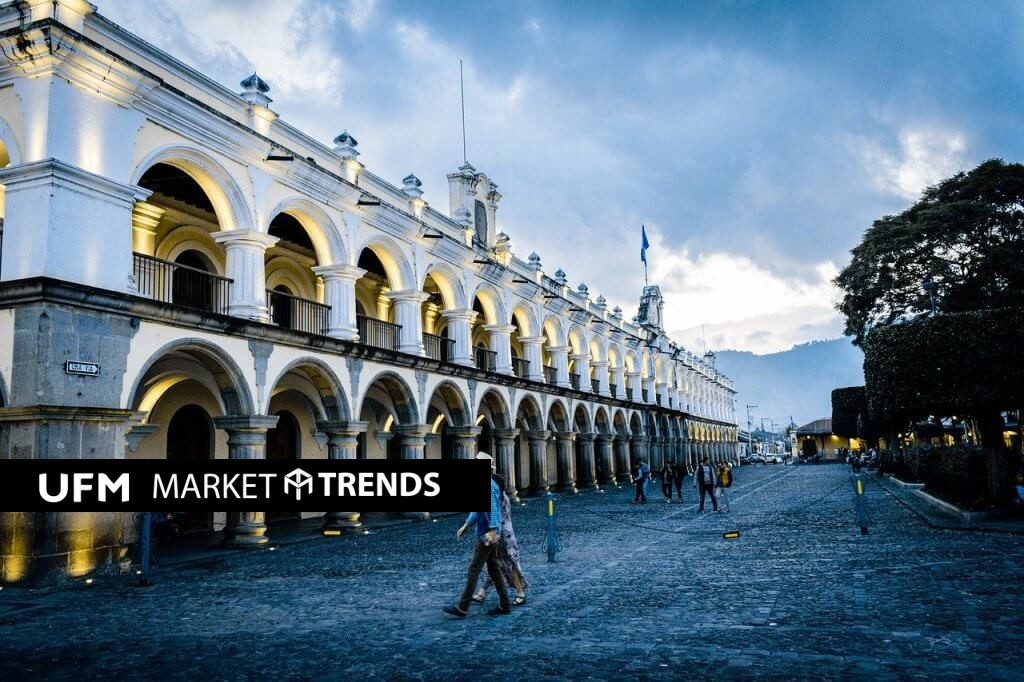 In our latest report on the Guatemalan economy at UFM Market Trends, titled “Guatemala’s Growth Shines Amidst a Central America with Economic Problems“, we draw attention to the regional context within which the main macroeconomic indicators unfold. It “shines“, yes, but relative to a mediocre context: Panama and Costa Rica, the richest countries in the region, saw their annual growth rates reduced by 0.8% and 1.1% this year, an unfortunate trend, considering that both countries were already growing well below their potential. Nicaragua, the country that suffers the most in the region, officially entered into a recession in the third quarter of 2018, and as we observe the latest updates to the indicators of economic activity, we appreciate that the contraction intensifies rapidly (year-on-year change of IMAE[1] in February: -7.5%; annual GDP, IMF estimate: -5.04%). Guatemala, on the other hand, has been growing virtually at the rate of its average since 2002, which is also the highest rate in Central America in 2019, with a noticeable growing trend (it is precise to point out, however, that a historical average of 3.5% is, indeed, very low for a country that is as poor as Guatemala). 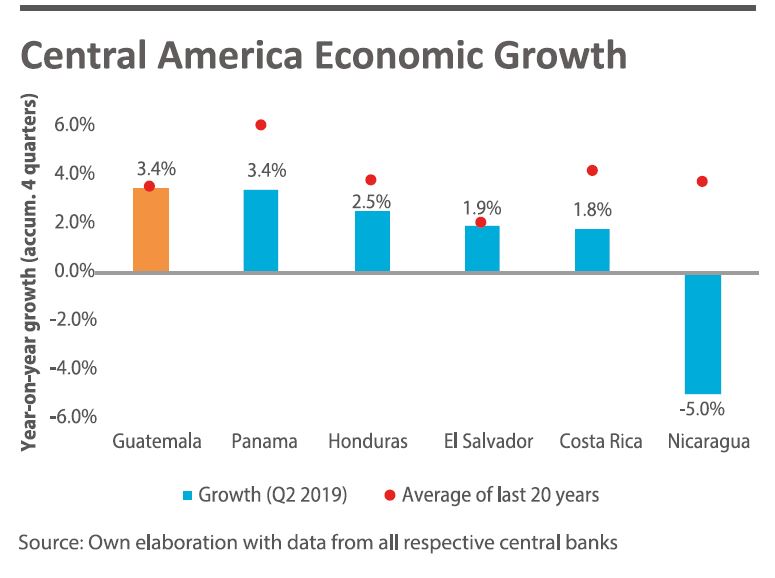 Macroeconomic indicators are frequently volatile. Nor do they imply development, but, in general, we can assert that without economic growth, no development can follow (it is no coincidence that the two countries with the highest historical averages are also the richest and most developed, despite going through difficult times). Then, it is compelling to break down the engines of the Guatemalan growth and determine whether these are sustainable towards the future, dangerous, or a mere coincidence soon to change in the short term.

Remittances: an increasing percentage of GDP

It seems to be that Guatemala’s main “export” is the human resource. And quite literally: remittances account for almost 13% of Guatemala’s GDP in 2019. Today, remittances exceed $10,000 million a year, and at the current rate, it is very likely that the amount of remittances will exceed exports in 2020. 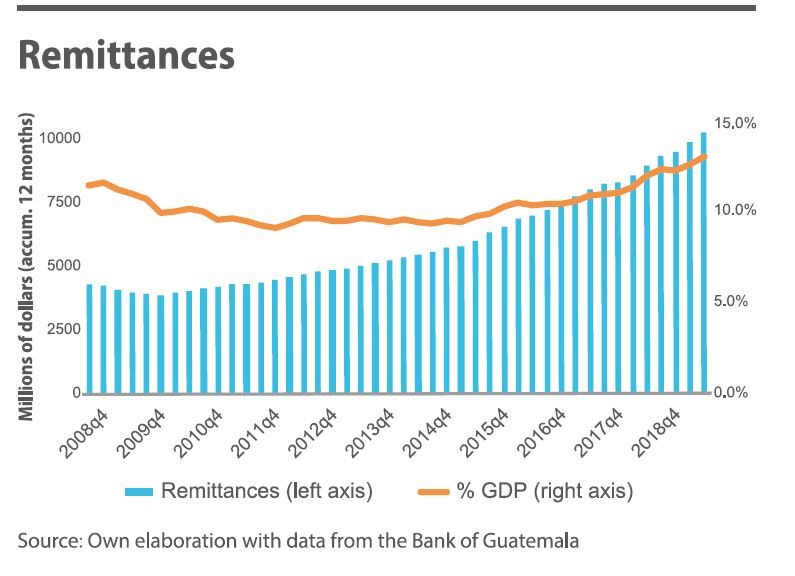 As we show in our latest report, remittances are the main factor that explains the trend of the vast generation of dollars in the country, and therefore a positive current account (let us remember that the secondary income account, of transfer payments, is one of its leading sub-divisions). With the balance of payments in hand, nowadays, Guatemala is able to generate more dollars than it can or wants to spend. This correlates with a lower need for foreign financing (less negative financial account), and used to do so, too, with an appreciation of the quetzal that stopped since August 2017, when the Banguat started a massive purchase of the bulky dollars in the exchange market (that is, it retains them and takes them out of circulation), just right after the enormous pressures of the export lobby. 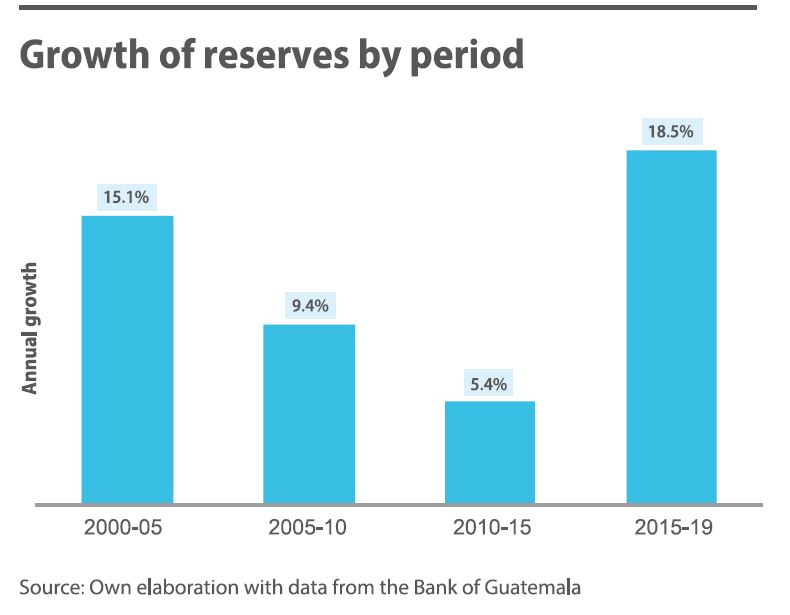 Fastest growing sectors: Are they all “sustainable”? 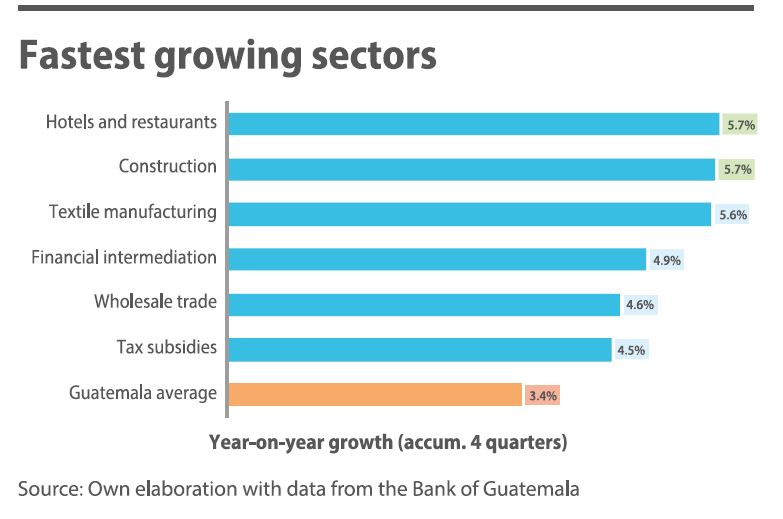 But the construction sector stands out, compared to the others, seeing its growth in terms of economic activity correlated very well with its position in the extension of credit. 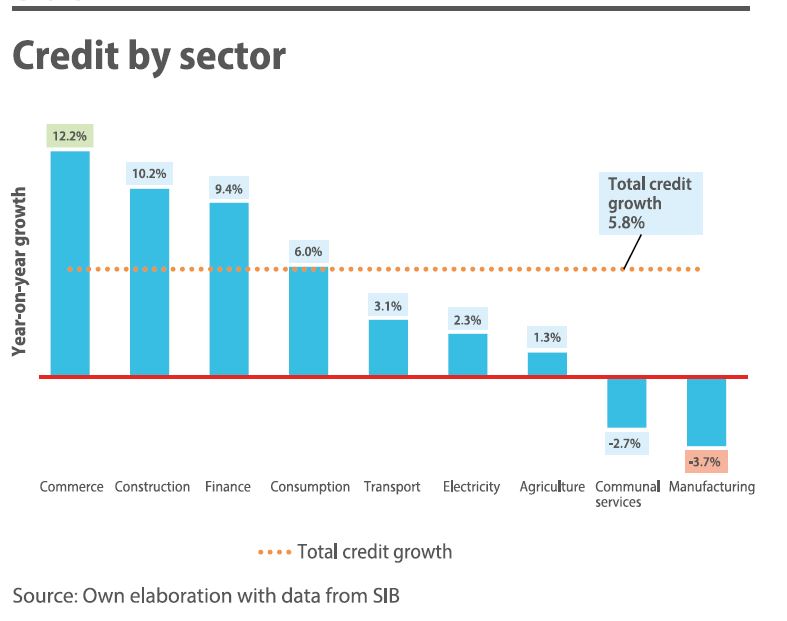 It seems that the increase in economic activity of the construction sector in 2019 is largely due to the credit extended by the banking sector. It is not far-fetched at all, considering the inherent long-term nature of such economic activity. But, in the midst of the debate about the possibility of a housing bubble in Guatemala City, the sustainability of the rebound in construction draws much attention. Are many of the real estate projects in Guatemala City good investments at the current sales prices? Can the credit be returned without problems? Time will tell.

The future, the long-term: what matters the most in the economy and the creation of wealth

At UFM Market Trends, we have repeatedly pointed out what we believe is one of the greatest shortcomings in the Guatemalan economy: the lack of investment in productive factors. Whether foreign or endogenous, the theoretical framework is the same, without present investment there may be little future production, and therefore, little hope of improving the situation of poverty in the future. A series of indicators can give us light regarding Guatemala’s ability to increase its production considerably in the near future.

Precisely, the gross fixed capital formation is one of the best indicators to inform us about the future growth potential of the economy. For Guatemala, this indicator has been stagnated at a growth rate of between 14% and 15% since the end of 2009. Such a rate for such an indicator, as we emphasized in the special report about investment in Guatemala last year, is one of the lowest in the world. In fact, Guatemala is ranked 162 out of 182 countries in percentage of GDP dedicated to gross fixed capital formation, and during the last 70 years it has never been higher than the world average. 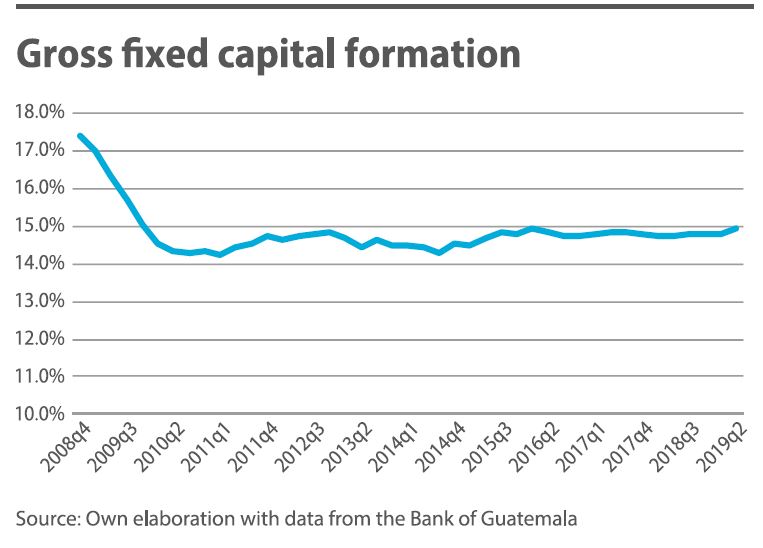 The new foreign direct investment: it was already unusually bad, has just collapsed to historical lows in 2019 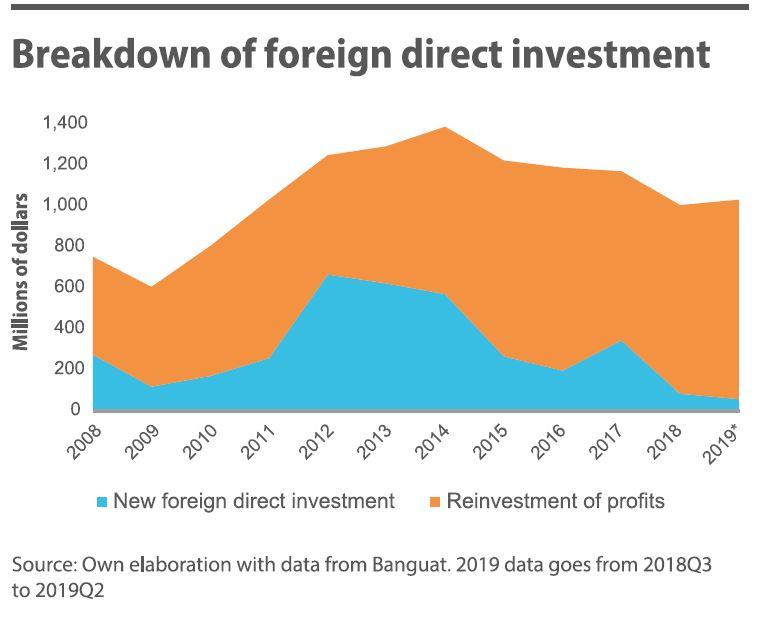 Guatemala has virtually no new foreign direct investment. The little that accounts as foreign investment is merely reinvestment of profits. Beyond other problems and even ideologies, it is practically a fact that until Guatemala does not facilitate new investment, and guarantees their security in terms of legal certainty, this essential indicator will not have good prospects for improvement; and it will be very difficult, therefore, for Guatemala to escape poverty in the coming decades.

The region is not going through its best moment, and the United States, an essential trading partner, increases its risk of recession. Even so, Guatemala does not seem to want to follow the US in the downward trend of economic growth, at least not for now. But one thing is to shine or stand out with respect to what is not going very well, and another very different is to go on a good path. Guatemala, especially in terms of the indicators that reflect its potential to substantially increase its future production, is lacking much. Hopefully, the new administration embraces that, although economic growth does not imply (immediate) development, without economic growth there can be no development at all (in the long term).

This article is a brief excerpt of our latest report on Guatemala.

José is a Computer Science major at Minerva Schools at Keck Graduate Institute (San Francisco, CA) with a concentration in Data Science. Previously, he has been awarded the first place at the Facebook 2019 Data Challenge (Menlo Park, CA), and taken part of UElCato from the Cato Institute and Francisco Marroquín University (Guatemala City). He is also seeking a minor in Government, Politics, and Society at Minerva.