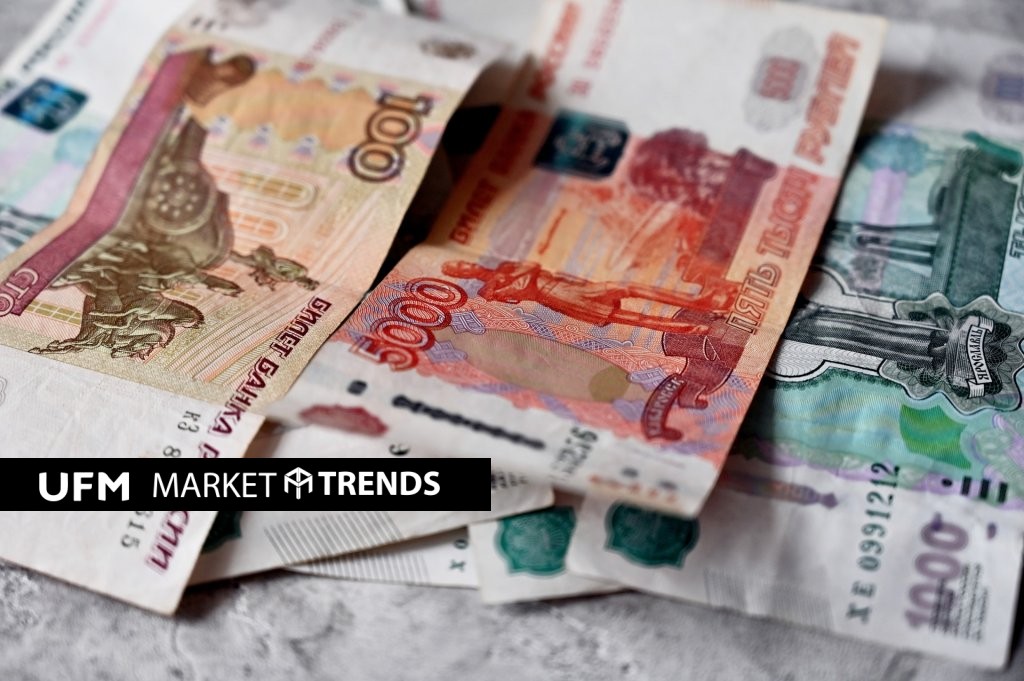 After imposing several superficial sanctions on Russia, Western countries have decided to impose some form of entity-list sanction—in other words, sanctions that can really damage Russia economically. It looked like Russia was going to get its way, and that is what the markets at least appeared to be discounting when, after plummeting in the wake of the invasion into Ukraine, they closed Friday with significant gains. It does not seem that this is the situation anymore, and a Black Monday is more than probable.

This article focuses on the sanction that freezes the Russian central bank’s foreign reserves. It also touches briefly on the expulsion of some Russian banks from the SWIFT system.

What Are International Monetary Reserves?

Monetary reserves are assets kept by central banks that act as backing for national currencies. Why would a currency need backing? Does it not have value in and of itself, based on the consumer goods it allows us to access (or more generally, what we can buy with it)?

There is some controversy about the specific nature of currencies in the current financial system. Some economists argue that currencies are assets in and of themselves (in line with the supposed value they would have for accessing goods), while others argue that today’s currencies are actually a form of central bank liability (a very restricted form of liability, to be sure).

Without wishing to engage in the debate, suffice it to say that there are times when national currencies, for some reason, are oversold on the market. Something provokes a panic, which could be justified or not, and many people try to get rid of a currency at the same time, either by selling it for another currency in a financial market or by using it to buy goods in a real market. Times when a currency tends to be oversold include some kinds of financial crises and the beginning of a war.

The Central Bank Defends Its Currency with International Reserves

The star assets maintained by the world’s central banks as a monetary reserve are the US dollar and dollar-denominated assets that are considered very safe, which are almost always short-term federal debt from the US or another country such as Germany. During a crisis of confidence, such as a financial crisis or a war, people seek liquidity and security. Accordingly, central banks should have assets that are more liquid and that are considered safe (I do not think public debt is a safe investment, but other financial analysts differ). Although the dollar is considered a safe haven in times of uncertainty, it is by no means the only safe haven. Precious metals, especially gold, are the star reserve monetary asset, historically speaking, and still play an important role today. Some countries may keep currencies such as the euro, pound, or even the yuan or the yen in their international reserves (although none of these currencies are used on a large scale as a reserve monetary asset).

Thus a country’s monetary reserves serve to sustain the value of a currency when there is a crisis of confidence in it and when there is a flight and overselling that could lead to an inflationary spiral.

Let us now analyze Russia’s international monetary reserves. What assets has Russia accumulated in recent years, and in what quantities? We will also examine where it has accumulated these assets, as this is a key point right now.

First, the quantity: Russia currently has just over $630 billion in international reserves. 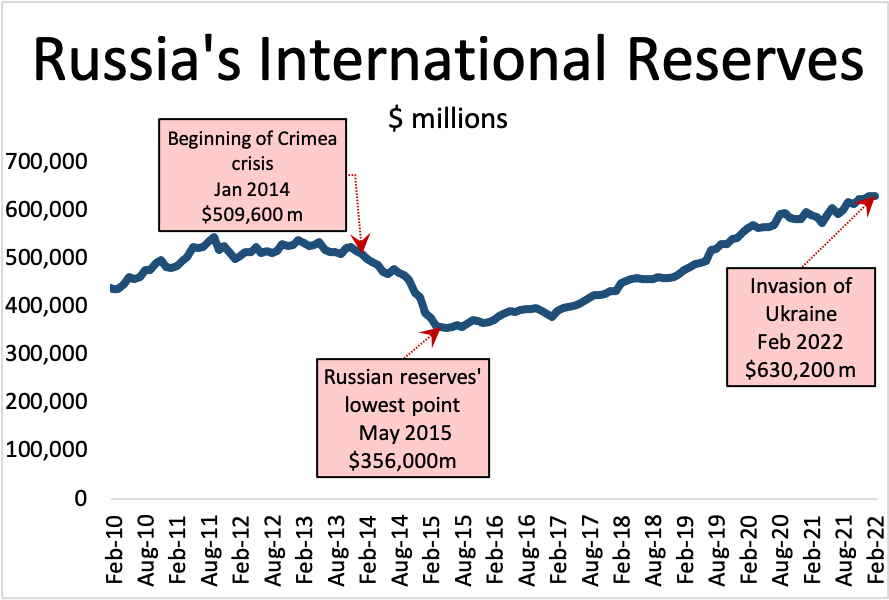 The amount of reserves has been shifting in recent years. Before 2014 the amount barely moved. With the beginning of the invasion of Crimea in 2014, the Russian central bank began to burn through its monetary reserves. In just a year and a half, reserves fell from more than $500 billion to a little over $350 billion, a drop of more than 30 percent.

Reserves fell for two reasons, and both are related to the currency defense discussed earlier. First, wars provoke panic and a massive sale of currency, so the Russian central bank had to protect the currency. Second, the price of raw materials, especially energy raw materials, plummeted in the second half of 2014. And Russia is a big exporter of energy-related raw materials, mainly gas and oil. In other words, the national currency was oversold because of fear of war while imports of dollars fell because of the drop in the price of raw materials. Both caused a collapse in the price of the ruble. The huge drop in the ruble occurred even though, as mentioned, Russia used no less than 30 percent of its reserves to back the value of the ruble. It seems that the Russian reserves were enough to maintain the ruble’s value for some time, at least until mid-2014 (this is what the sanctions that have just been imposed are very likely to prevent). The following graph does not include February, as it will be analyzed in more detail further on. 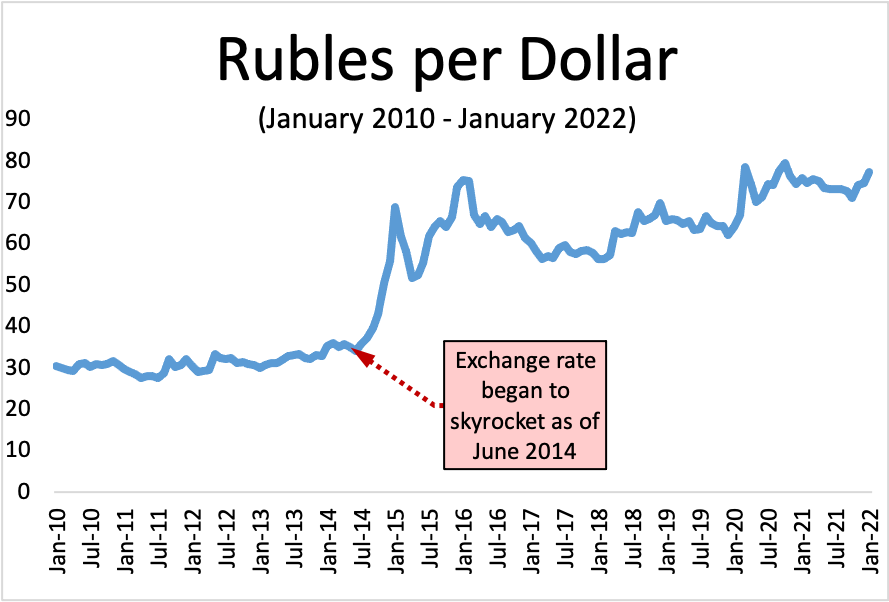 Thus far, we have only analyzed the total amount of reserves Russia has accumulated; we do not yet know in what instruments it keeps this currency. Below is the breakdown of assets held by the Russian central bank. 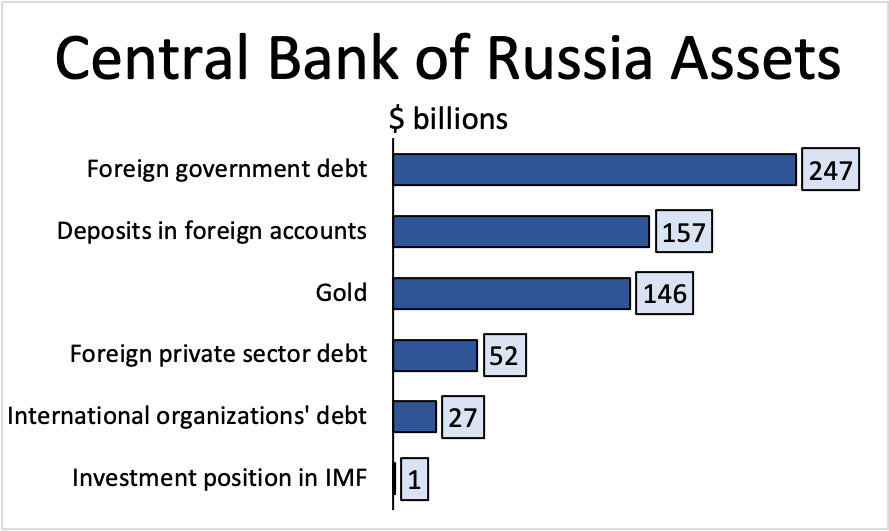 Source: Prepared by the author with data from the Bank of Russia. Data are estimates based on June 2021 asset-type breakdown and January 31, 2022 total reserves.

As can be seen, the majority of the assets are made up of foreign government debt and deposits in foreign entities. Gold is a very important asset of Russia’s central bank; in fact, gold holdings are substantially higher there than in other central banks around the world. The gold could give the ruble some long-term stability, and, if located in Russia, it is not subject to seizure by foreign governments.

Central banks usually keep the rest of their assets in the country where the assets are issued. So the previous graph does not hint at the damage that could be done by Western governments freezing the assets of Russia’s central bank. After all, if most of the assets were Chinese government debt and China did not participate in the sanctions against Russia, the sanctions would not do much damage.

Therefore, I now examine the currency in which the Russian central bank’s assets are issued to analyze the possible impact of some Western countries’ freezing its accounts. 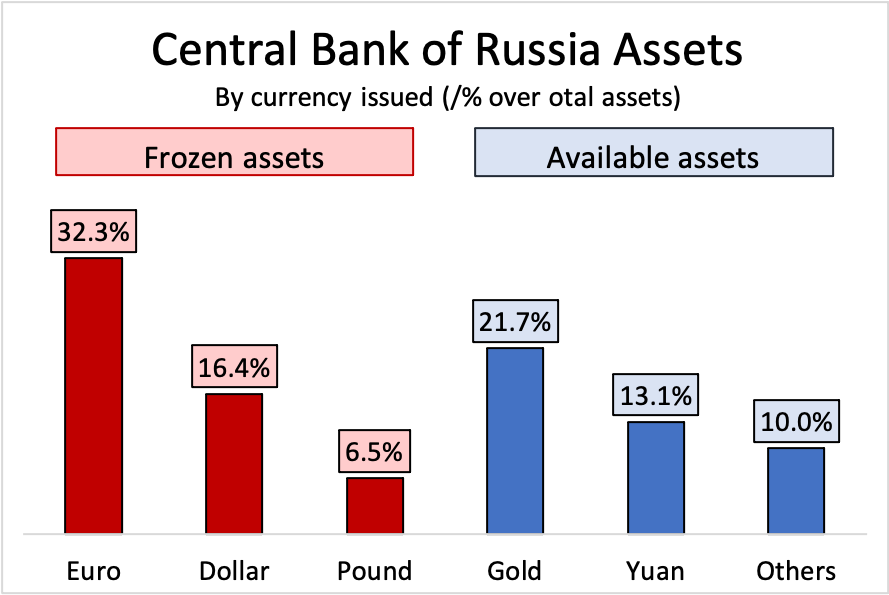 Source: Prepared by the author with data from the Bank of Russia. The data refer to June 2021.

Most of the reserves are invested in assets issued in euros. The dollar’s weight is also significant, while the pound’s is marginal. These are the bulk of the assets that have been frozen by Western governments. The sum of the assets issued in euros, dollars, and pounds is 55.2 percent of the Bank of Russia’s total assets. Western governments have frozen a whopping almost-$350 billion belonging to the Russian government.

This measure is a missile to the Russian government’s economic waterline. Russia has been left unable to defend its currency. Faced with this weakness and inability to react, panic has set in and the sale of rubles has skyrocketed.

The Ruble-Dollar Exchange Rate in February

The following graph shows the war’s initial impact on the massive sale of rubles. However, as the war was expected to be short and the sanctions were almost nonexistent, it was speculated that the economic impact of the war would be minimal and the sale of rubles did not reach panic levels. The Bank of Russia probably sold assets and repurchased enough rubles to ensure the exchange rate did not skyrocket. However, the markets opened on Monday, February 28, with an enormous depreciation of the ruble. 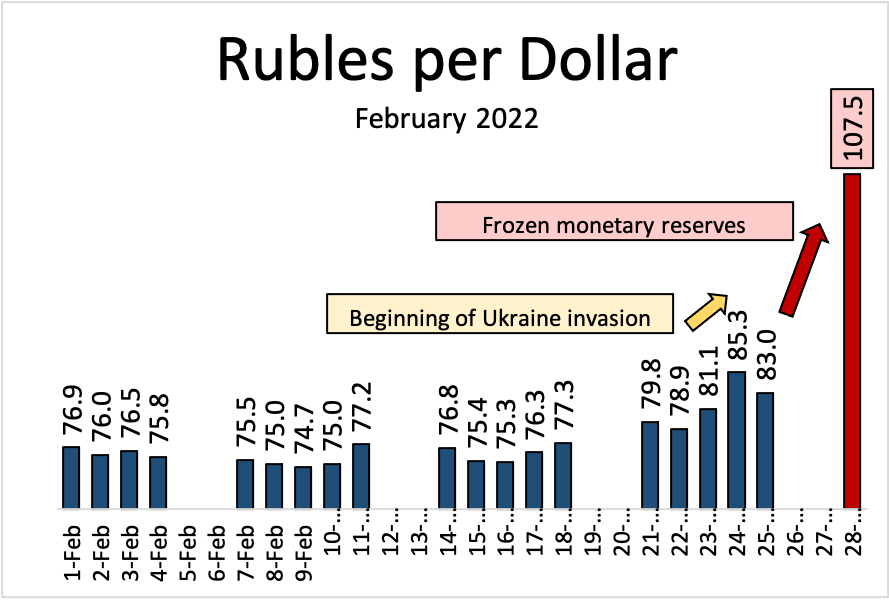 Source: Prepared by the author with data from Investing.com and Xe.com.

The central bank’s loss of control of over half its international reserves has seriously damaged the Russian economy. Perhaps it is the reason Putin has threatened to put Russia’s nuclear arsenal on alert, which is probably nothing more than an intimidating maneuver. It is clear that this sanction, unlike the prior ones, is a headache for Putin.

What about the Expulsion of Russian Banks from the SWIFT System?

The new round of sanctions includes the expulsion of some Russian banks from SWIFT, the international payments system.

In another article, I discussed how being kicked out of the SWIFT system could deal a very hard blow to the Russian economy. It appears, however, that only some Russian banks will be kicked out of the international payments system. While this is undoubtedly inconvenient for the banks and their customers, if some Russian banks still have access to the system, Russia is not really being disconnected from SWIFT. The banks that have not been kicked out of SWIFT will simply be used as correspondent banks (that is, intermediaries) for the disconnected banks. Furthermore, there are exceptions for energy sales, which means that many other transactions will probably be redenominated as transactions of some energy-related component.

In other words, this expulsion from the SWIFT system is probably nothing more than a dead letter. The truly important step is the one analyzed in this article: freezing the Russian central bank’s assets is what is really creating an enormous problem for the Russian economy.

What Will Happen if Russia Still Cannot Access Its Monetary Reserves?

The Russian central bank has just raised the benchmark interest rate from 9.5 percent to 20 percent in an attempt to curb the flight and overselling of rubles. It is most likely that this measure won’t do much, but the central bank probably needed to try to do something. Unfortunately, Russian citizens will soon suffer the excesses of the war.

Ultimately, Western countries have taken an aggressive action this time, one with the potential to do significant damage to the Russian economy. Unfortunately, the effects will be suffered by millions of Russians who have very little do with the war in Ukraine. But that is the way with wars: even the victorious suffer enormous costs, both economically and in the loss of human lives.

The West has decided not to go to war with Russia directly, but after hesitating for a few days, it has decided to engage in an economic war. Now it remains to be seen whether Putin will shut down the flow of gas to Europe from Russia. If this happens, it could be a huge disaster for the electricity sectors in many European countries. However, I have already discussed this here, and I will probably discuss it again in my next article.