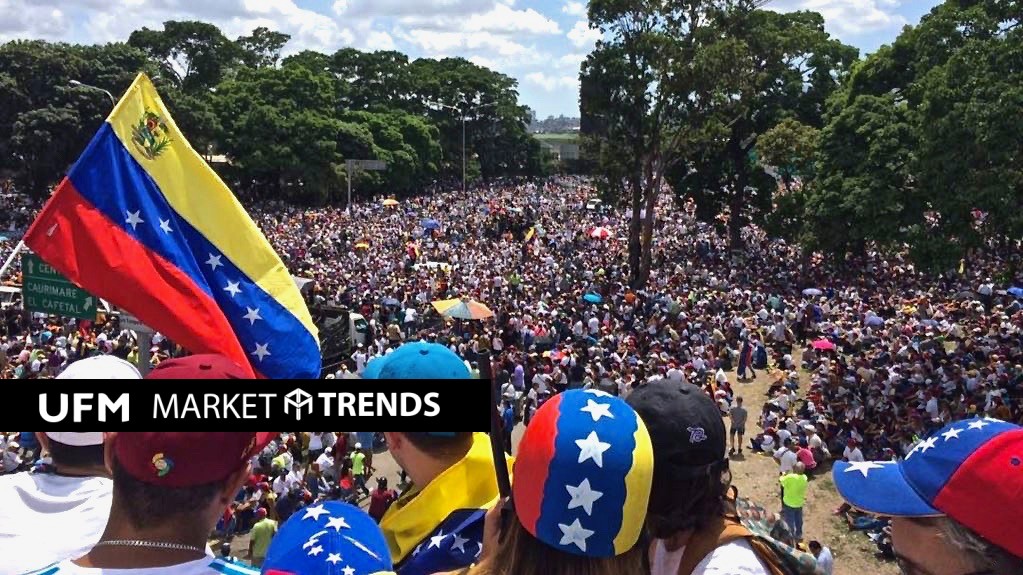 In April 2019, the Center for Economic and Policy Research (CEPR) published a report called Economic Sanctions as Collective Punishment (Weisbrot and Sachs 2019). The report tries to evaluate the consequences of the economic sanctions the United States imposed on Venezuela in August 2017. In it, the authors conclude that said sanctions decreased the population’s daily calorie intake, increased the mortality rate, and displaced millions of Venezuelans as a consequence of the worsening economic depression and hyperinflation.

However, in May 2019, a report was published by Brookings that refutes these claims. This new report, Impact of the 2017 Sanctions on Venezuela: Revisiting the Evidence (Bahar, Bustos, Morales, and Santos 2019), finds that the methodology Weisbrot and Sachs utilized did not allow them to estimate the causal effect of the sanctions and that accordingly their conclusions are incorrect for two reasons. First, in the absence of an adequate counterfactual, the effects of the sanctions cannot be separated from the negative economic trends in Venezuela that preceded them. Second, the deterioration observed by Weisbrot and Sachs could also be explained by other, more important factors beyond the 2017 sanctions that have not been taken into account.

If we stick to the data, regardless of which socioeconomic indicator we choose, it seems clear that the sharp economic downturn began long before 2017.

Prior to August 2017, international markets had already stopped the flow of credit to Venezuela. The spread of Venezuela’s sovereign debt — the premium that holders of sovereign bonds demand that the country pay above the “risk-free” rate — was on average 2,884 basis points in the 30 days before the sanctions were announced. This is 7.8 times more than the margin paid by the rest of Latin America and 9.5 times more than what was paid by emerging markets during the same period. As can be observed in the following graph, the imposition of sanctions did not have an impact on the Venezuelan spread.

On the contrary, the spread only increased – by 1,013 basis points — , when Nicolás Maduro announced the creation of a commision for refinancing and restructuring Venezuela’s foreign debt. The data indicate that by August 25, 2017, the Venezuelan government’s capacity to issue debt was either severely limited or nonexistent and investors had already discounted possible sanctions and their potential impact.

However, although the trends seem similar for the period selected by Weisbrot and Sasch, they differ significantly if we go back further back in time.

Therefore, it would not be reasonable to expect parallel trends after the sanctions. In fact, the evolution of Colombia’s oil production is due to very different underlying factors, which would explain the different trends. Some analysts agree that the fall in Venezuela’s oil production is nothing more than a continuation of a decline that began with the dismissal of more than eighteen thousand workers from PDVSA (the state-owned oil and natural gas company) after the national strike during Hugo Chávez’s presidency. This dismissal resulted in an important loss in administrative and technical capacity (Forero 2003). Even during the golden age of oil, 2004–14, Venezuela’s oil production fell by 24 percent between 2005 and 2016. 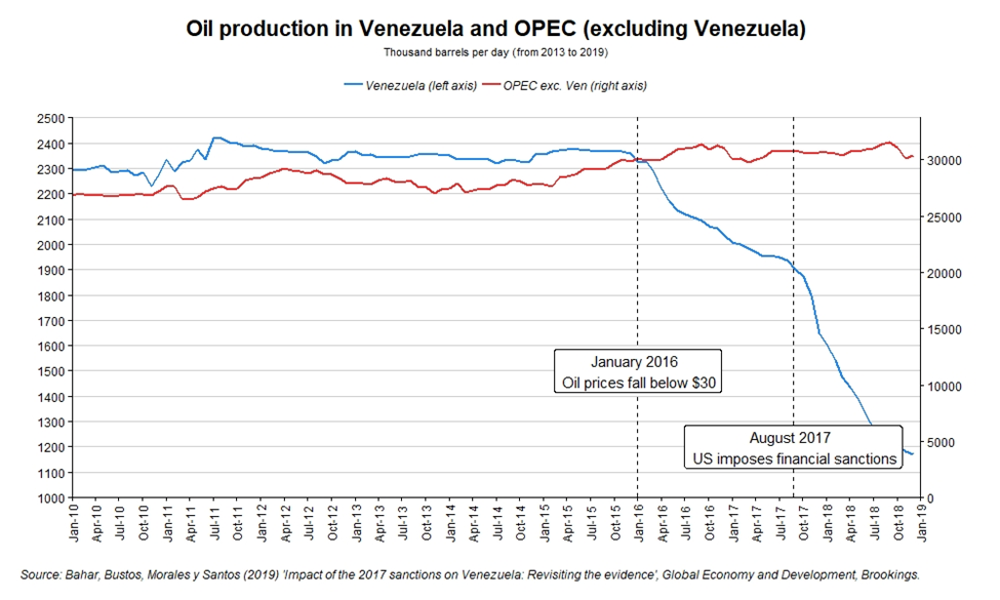 Can we conclude that the difference in oil production between OPEC countries and Venezuela is a result of the sanctions? Based on the data, the answer is no. In fact, there is no counterfactual that is appropriate for analyzing Venezuela’s oil-production trends.

Weisbrot and Sachs’s work attributes the negative performance of Venezuela’s socioeconomic indicators entirely to the August 2017 sanctions. They argue that Venezuela lacks enough foreign currency to import food and medicines to satisfy the population’s basic needs because of the fall in oil production and the consequent decrease in revenue. In contrast, Brookings’s new report concludes that it is impossible to measure the effect of the observed decrease in production before the sanctions. Furthermore, the significant deterioration in Venezuela’s socioeconomic conditions began in 2013 and cannot be observed in any other part of the region.

The following image shows the value of food imports from Latin America over time. In 2016, the year before the sanctions were imposed, Venezuela was already importing 71 percent less than its maximum in 2013. 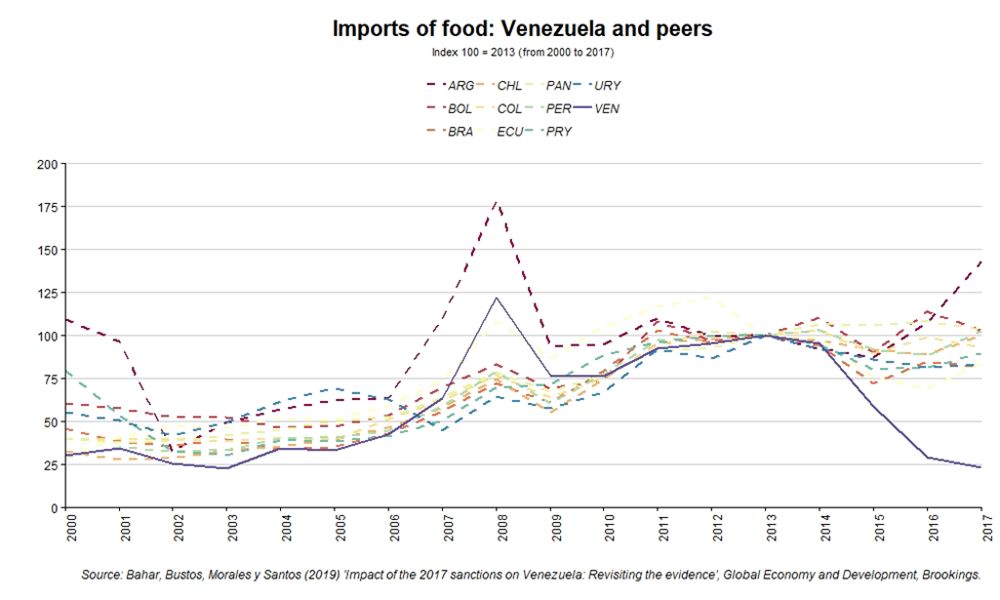 Something similar occurred with imports of medicine and medical equipment. Venezuelan imports fell by 68 percent between 2013 and 2016, whereas they stayed constant in the rest of the region. In other words, most of the fall happened before the sanctions in August 2017. By the end of 2017, Venezuelan imports of these basic sanitary products constituted only 8 percent of the amount observed in 2013. 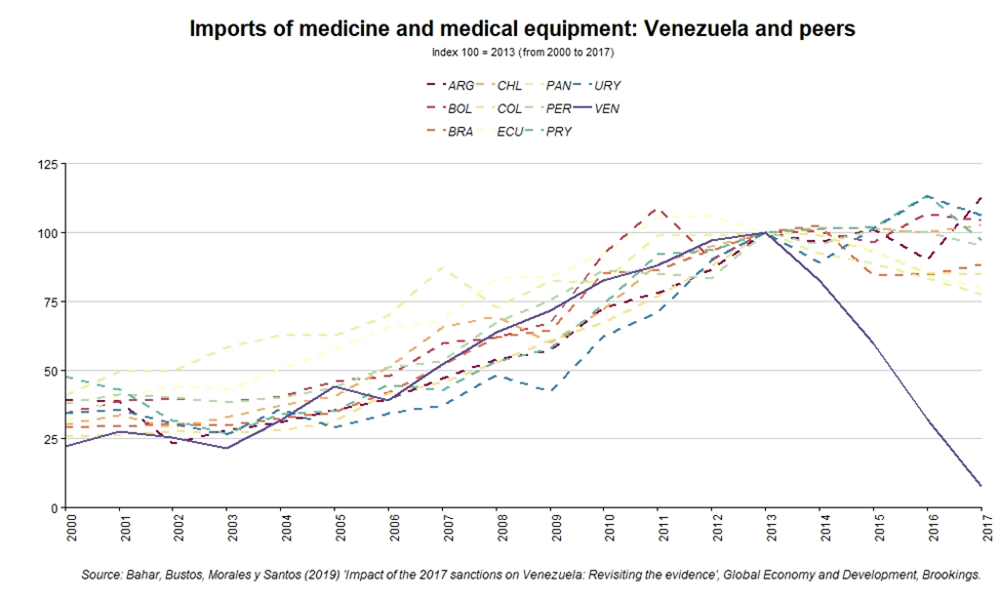 Next, the daily measure of the purchasing power of the Venezuelan minimum wage is analyzed in terms of the cheapest calories available, calculated by Douglas Barrios of the Center for International Development at Harvard University (CENDAS, for its acronym in Spanish). Using the prices reported by CENDAS for fifty-eight products at more than fifty points of sale in the metropolitan area of Caracas, they obtained the maximum quantity of daily calories that can be purchased with a minimum wage, on average, for every month between 2010 and 2018. As can be seen in the following graph, there has been a sharp reduction in Venezuelans’ calorie intake, but this decrease began long before the sanctions of 2017. 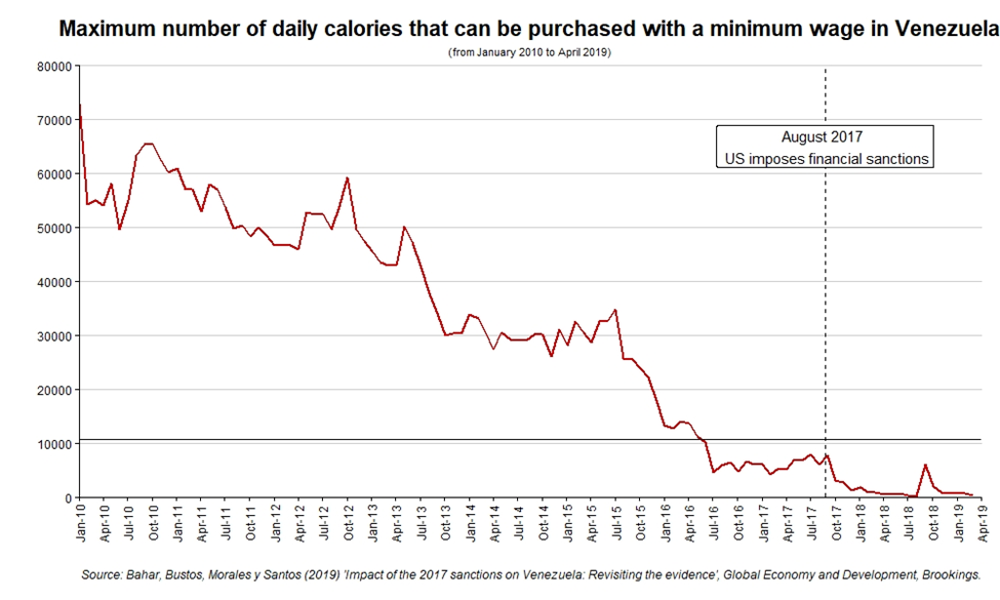 The data show that at the moment when the sanctions were imposed, an entire minimum wage could only buy 6,132 of the cheapest calories available per day, 92 percent less than in January 2010. This represents only 56 percent of the minimum dietary needs of a family of five people, which is estimated to be 10,800 daily calories. While the purchasing power of the minimum wage continued to decrease after August 2017 (at levels that only enable the purchase of hundreds of calories), it is impossible to determine how much of this decrease was simply a continuation of the strong trend observed before the sanctions were imposed.

Weisbrot and Sachs also associate a 31 percent increase in the overall mortality rate recorded in Venezuela between 2017 and 2018 (according to their own sources) with the sanctions, concluding that they have been directly responsible for forty thousand deaths. These data have supposedly been extracted from an internal report by the United Nations about Venezuela, Overview of Priority Human Needs (March 2019), which, it seems, is not publicly available. Therefore, to make a comparison that is objective and publicly available, we use data on infant mortality are used because it is often recognized as a good indirect measure of the overall quality of public health services.

Although it is probable that the sanctions have had some impact on oil production in Venezuela, the analysis in Brookings’s report does not find sufficient evidence to conclude that the sanctions were responsible for the worsening of the socioeconomic crisis. At this moment, there are not sufficient publicly available data to rigorously estimate a causal effect. The Brookings report therefore concludes that most of the deterioration of socioeconomic indicators occurred prior to the sanctions of August 2017. In fact, a large part of the suffering and devastation in Venezuela has been inflicted by those in power since 1999 and not as much by the sanctions imposed in 2017.

Jon Aldekoa Vázquez studies Business Administration and Finance and is currently finishing a degree in Physics. He is a member of the Juan de Mariana Institute (Spain) and also collaborates with Students for Liberty and the Friday Club.