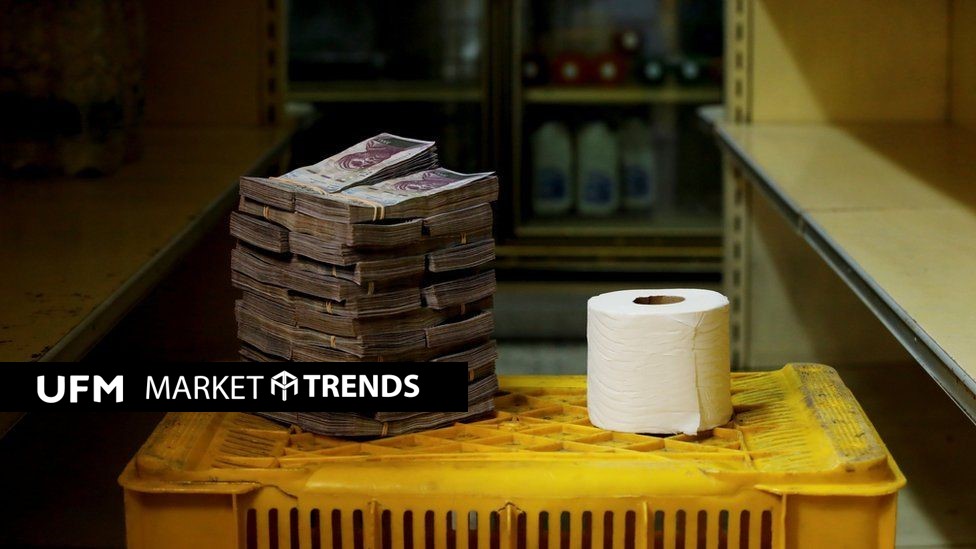 Venezuela is the fifty-seventh country to encounter hyperinflation[1] in modern history. The economist Steve Hanke estimated—using the doctrine of purchasing power parity (PPP)[2]—that the country’s monthly inflation exceeded 50 percent for more than thirty days in November 2016. Therefore, it entered the list of Hanke-Krus hyperinflations.[3] The International Monetary Fund (IMF) estimates that Venezuela’s annual inflation will reach 1,000,000 percent by the end of 2018, and the country’s National Assembly recently estimated that it would reach 4,000,000 percent.

Notwithstanding the estimates, predictions made in hyperinflationary periods are always erroneous because inflation volatility increases along with inflation rates. 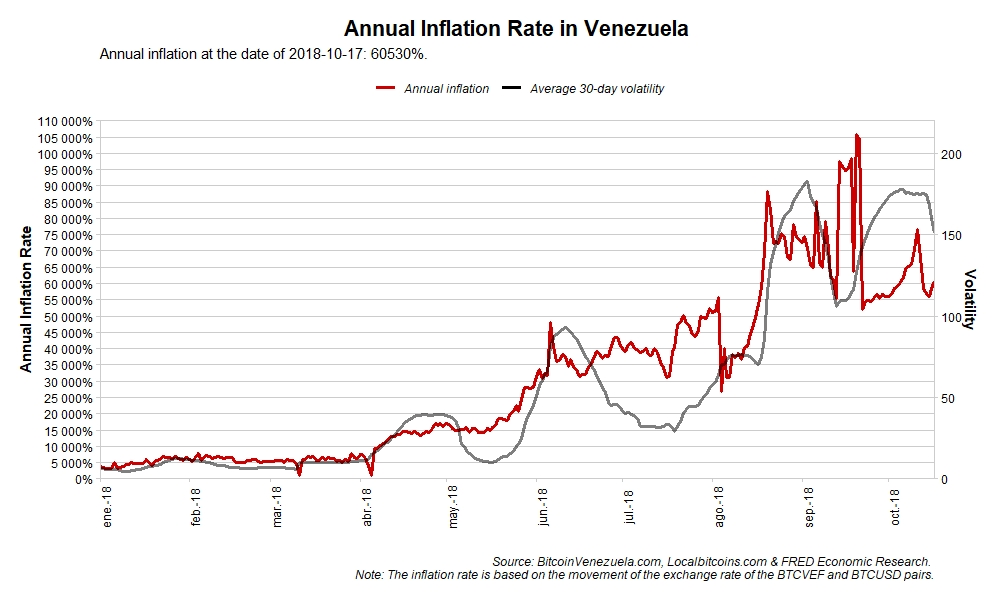 As shown in the graph above, annual inflation calculated on October 2 was more than 56,000 percent. If we look at the average volatility calculated thirty days prior, it increases at the same time. 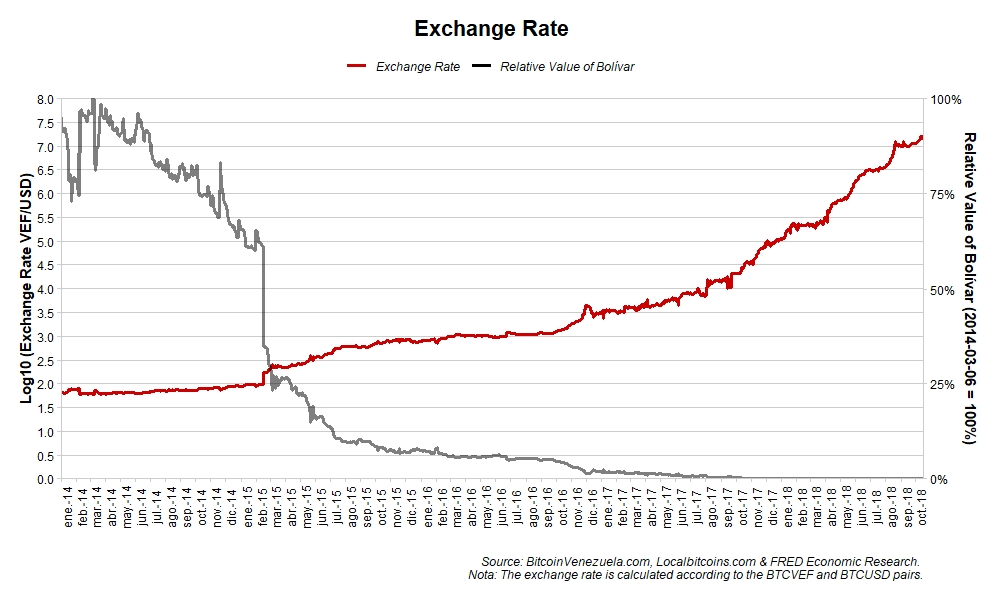 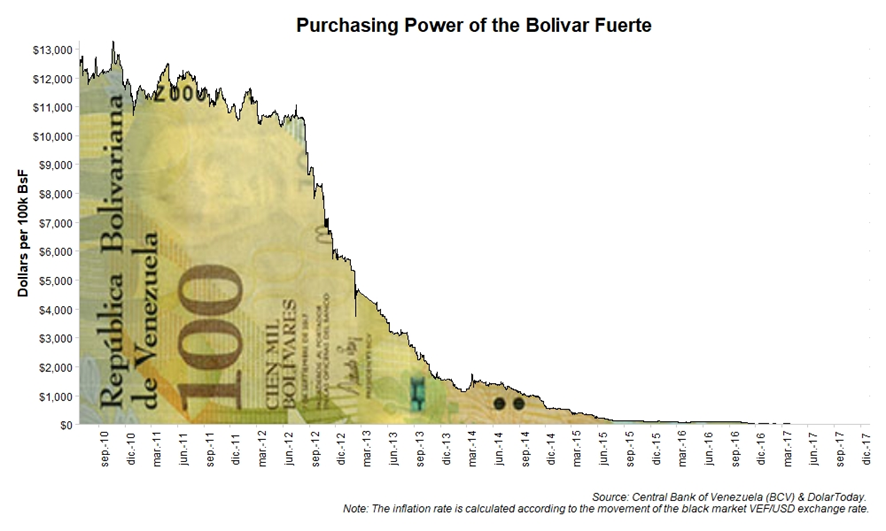 The creation of new denominations for the Venezuelan currency do not seem to have helped abate inflation and will probably not do so in the future.

On August 20, the new set of currency, the bolivar soberano, came into circulation at an exchange rate of 100,000 bolivares fuerte (Bs.F) for every bolivar soberano (Bs.S).[4]

Even though money supply has multiplied by 100,000, the great inflation that this country has suffered has caused its real stock of money to fall by a factor of eight in the last seven years. Currently, there are $500 million worth of bolivars in circulation, compared to the $4,000 million that were circulating at the end of 2010. The fall in the stock of money is a typical effect of hyperinflations.[5] 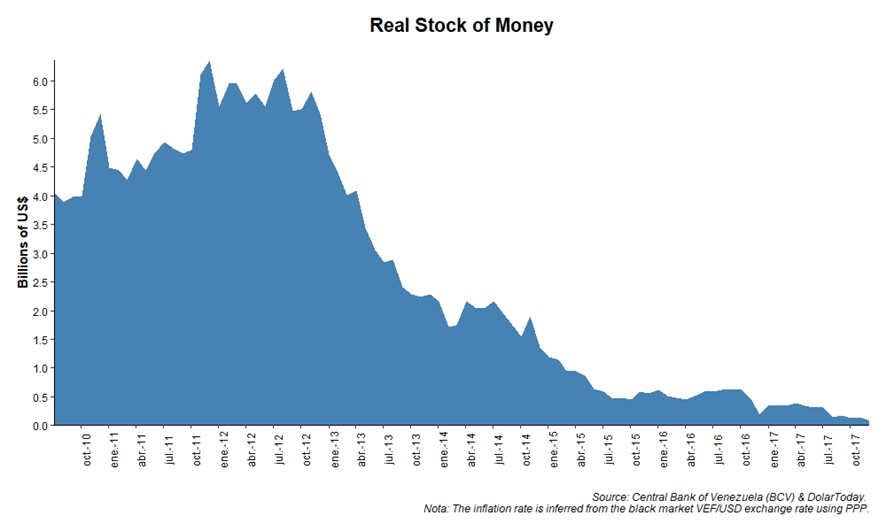 If we look at the monetary aggregates M0 and M2, we can see that they have had an exponential expansion. The quantitative theory of money would indicate that this large monetary issue would be the cause of the hyperinflation that Venezuela is experiencing. 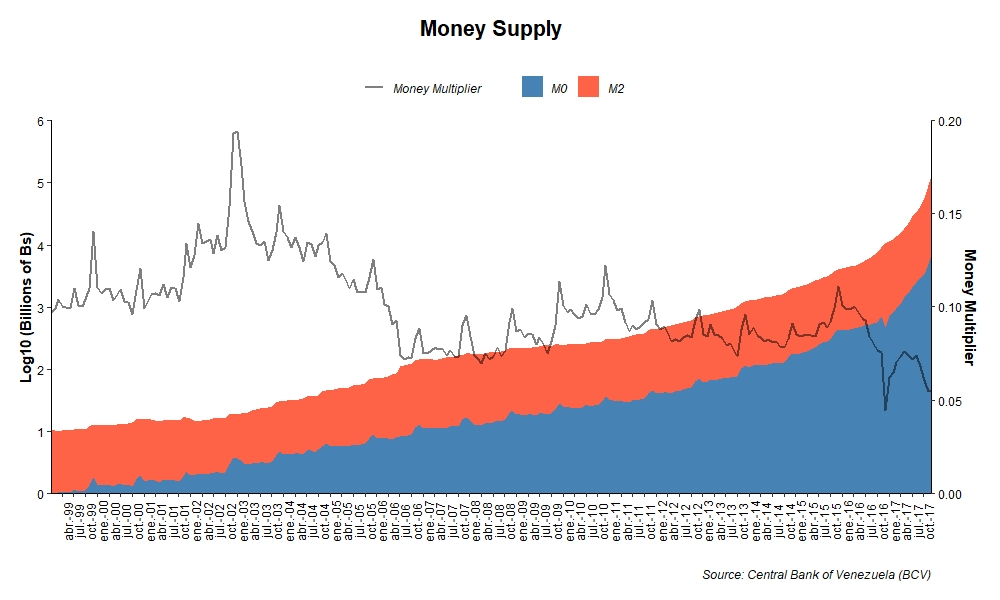 The money multiplier (M2/M0) has plummeted during the last few years. This indicates that the broader money supply measured as M2, is converging toward the monetary base (M0). This has caused a liquidity crisis. Almost all liquidity (95 percent) is in electronic money (demand deposits and transferable deposits). Only a small part of the money supply (5 percent) is physical. 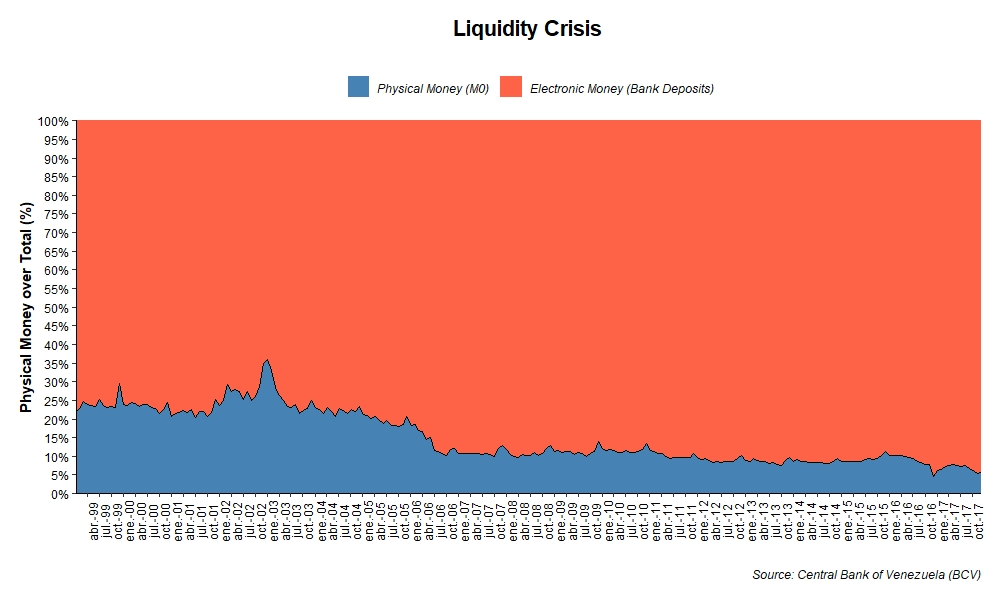 Because there are not enough bills in circulation, the price of products paid for in cash can be up to four times lower than if they are paid for by transferring demand deposits. Because of the lack of cash, banks have been forced to introduce a bank freeze (corralito) in which only 10 Bs.S per person per day can be retrieved from an ATM or a bank account. Furthermore, because of a lack of payment terminals and because almost all payments are made by debit card, large lines form in retail establishments.

Despite the enormous wealth of this oil-producing country, the fall in the price of crude oil, the drop in production, and the great expense of the social programs it has implemented throughout the years have caused it to move from a trade surplus to a trade deficit of 30 percent in 2017, according to IMF estimates. 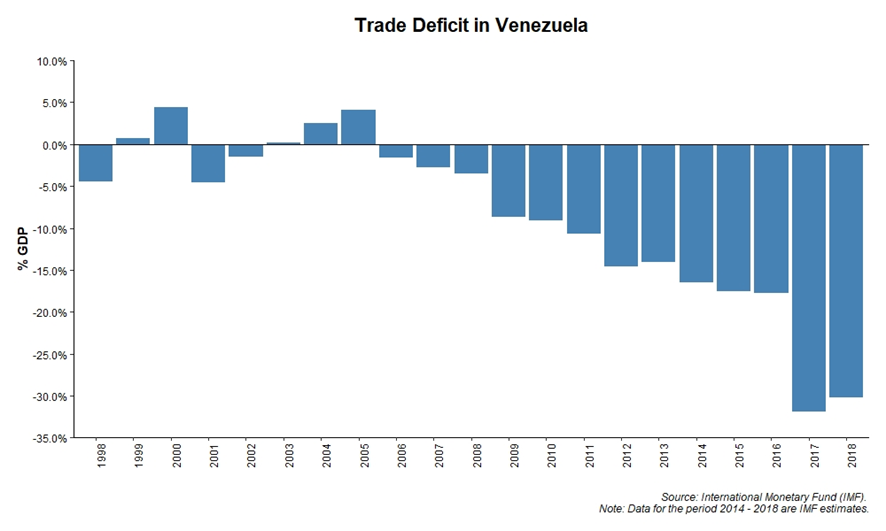 Part of this deficit has been financed through international reserves, which have been shrinking alarmingly for years, as can be seen in the graph. 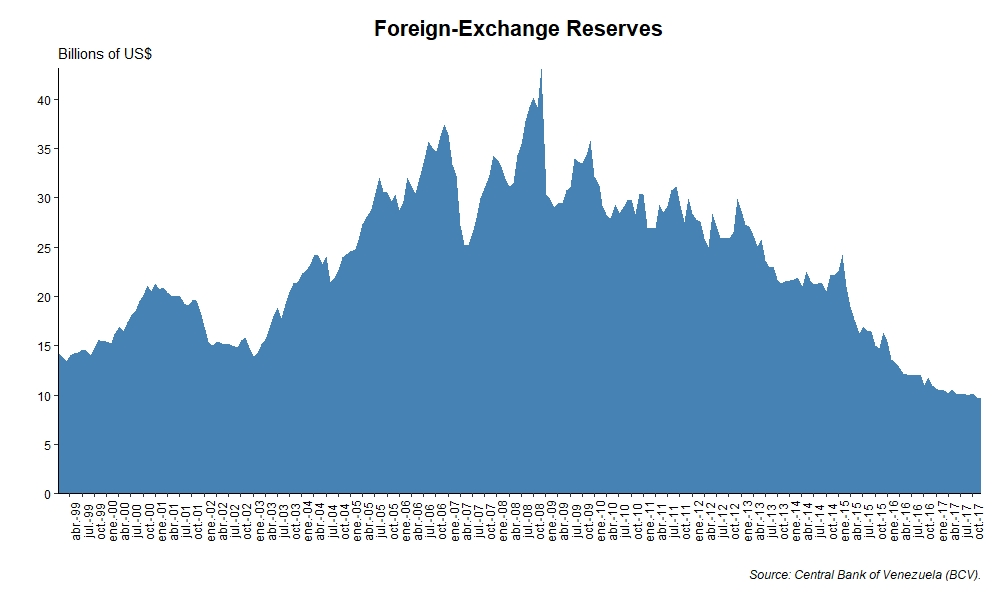 Can we be sure that the large issuance of money along with the stock of international reserves is what has been used to pay the country’s trade deficit? Everything seems to indicate so. If we use Peter Bernholz’s model, we can see that the correlation is almost perfect (see graph below).[6] 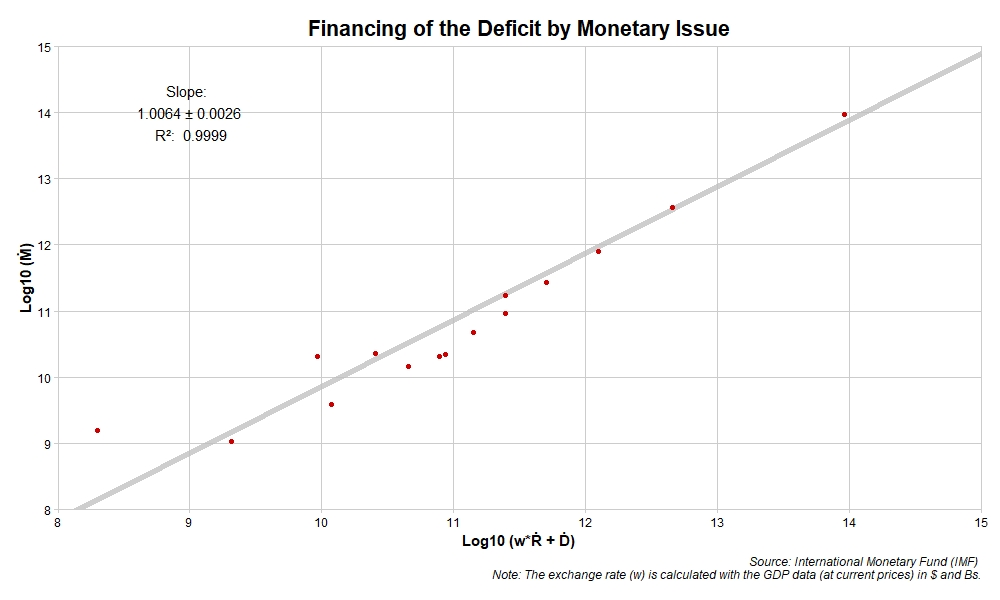 We use a logarithmic scale to better visualize the data. The coefficient of determination R2 and the slope of the linear regression line were obtained before applying the logarithmic transformation. The equation  expresses that the variation of international reserves (Ṙ) converted according to the exchange rate (w) into Bs. and added to the variation of the deficit (Ḋ), is equal to the monetary variation (Ṁ). In other words, the equation indicates whether the increase in a country’s stock of money and its change in international reserves—presumably negative—has been used to pay the trade deficits that are incurred each year. This matches almost perfectly with the annual data we have. Therefore, we can conclude that the increase in the stock of money and the decrease in Venezuela’s international reserves have been used almost completely to pay the trade deficit generated by the government.

The future of the country is more than black. International reserves will be depleted, the monetary expansion will not serve to pay the deficit, and inflation will continue to rise. In the future, Venezuela must obey the fundamental laws of economics. The damage has been high: it has provoked the Bolivarian Revolution, the Chávez-Maduro regime, the worst crisis in the history of the country, and the largest migratory movement in the history of the American continent.

Jon Aldekoa Vázquez studies Business Administration and Finance and is currently finishing a degree in Physics. He is a member of the Juan de Mariana Institute (Spain) and also collaborates with Students for Liberty and the Friday Club.