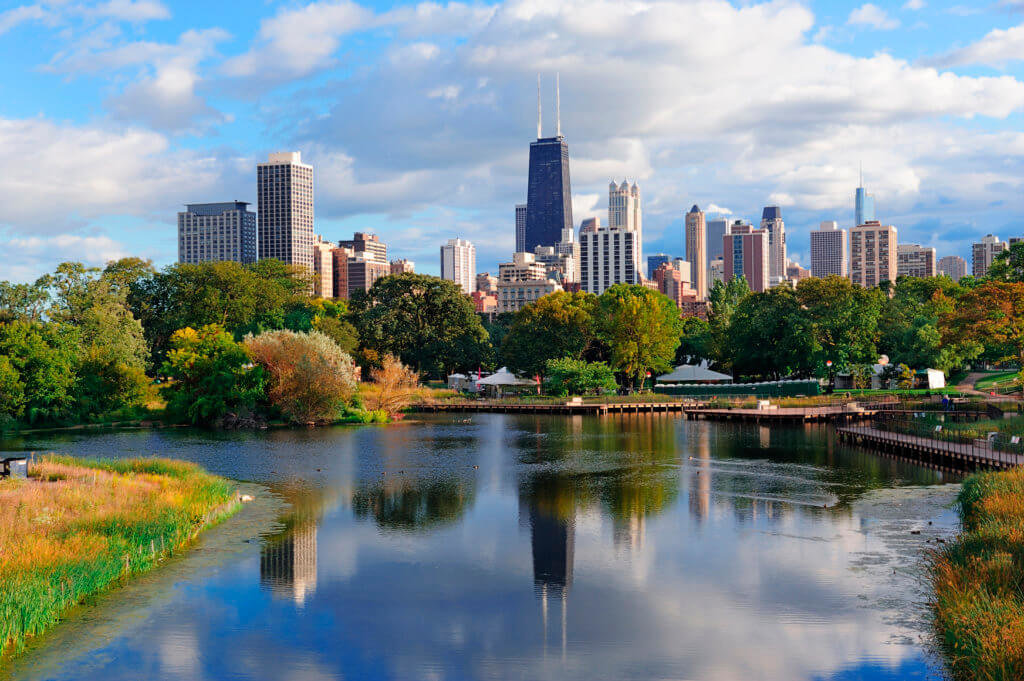 Capitalism is incompatible with the conservation of nature. Only the places with a strong state and restricted economic freedom can achieve high environmental quality ratings. These statements have been repeated so often that most people consider them true without giving them a slightest thought.

Although these theories usually only explain one side of the coin, there are at least two groups with opposing theories:

To find out which group’s theory is closest to reality, we analyze data on economic freedom and environmental quality.

What Does the Data Tell Us? 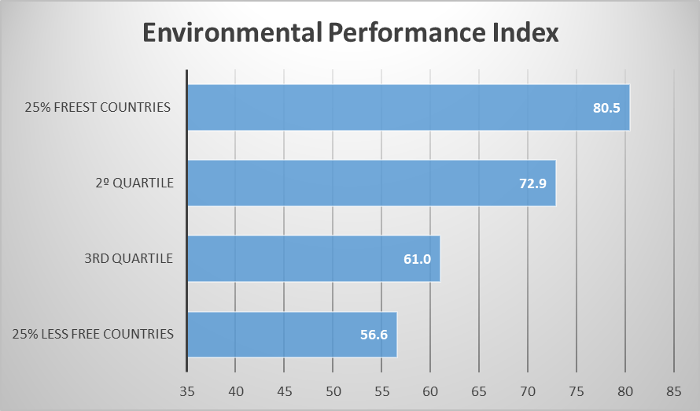 Source: Heritage Foundation. Yale.edu. There are no countries with a score lower than 35 points in the Environmental Quality Index.

The scatter plot shows how the relationship between economic freedom and environmental performance is positive. Each point in the diagram represents a different country. 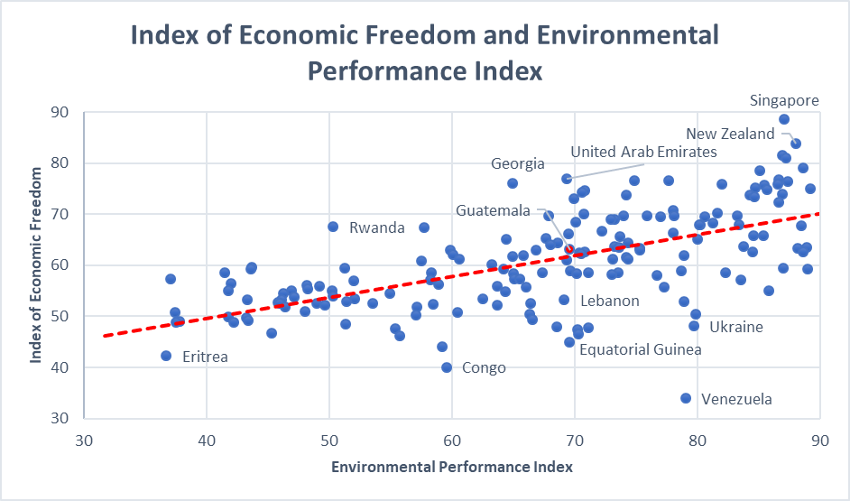 However, the relationship between these variables is not static. In the end, environmental quality could deteriorate as a result of laissez faire policies in the long-term. To whether this is true, we examined the Environmental Performance Index with the average of the Index of Economic Freedom for the last 15 years. Once again, each point in the diagram represents a different country. 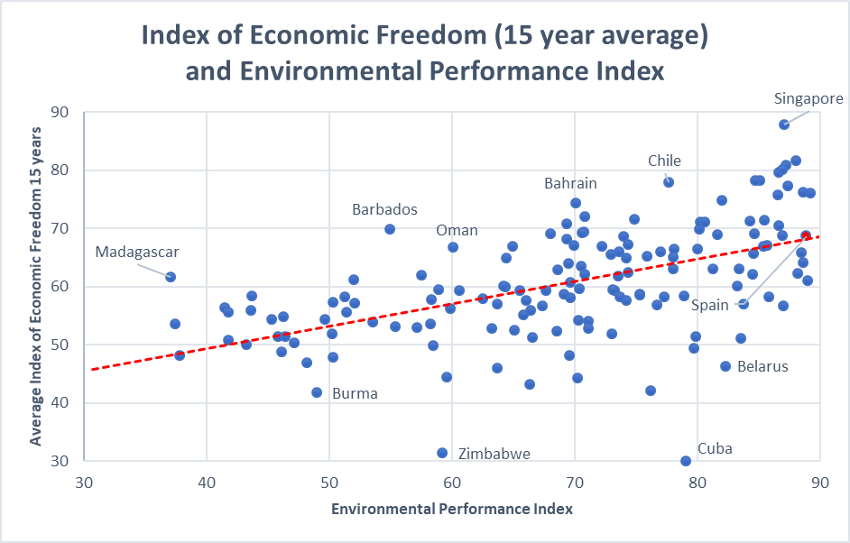 Once again, we can observe how countries with greater economic freedom, throughout time, have a better environmental performance.

One possible criticism of the argument presented here could be the following: the countries with greater economic freedom—and the most prosperous ones—are “exporting” their polluting industries to the less free third world, while keeping non-polluting industries in their country. Large companies based in the first world would take advantage of the failed governments of the developing world, polluting there what they are not able to back home.

To see whether this is true, we would expect that the countries with a large influx of foreign direct investment to have a bad score on the Environmental Performance Index. However, this is not the case. 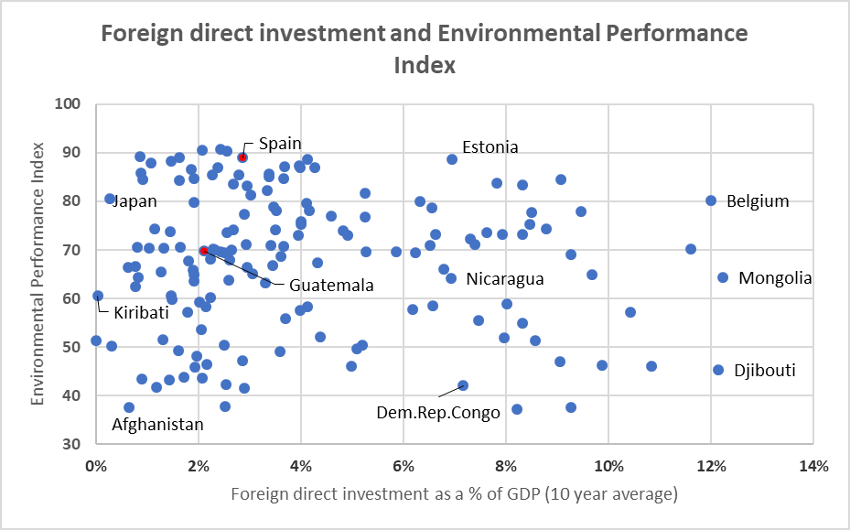 The criticism seems to lack evidence. The relationship between both variables is non-existent, the level of foreign direct investment fails to determine the level of environmental performance. We cannot confirm that free—and rich—countries export their pollution by relocating companies to less free countries. However, we can confirm that greater foreign direct investment “exports” good environmental practices to developing countries. 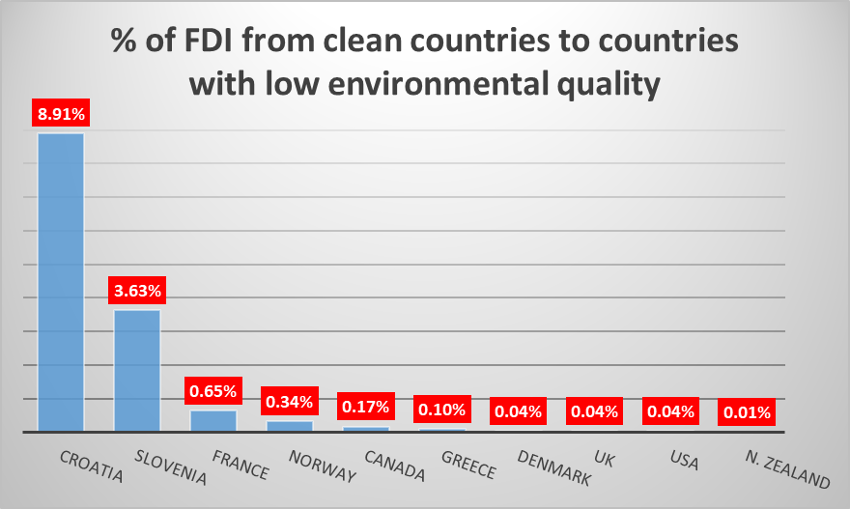 What About Investment in Mining & Extraction?

It is often said that extraction industries tend to pollute and degrade the environment more than other sectors. Furthermore, these sectors tend to have bad press. Therefore, it could be that total foreign direct investment has no relation to environmental quality, but it could also be that foreign direct investment has a stake in extraction industries, having a negative impact on the environment. 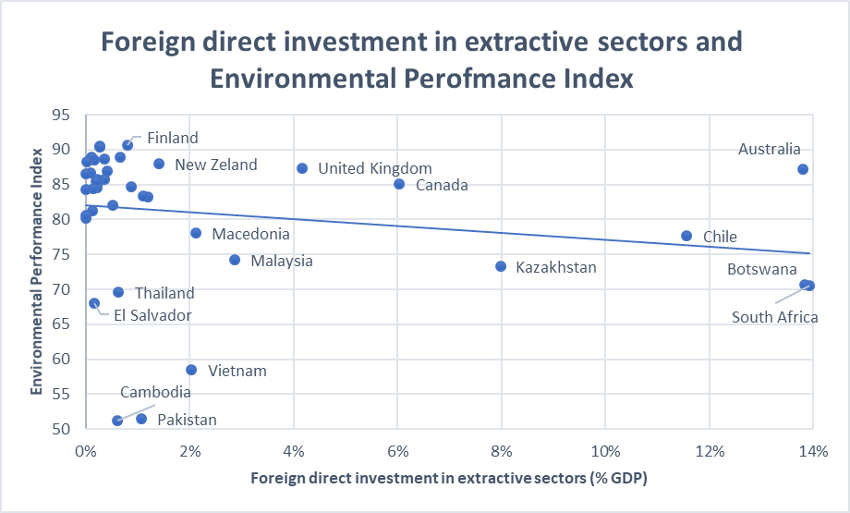 Even if there is greater economic freedom in the recipient country, a large investment in extraction industries does not degrade the environment.

Correlation Is Not Causality

The best criticism to this article could read as follows: “very well, but the data exposed here does not prove anything, it only shows correlations and does not show causality.”

Indeed, causality is explained by a theory or a set of logical relationships that aim to unite different events and give shape to a complex world that is perceived as chaotic. In other words, data does not speak for itself, it is interpreted through theories.

There are theories explaining how the freest countries, besides being the most prosperous, tend to take better care of the environment. In the same way, there are theories that expose the contrary relationship: the greater the economic freedom, the more degraded the environment. Both theories are based on opposing world views, what makes it interesting is comparing these theories with the available data. With the data at hand, it seems that the theory closest to reality is the one that claims that better economic freedom generates better environmental results. This relationship is not irrefutable; good environmental quality depends on many other variables. However, it is clear that as capitalism advances, so does the environment.

With the data analyzed, we can see that capitalism suits the environment. The greater the economic freedom, the better the environmental quality indexes.