One of the most relevant news stories of last year, if not the most important in the world of finance and economics, was the 0.25% increase of the Federal Funds Rate by the Fed on December 16. The increase marks the end of a period where U.S. interest rate had been close to 0%. Furthermore, the Fed announced it would possibly continue to raise interest rates throughout 2016. The interest rate is important for the country’s financial conditions, but given the importance of the United States, the rate is also relevant to international markets. Central banks around the world are reacting differently to the rate hike, causing uncertainty, volatility, and arbitrage opportunities in financial markets.

The day after the Fed’s announcement, the central banks of Mexico and Chile raised their interest rates proportionately by 0.50%, to 3.25% and 3.5% respectively. Both central banks claimed to have increased their rates due to inflation expectations and to avoid currency depreciation. However, it is important to mention the economies and interest rates of these countries have had a negative impact due to low oil prices, commodities, and the slowing Chinese economy. This decision was not just the result of future expectations, however, but was also a reaction to what the economies suffered in 2015. Among the group of central banks that raised interest rates, we could include the United Kingdom. For the last couple of years, the central bank of the UK and the Fed have followed similar monetary policies.

It is clear that there are inconsistent monetary policies around the world, particularly among the principal countries of the world economy. Not only are the policies of the United States, the United Kingdom, and the Eurozone inconsistent, but also the policies from the BRICS economic group. Central bank polices do not need to be consistent among themselves. However, when they are inconsistent, they send false signals to individuals and opportunities of arbitrage and carry trades arise. Ever since the Eurozone started its quantitative expansion in 2015, these opportunities have only increased.

With the United States dropping quantitative expansion and the Eurozone recently implementing it, a new phase of highly inconsistent monetary policies started. This inconsistency was magnified at the end of the year when the Fed raised interest rates. Not only does the inconsistency increase arbitrage opportunities in the capital and loan markets, it also increases the opportunities of carry trades in currency markets, to mention a few effects. These consequences are manifested with the dollar appreciation and the currency depreciation in emerging countries.  These effects are also reflected when analyzing stock markets and transaction volumes in the financial sector over the last months, and how these intensified as new data emerged, showing the solidity of the American economy.

An example of this is the exchange rate between the euro and the dollar in the last trimester.  The exchange rate varies depending on news from central banks and inflation expectations. It is important to notice the growth on December 4, when data from the United States unemployment rate was published, showing the solidity of the American economy. This was a proxy for speculators that wanted to know the rate. Then, it affected the exchange rate. The change in volatility of the exchange rate can be seen in Graph 1. 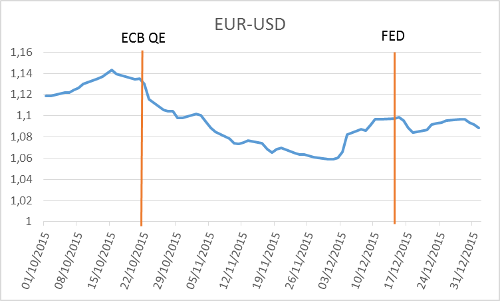 The exchange rate alone does not indicate much. It is important to see the transaction volumes in the currency markets, specifically those of the EUR-USD exchange. The transactions presented are those generated at 10:00 AM GMT. Graph 2 illustrates the volume affected and records a change with the news. Again, December 4 marks the difference in the observed range, reaching a peak in the number of transactions. On December 25, the line almost reaches zero, but it is a holiday in which not many transactions are made. Then, transactions resume, but the tendency is negative. To get a better picture, we should still analyze the economic transactions when they resume after the holidays. 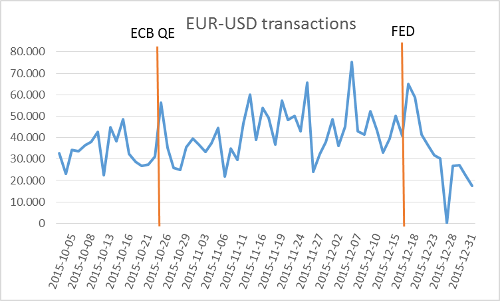 Without going into too much theoretical detail on whether the policies are good or bad, and whether they are necessary, we have to analyze their consequences. A phase of high volatility in financial markets is approaching, along with currency appreciations and devaluations that will affect international commerce, insolvency periods and delays in debt and bond payments given the high interest rates, effects on unemployment levels, among others. All of these will affect the real economy, but above all they will affect the quality of life of individuals, positively or negatively. A proxy of this would be to analyze how stock markets react, because they show how currency preferences are an indicator of the solidity derived from central banks’ decision.

The unintended consequences of these inconsistent monetary policies are not manifested in the same way in each country or in each sector of the real economy. To cover this in detail Market Trends will publish sector reports, where we will delve deeper into how all these decisions and policies have affected risk and liquidity levels, and whether they are beneficial or not in that sector.