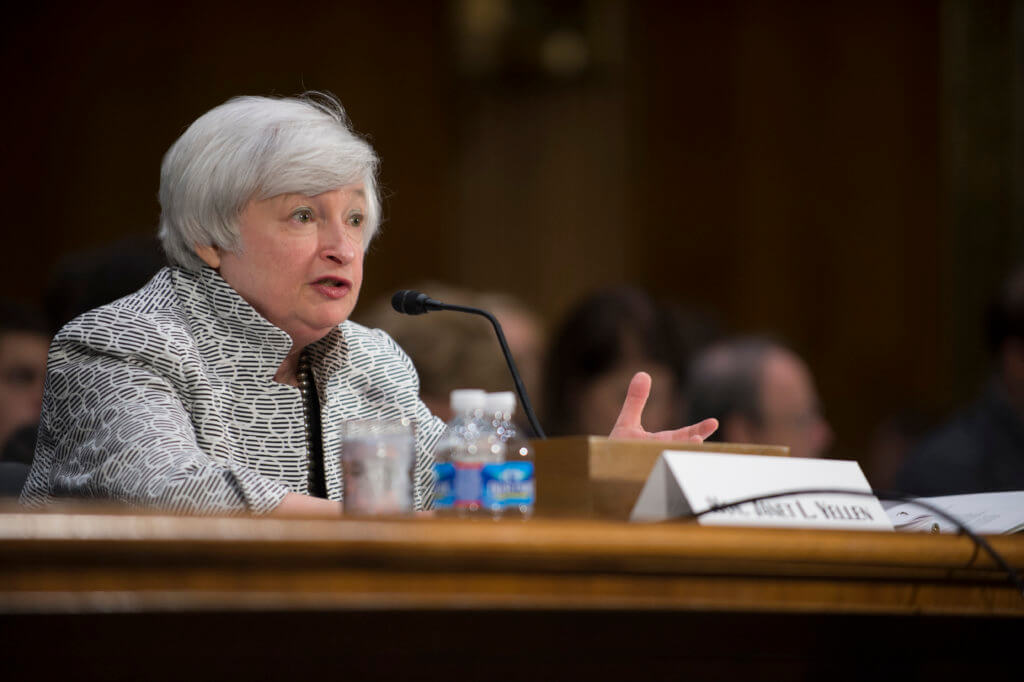 “This Time Is Different”

There is a saying that the four most dangerous words in finance are “this time is different.”

Yield curve spreads are now at their lowest point since 2007, moments before the Great Recession began. Lately, however, the financial press began picking up this worrying trend. In articles published by Bloomberg and Financial Times, various commentators argued that the yield curve, despite its impressive historical track record, will not predict an economic downturn this time around.

Short-term (market) interest rates were already far above 1.5% and continued rising over the past weeks.

Short-term LIBOR rates are increasing rapidly, at a much faster pace than the Fed is currently raising interest rates. Now, interest rates still seem low, but that is beside the point. What counts, is the impact of increasing rates on the cost of servicing debt. Exactly two years ago, the 12-month US dollar LIBOR was as low as 0.5%. Today, that very same interest rate stands at 2%. That amounts to a fourfold increase in interest expenses.

Short-Term Rates Are the Basis for Many Other Loans

Because banks want as little exposure as possible to changes in market interest rates (a commercial bank lives on its interest rate margin), many bank loans are based on an interest rate that consists of two components:

The idea behind this structure is that the liability side of a bank´s balance sheet can be financed roughly at LIBOR. And by investing everything on the asset side against LIBOR plus a premium, profits appear to be guaranteed. Appear, because in the long run profits are only made when the bank can also avoid massive defaults and write-downs on its asset side.

As of today, according to ICE, about $350 trillion (!) of global financial products and loans are linked to LIBOR.

Many mortgage rates are also linked to LIBOR. Yet, for the moment, ever since the crisis of 2008, households have been acting more responsibly with their finances. US households are less leveraged (that is, less indebted relative to their net worth and income) than ten years ago. But these apparently healthy household finances will deteriorate rapidly as soon as the labor market worsens and workers begin losing jobs.

The pain, however, will be coming from elsewhere. What we should be looking at, is the impact of this increase in the 12-month USD LIBOR on the interest expense of corporate businesses. In the third quarter of this year, the total debt of U.S. nonfinancial corporations equaled over six trillion (six thousand billion!) dollars, an all-time record high.

I am not alone in arguing that these corporate debt levels are simply too large. According to a survey by Bank of America among U.S.-based fund managers, a record share (twenty-three percent) of stock market investors think publicly listed businesses are too leveraged. And with corporate debt at a record high, the first dominoes are bound to fall rapidly when interest rates and interest expenses rise even further.

How Vulnerable Is the US Economy to Higher Rates?

Corporate debt is at a record high, but how fragile are businesses to higher interest rates?

As we can see below, the share of zombie firms (across major developed economies) stands at an all-time high of more than 10 percent. These firms are especially susceptible to higher interest rates. 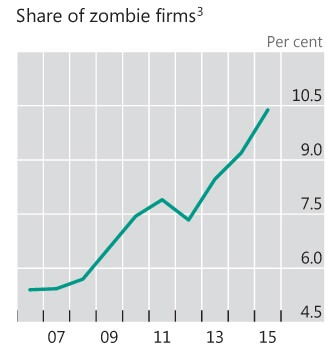 The Bank for International Settlements (BIS) defines a zombie firm as an, at least ten-year-old, publicly-listed firm that incurs higher interest expenses than its earnings before interest and taxes (EBIT). Or, more simply put, firms that earn less than what they pay in interest.

These companies survive only at the mercy of low interest rates and willing lenders (on a side note: many studies show that the higher the share of zombie companies, the lower economic growth). With just a slight increase in interest rates, these zombie firms will see their interest expenses surpass their income. At higher rates, they will no longer be able to service their debt. They are bound to collapse.

But This Time, the Yield Curve Is “Useless”

The Fed, however, is not concerned. Fed Chair Janet Yellen said at her press conference that the yield curve is apparently, which would be the first time in history, of no use. She said the following:

“So this is something that we discussed and have looked at. The yield curve has flattened some as we have raised short rates. Mainly, the flattening yield curve mainly reflects higher short-term rates. The yield curve is not currently inverted, and I would say that the current slope is well within its historical range. Now there is a strong correlation historically between yield curve inversions and recessions, but let me emphasize that correlation is not causation, and I think that there are good reasons to think that the relationship between the slope of the yield curve and the business cycle may have changed.

(…) that means that structurally, and this can be true going forward, that the yield curve is likely to be flatter than it’s been in the past. (…)

Now, I think it’s also important to realize that market participants are not expressing heightened concern about the decline of the term premium, and when asked directly about the odds of recession, they see it as low, and I would concur with that judgment.” [emphasis mine]

“This time is different.”

Where have we heard that before? When the yield curve was flattening in 2005, former Fed Chair Alan Greenspan said that we should not “automatically assume that [an inverted yield curve] would mean what it meant in the past.” In 2006, his successor Ben Bernanke came to a similar conclusion, stating that he “would not interpret the currently very flat yield curve as indicating a significant economic slowdown to come.” Instead, he blamed structurally lower term premiums, just as Yellen tries to do today.

The idea that the yield curve has flattened “some” is completely ridiculous. The last time the yield curve was this flat, was in 2007, right before the Great Recession. But that might be the least surprising of what Janet Yellen said in her last press conference for the year.

Curiously, the Fed is reducing the size of its balance sheet (removing long-term debt from its balance sheet and increasing market supply), while raising short-term interest rates. Given the Fed’s action, the yield curve should be steepening, not flattening. That the very opposite is happening, should worry any observer.

I have no doubt that the impressive track record of this important recession indicator will prove itself yet again. It is only a question of time before yield curve spreads become negative and the yield curve inverts. And this time around, an inverted yield curve will – just as it did in the past – indicate that we are on the brink of a new recession. A recession that has been due for some time now.