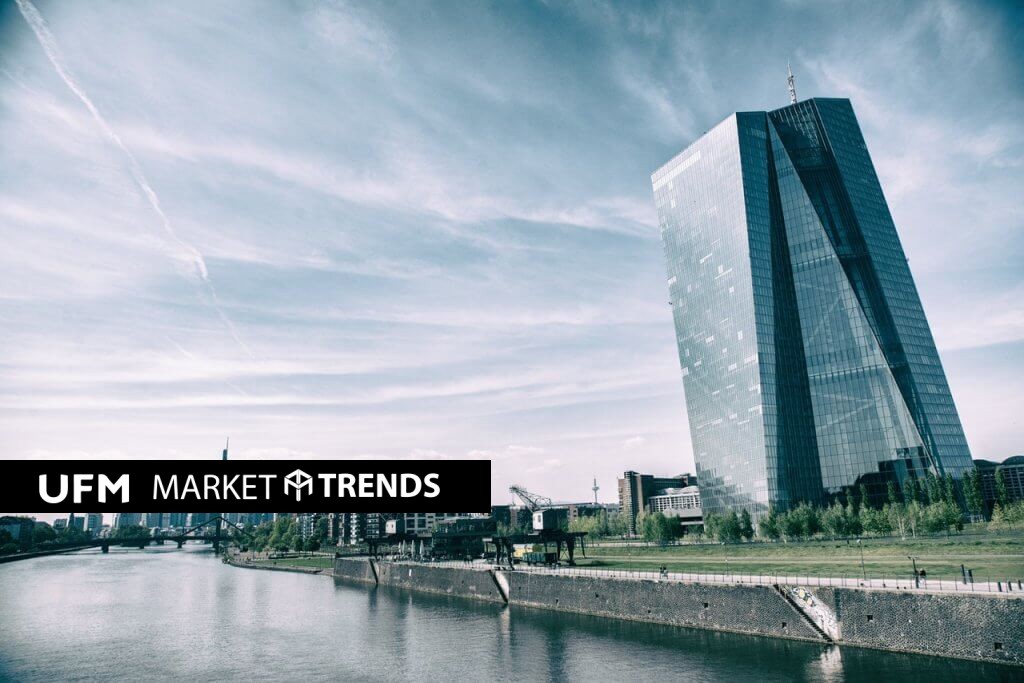 Central banks in most of the world are implementing expansionary monetary policies. The global economic slowdown that we at UFM Market Trends have been predicting for some time is now a reality. It remains to be seen whether this slowdown will turn into a recession. Our prediction is that recession is inevitable at this point.

The Fed is one of the central banks pursuing an expansionary monetary policy. Specifically, the Fed has begun to lower interest rates. The GDP growth figures indicate that the US has not yet suffered a slowdown and therefore a rate cut would not appear to be justified. Additionally, US inflation is very close to the Fed target, which also does not signal a need to lower interest rates. The only reason for this rate cut is that the Fed, like the European Central Bank and other central banks, is anticipating growth problems. When they expect growth problems, central banks cut interest rates ahead of time.

Finding itself in this situation, the European Central Bank decided on September 12, 2019, to launch a new stimulus package. We will look at what this package consists of, beginning with the lowering of the interest rate.

It is often said that, since 2008, the monetary transmission mechanism has severely deteriorated, at least in the developed world. Expansionary monetary policies and moves by the central bank, such as lowering interest rates or increasing banking-system reserves, have meant that the banking system was lending more (and creating more currency). Since 2008, the banking system hasn’t reacted to the “classic” expansionary policies of the central banks. Short-term interest rates are falling and the banking system is flooded with reserves, and still credit is barely increasing. The banks have two complaints:

As for the Eurozone, the first quantitative easing began in March 2015 and was initially going to last until September 2016. However, there is nothing that lasts longer than temporary public programs. The quantitative easing lasted until the end of 2018 (initially, it was thought that it would last nineteen months and forty-six months). During that time, the ECB bought almost 2.6 trillion euros’ worth of public and private bonds.

On September 12, 2019, only eight and a half months after the first quantitative easing had ended, the ECB launched a second round. This time, it announced that it will purchase 20 billion euros’ worth of bonds per month, significantly less than the previous round’s 60 billion euros per month (which at times went up to 80 billion euros). However, the first quantitative easing had a time limit, even if it extended much longer than predicted. This time, no future date has been set for when the purchases will cease.

Like all quantitative easing, this first measure seeks to “bridge” the banking system. The central bank will be the one to extend credit in the economy through the purchase of public and private bonds.

Permanent quantitative easing could have devastating effects in the medium or long term. The banking system is one of the main capital allocators in an economy. The ECB is assuming the capacity of giving capital and redirecting savings from some agents to others. In the worst-case scenario, the ECB could become a kind of public mega-bank that directs almost the majority of the eurozone’s savings flow.

The European Central Bank Could Lose Money with Private Bonds

Historically, central banks have been the most cautious investors. Central banks only intervened in markets by purchasing and selling assets that were considered very secure.[3] Since their inception, central banks have avoided risky assets so as to not endanger monetary stability. It has been very clear that a central bank’s losses tend to result in a loss of the currency’s purchasing power.

Since 2017, the ECB has had the capacity to buy public debt with a negative interest rate. With its new set of measures, it will also be able to purchase private debt with a negative interest rate. The ECB already risked losing money by purchasing public debt; now it will be able to lose money by purchasing private debt. In economic terms, the ECB will finance companies. Moreover, it will pay the companies to be able to finance them. The economic laziness of negative rates will now allow large companies to finance themselves and even charge for going into debt. The world is topsy-turvy.

This is the rate of interest that banks receive for voluntary deposits that they keep at the ECB (what are often termed excess reserves). This interest rate is currently negative, meaning that the banks have to   pay to keep money at the ECB.

These are actually two different interest rates, but they follow the same logic. Banks must pay these interest rates to the ECB to borrow money if they are illiquid but can still provide collateral that the ECB will keep if they default. These interest rates are at 0.25 percent and 0.0 percent, respectively, and haven’t changed. In other words, the banking system is receiving money from the ECB practically for free.

The idea is that the banking system will extend credit to convert some of its voluntary reserves into obligatory reserves. The problem is that, after quantitative easing began, the reserves surplus has been so large that the expansion of credit will be brutal, much more than what the banking system’s regulatory and supervisory mechanisms would consider acceptable. So the only justification for these negative interest rates is a desire to impose a tax on the banking sector, a tax the ECB collects to then transfer to the eurozone states.

Imposing this tax on the banking system has become a serious impediment to the system’s profitability and has not been very successful in increasing the amount of credit in the eurozone.

Therefore, it seems that the only objective of lowering interest rates is to influence the mistakes of the past. However, there is one last element to analyze: the introduction of a two-tier system in the deposit facility rate.

A Two-Tier System for the Deposit Facility Rate: The ECB Predicts Another Crisis Like Greece’s

The ECB has made a rather strange decision, one that, at least to my knowledge, is unprecedented. It is introducing a two-tier system for reserve remuneration.

In other words, the banking system will be penalized for all the reserves that fall under the exempt tier. It is possible that the ECB is realizing how much damage it has caused to the financial sector during these years with its policy of negative interest rates and is therefore reversing its policy.

However, the reader could ask: Why wouldn’t they raise the deposit facility rate to 0 percent? Isn’t that simpler than creating a system with various tiers? The devil, as always, is in the details.

When a bank deposits its reserves at the ECB, the bank becomes a creditor of the ECB. In our example, the ECB becomes the bank’s debtor. Up to this point, everything is simple. However, there are two entities at which every bank can deposit its excess reserves: the ECB and its own country’s national central bank (in Spain’s case, the Bank of Spain). In other words, there are two entities under what we know as the ECB:

The ECB and all the national central banks of the countries in the eurozone fall within the Eurosystem. In other words, the Eurosystem includes the ECB, not the reverse.

The main tier of the deposit facility, which has the negative interest rate, requires that the bank become a creditor of the ECB, not of the Eurosystem.

For its part, the tier that is exempt from the negative interest rate requires that the bank become a creditor of the Eurosystem, specifically of its own country’s national bank.

However, if economic problems do develop and a country threatens to leave or actually tries to leave the Eurozone, the story isn’t as simple anymore.

The first implies, in the current financial system, that the country’s financial system will not be able to meet its clients’ demands for euros if the ECB is not backing it.

The most vivid recent example is Greece’s experience in 2015. An exit from the eurozone would imply a bank run, bank closures, and almost certainly a redenomination of deposits in the new national currency.

The second point involves the national central bank’s separation from the Eurosystem with the assets and liabilities it has at that time. This is when the implementation of the two tiers of the deposit facility becomes relevant. In the event that a country wants to exit the eurozone, its national central bank’s balance will have to withstand the public’s demands for cash in euros (through its national financial sector).[6] This greatly limits the spread of financial risk from one country to another in the event that a politician in a eurozone country seeks to depart from the eurozone.

In other words, the ECB is shielding itself and the euro from potential political problems. Another crisis like the one in Greece in 2015 would cause far fewer problems for the euro if the ultimate euro debtor in a country’s banking system is its own central bank and not the ECB itself. The ECB thus drastically decreases the negotiating capacity of a country that wants to use its exit from the eurozone as a weapon to obtain a monetary bailout.

This last point can be interpreted both positively and negatively:

The ECB has resumed stimulus packages when the previous round has barely finished. Unlike the Fed, the ECB has never even tried tapering (to begin selling some of the assets that it purchased through quantitative easing). This time, the stimulus doesn’t have a predetermined end date.

Further, the ECB has announced that it could lose money by purchasing private assets. Negative interest rates will extend to the private sector of the economy. The Fed already tried quantitative easing with private assets, and the result was inconclusive at best. Never in the history of central banks has a central bank purchased assets with the intention of losing money. The ECB has doubled down on the senseless monetary policy of negative interest rates.

Finally, the ECB has established a two-tier system for excess liquidity holdings. The ultimate justification for this is to charge the eurozone member countries’ central banks for the liabilities in euros in their banking systems. In the event that a country exits the eurozone, its central bank, not the ECB, will be responsible for the euros owed to its financial sector. The ECB is protecting itself from unscrupulous politicians who use the potential destruction of the euro for blackmail. The downside is that the ECB is anticipating economic problems that are the main trigger of political demands for departures from the eurozone.

[1] This second point is an interesting case study in which various public agencies pursue different goals.

[4] In addition to other complementary measures.

[5] If national legislation does not prohibit it, the banking sector of a country that departs from the euro could continue offering accounts in euros. The problem is that neither the banking sector nor the national central national will have access to the liquidity facilities offered by the ECB. As a result, a crisis of liquidity (fleeing deposits and the conversion of monetary instruments into euros) could be fatal for the financial sector and the economy. However, the dollarization experiences in various countries demonstrate that the financial sector tends to concern itself mainly with its liquidity ratios when it does not have access to liquidity facilities of a central bank that issues its own currency.

[6] For the portion of deposits that are placed in the 0 percent tier, not the portion located in the tier with the negative interest rate, which will remain an ECB liability.