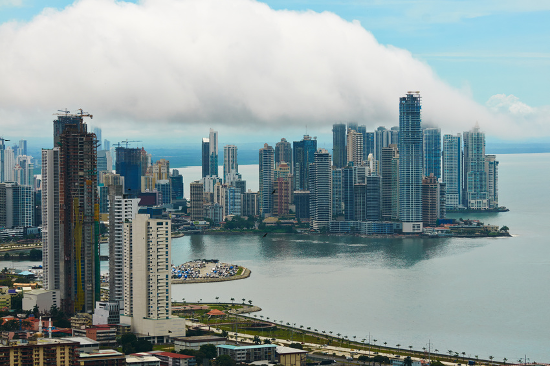 From a financial and political perspective, 2016 is turning out to be a year marked by worldwide uncertainty and volatility. The monetary polices implemented by the central banks of Japan, the Eurozone, and Sweden differ from those of Chile, Mexico, and the United States. The political landscape is also making headlines around the world: there is a growing trend supporting Europe’s extreme left and right with the result of the German referendum last week, the possible outcome of the US primaries, Jeremy Corbyn’s support from the United Kingdom, and France’s extreme right. This financial and political trend has spread to Latin America, with Brazil, Bolivia, Venezuela, and Panama standing out.

To analyze Latin America’s current situation, it is important to start with the geopolitical risks that have developed. Led by the corruption case against Petrobras and the current government, alongside an economic recession, Brazil faces a crisis that is reflected in the degradation of its bond risk profile by Moody’s and other credit rating agencies. On the other hand, the Argentinian government led by Mauricio Macri has been regaining confidence in international markets with news of a possible agreement with creditors and a possible debt emission. It is also important to mention the decisions the Venezuelan government has taken to deal with a severe crisis caused by its public spending and oil crisis.

Many reporters and analysts have focused on Argentina’s victorious exit from an uncertainty period in Latin America. However, they fail to analyze the overall region and the unintended consequences. Despite being favorably seen by some, in Argentina the opposition is largely rejected, signaling that the approval of debt restructuring is still far away. Besides, there is a part of society protesting against austerity measures. Macri said it was either “austerity or hyperinflation,” signaling the rejection of his decisions by some groups of Argentina’s population. It’s still too soon to claim victory for Argentina.

When analyzing the region in detail, Panama is found to be under scrutiny by international markets with high expectations. Panama is undergoing a political crisis: its former president is being investigated for corruption and several former cabinet members have been detained or while others are on the run. As shown in the following graph, Panama’s GDP is expected to grow but not as much as it did the previous year. 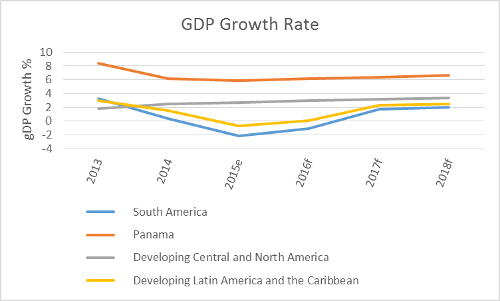 This is due to the strong investments made to expand the subway and for the canal’s new locks with capacity for post-Panamax ships. It is important to also note the Tocumen airport expansion and the real estate sector’s continuous growth during the last decade. Furthermore, trade liberalization with the Middle East makes Panama attractive to the service sector. Recently, Panama issued a debt of one million dollars, profiled by Moody’s with a BBB rating. Despite recommendations by the IMF, Panama increased public spending. The government heavily relies on the revenue generated by the Panama Canal, and it requires a lot of money for the infrastructure investments it is doing. However, bonds help close the deficit. It is important to mention that Panama is still seen by various international entities as a tax haven. Panama is carrying out structural reforms to change this perception, posing a risk to the service sector. These reforms affect and create an institutional change in the financial intermediaries that can affect this important sector.

As mentioned in a previous article, the geopolitical risks are crucial for this year’s decision-making process because of their reach and effects. Panama is exposed to an important geopolitical risk, but it does not seem to have been affected as much as other countries. This is not because it has a different corruption level than Brazil, Bolivia or Guatemala, or because it has institutional arrangements that generate more trust. Panama has been able to minimize the geopolitical effects because of how its economy is structured. It has a strong private sector that is leading the way with public-private partnerships in infrastructure projects and a real estate sector that is constantly growing, as well as diverse financial services that generate stability and trust. It is important to note how the flow of money generated by the canal, thanks to international trade, makes Panama stand out from the rest of Latin America. These factors have reduced the political risks, but the factor that makes a difference is Panama’s economic structure. Panama in an outlier in the current market conditions.