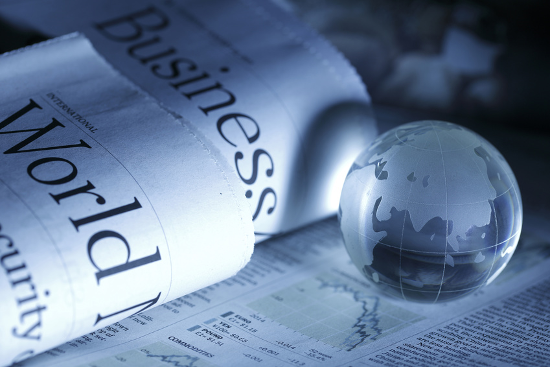 During the months of April and May, companies that list on the Stock Market publish their first quarter results. Bloomberg Gadfly published an interesting article by Simon Ballard about the compiled aggregate results of U.S. and European companies that managed to beat analyst estimates. In short, he emphasizes that over the course of the quarter analysts were lowering expectations on company returns due to market conditions. He states how important it is to note that companies are not experiencing enough growth in sales and gross profit margins are dropping due to the fact that cost-reduction is a strategy that works only for a short time. Nevertheless, the most interesting aspect of the article is that there exist two industries that did not manage to reach analyst estimates and experienced a sharp decline in earnings: oil and the banking industry.

Starting with the banking industry, we can see a clear trend in how the decisions made by central banks around the world are affecting yields for these institutions. The European Central Bank has once again decided to continue with negative interest rates and contribute to credit expansion where lowering of interest rates and increasing in borrowing are facilitated. At first look, this seems to be good for banks, because, with the expansion of credit, pumping money into the economy lowers the interest rates that banks charge on loans. As a result of these lower rates, an increase in loan applications is seen. Loans are given to companies and individuals that before did not have access to this credit. In theory, this increases the growth in revenue for a bank because of a larger quantity of loans, but they experience a lower profit margin as a result of charging lower interest rates. This is due to the fact that banks generate earnings from the spread that exists on short versus long-term interest rates.

This, however, is not occurring in Europe. If you take a look at our report on the Eurozone, we see neither an increase in lending to companies nor to governments; only an increase in credit extended to individuals. Consumer credit and credit to companies have different levels of profitability and this is made clear with the publication of quarterly results by the European banking industry. UBS, Commerzbank and HSBC have been affected by this as well as by the economic slowdown brought on by volatility in the markets.

When we take a look at banks in the U.S., we see a completely different story. The Fed implemented a rate hike in December, but revenues did not see the growth that analysts had expected. However, profits did rise. This is made evident with the publication of results by J.P. Moran, Bank of America, Citigroup, Morgan Stanley and Goldman Sachs, where it is shown that revenues did not increase but profits did, materialized in their earnings per share. 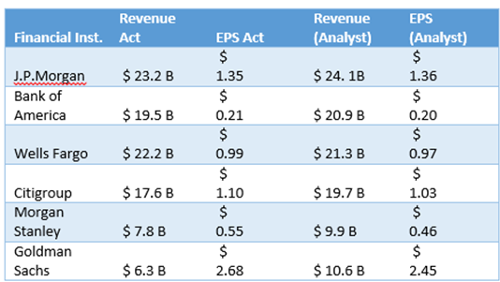 Stemming from good results as opposed to expectations, the prices of shares for banks in the U.S., as of April when they began to report results, have been on the rise. This can be seen in the KBW Bank Index (^BKX), which consists of the stocks of banking companies in the United States. 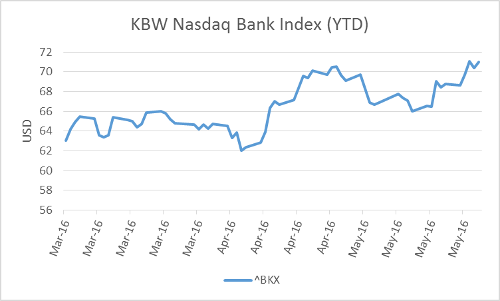 As a trend for banks in the United States, it comes as a good thing that the Fed is considering implementing three rate-hikes for this year. This again raises profits for banks, something that investors look for in a first scenario. Also, one of the presidential candidates in the United States announced that one of his decisions upon being elected would be to repeal the Dodd-Frank Act.  Although it is unlikely that this occurs because of the separation of powers, it conveyed more optimism to the banking industry in the United States. This very same day, along with the news from the meeting minutes from the Fed about possible increases in interest rates, the KBW Bank Index surged 3 points in a matter of an hour. The same thing happened with individual bank shares. J.P. Morgan, for example, experienced a 3.2% rise in its stock price putting it at its highest value during the 200-day moving average. The banking industry is confronting serious challenges this year in light of economic instability this quarter, but the U.S. banking industry will see better trends than that of European institutions as a result of monetary policies implemented by central banks.