Since 2007, the world has faced several years of economic uncertainty: there are doubts about the strength of financial systems; central banks are resorting to heterodox policies in greater numbers than ever before; there are sovereign debt crises; raw materials are in a downward cycle; and, last but not least, the emergence of populist political movements are shaking investors and small savers. For decades, Switzerland has been considered the perfect fortress for troubled times, not only because of its banking secrecy but also because of its strong currency, history of economic and financial stability, responsible public institutions, and a society that respects private property and legal security. Therefore, when things get tough and currencies become unstable, many economic agents try to maintain the purchasing power of their heritage by buying Swiss francs as reserves of value and deposit them in their banks.

For decades, Switzerland had been an exporter of net capital; in other words, domestic savings that were invested abroad exceeded foreign savings invested in the country. However, this changed after the current crisis: foreign capital began to enter and created internal tensions.

This article analyzes the economic and political effects of the purchase of Swiss francs: starting by the evolution of the dollar reserves held by the Swiss National Bank (SNB), then examining the effects of the SNB’s measures on the domestic economy and Swiss markets, and ending with the analysis of the general economic situation and Swiss public accounts. 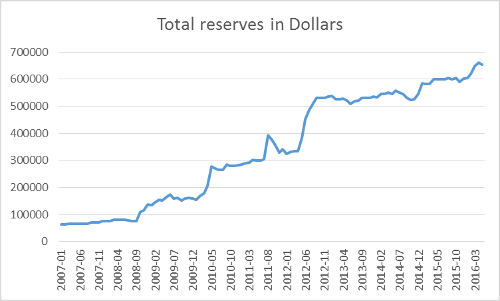 As the previous graph shows, the foreign exchange reserves in dollars have been increasing since 2007. The capital movement and foreign currency exchange by foreigners pressured the SNB to expand its monetary base. Swiss authorities had to intervene in the currency market, knowing that a strong appreciation of the franc would affect the country’s export sector—in 2007 it accounted for 54.4% of GDP.

The following graph shows the evolution of dollar reserves logarithmically in order to show the extent to which the Swiss franc is used as a reserve of value and a safe haven. 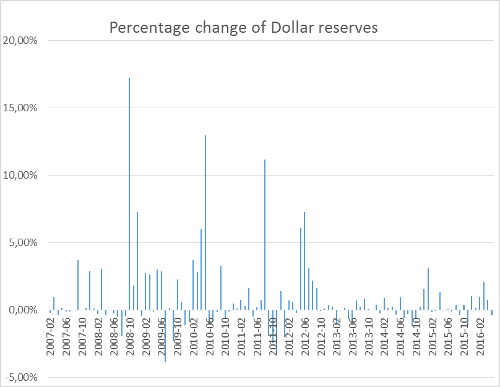 The graph shows that the SNB increased its reserves in periods of greater financial instability and uncertainty. Average dollar reserves rose by 0.80% a month—a considerable figure. Despite the efforts by Swiss authorities, the franc’s appreciation against the dollar could not be prevented, although the appreciation was cushioned. The following graph shows the evolution of the exchange rate USD / CHF:

Another measure taken by the SNB was to lower interest rates—it was among the first central banks to introduce negative interest rates. The SNB is trying to have interest rates lower than those set by the European Central Bank (ECB). All of the measures explained in the article have as an objective the discouragement of capital inflows and investment in Switzerland. The following graph shows the evolution of interest rates. 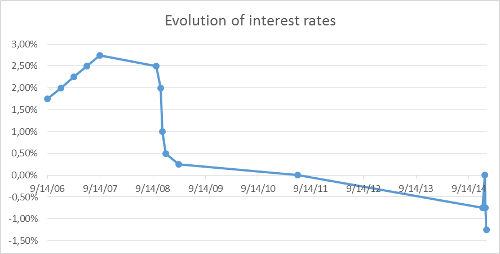 When it comes to analyzing of the previous effects on the domestic economy and Swiss markets, it is important to first examine whether the security offered by the country can translate into lower risk premiums and sovereign bonds with low profitability, and secondly, the equity market. The graph below shows how the profitability of sovereign bonds is very low or negative. At present only those bonds lasting 20 to 30 years offer positive returns, although lower than 0.5%. 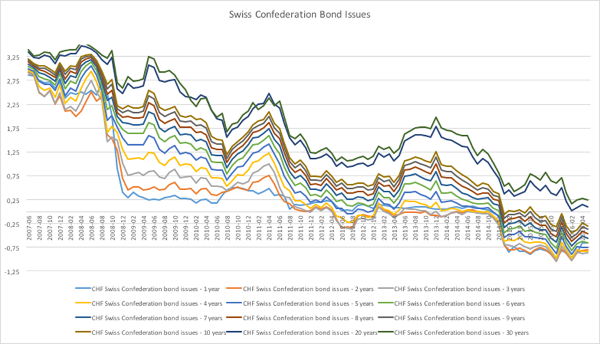 When it comes to the equity market, the Swiss Market Index (SMI) continues to trade 10% below the figure for 2007. Despite the economy’s strong growth since then, the multiples at which the shares are currently listed are lower from those of 2007. The next graph shows the historical price of the SMI: 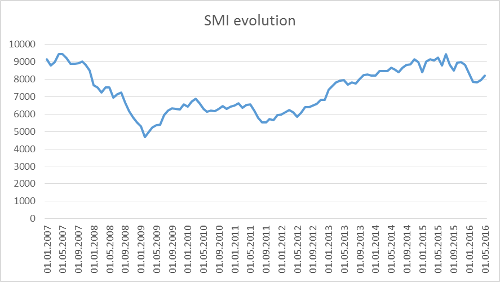 Therefore, there are negative returns on public fixed income and stock prices that have not yet recovered their historical maximum. Which market has been affected by the non-conventional measures of Swiss authorities? Real estate. Low interest rates, the very low or negative returns on federal bonds, and the uncertainty surrounding variable income are estimated to have motivated investments in real estate assets, which in turn have been driven by the great number of immigrants in search of employment. Below are a series of graphs demonstrating this, starting with the evolution of mortgage debts. 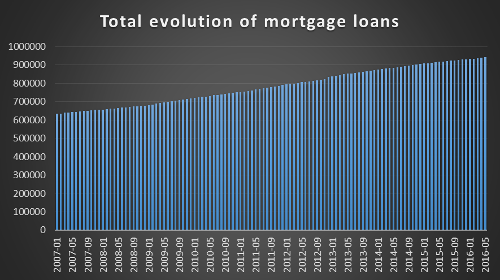 As the previous graph shows, total mortgage debts have increased to a monthly average of 0.15% since 2007—a possible indication of a real estate bubble. The following graph represents the evolution of housing prices.

In examining housing prices, the possibility of a real estate bubble seems clear. Another indicator that points to a bubble is the index prepared by the Swiss bank UBS. According to this index, currently there is a zone of high risk, close to a bubble zone. UBS estimates that the Swiss real estate market is in the same situation it found itself in from 1989 to 1990, where there was a bubble and a consequent crisis. Finally, the percentage of empty houses, both for sale and for rent, has to be analyzed. From 2009 up to now, empty houses have almost doubled; the following graph shows the percentage of empty houses. The trend is clear: large volumes of immigration have not been able to absorb surplus housing that is for rent and sale. Therefore, if there is a real estate bubble, its possible burst and consequences will have to be analyzed in the future.

Finally, in the analysis of Switzerland’s general economic situation and public accounts, it seems that a country in which the central bank clearly intervenes in the market could have a government that pursues similar policies and must be going through a severe crisis to justify such interventions. Yet this is far from the reality. Below are a series of graphs that show how the Swiss economy has behaved during the crisis and the behavior of is public institutions. The following graph shows the evolution of GDP from 2007 to 2015. 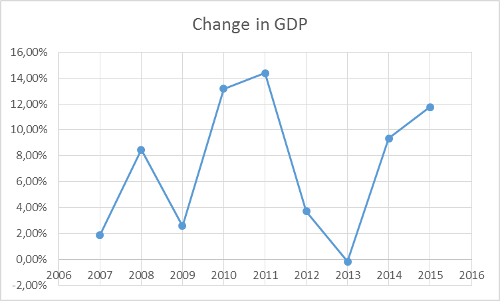 As the graph shows, Switzerland did not have a crisis when the rest of western world crumbled from 2007 to 2008. The country only had a negative growth of -0.19% in 2013. From 2010 to 2011, when the survival of the European Union was in question, Switzerland grew at a rate 13% and 14%. It is clear that Switzerland is flexible enough to adapt to anything, even when its neighbors and business partners are going through one of the worst economic crises in history.

The following graphs depicts the behavior of Switzerland’s public institutions: 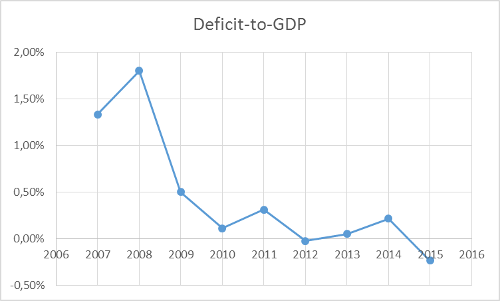 When it comes to the evolution of public debt, the previous image shows how Switzerland has carried out a policy of stability of its public accounts. The deficit has never bulged and has gone from 1.80% in 2008 to a surplus of 0.23% in 2015. This policy of genuine austerity translates into controlled public debt, as shown below. 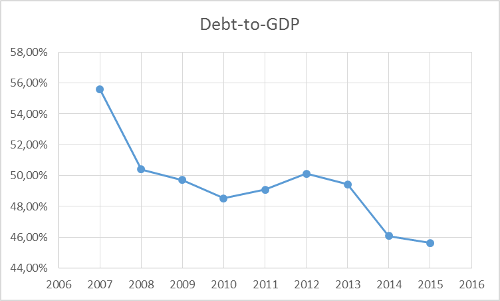 Therefore, there are state public accounts, a public debt that is decreasing as a percentage of GDP, an economy that is strongly growing, and full employment. Why does SNB put so much effort in expanding its balance and intervening in the markets? Precisely to protect its source of growth: the trade balance. Exports account for 50% of Swiss GDP, a figure that shows how the external sector is the country’s greatest strength and at the same time its greatest weakness. The graph below shows why Switzerland, despite its surroundings, has been able to dodge the crisis and grow strongly. 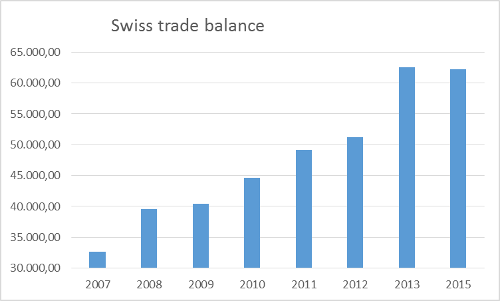 Since 2007, the Swiss trade surplus has doubled. Swiss companies are extremely productive and provide a great added value, but no one can doubt that this trade balance is subsidized by the central bank.

Several conclusions can be drawn from this analysis, including the following ones. In situations of uncertainty, Switzerland and its currency are used as a refuge. Swiss authorities will have problems trying to keep their currency stable, without appreciations; this will imply an increase in the monetary base, an accumulation of foreign currency, and a drastic drop in the interest rate. These measures have resulted in increases on the price of federal bonds (low yield) and a housing bubble. It may seem that the Swiss equity has not been affected, but it is important to note that in the world only the US market has been able to beat historical highs and the SMI is only trading 10% below its maximum—the Spanish IBEX 35, for example, is 50% below. The situation is still evolving but the expectations are not good: the side effects of negative interest rates and an extreme expansion of the central bank are still unknown. It is also uncertain how long it will be possible to maintain a positive trade balance, and how an economy could suffer if the currency is appreciated and when 50% of its GDP are exports. It is clear that central banks cannot control the market as much as they would like; in the end the market adjust itself, however, this adjustment can be very painful.

Edgar Fernandez Vidal is a graduate in Economics and has a master´s degree in management from IE University, where he graduated with Honors, as top student in his Class.

Edgar is also an Associate Professor, teaching Investment Strategies and Valuation, at the ISBIF in Madrid. He is also speaker in economic conferences and at international research centers such as the Austrian Economic Center.