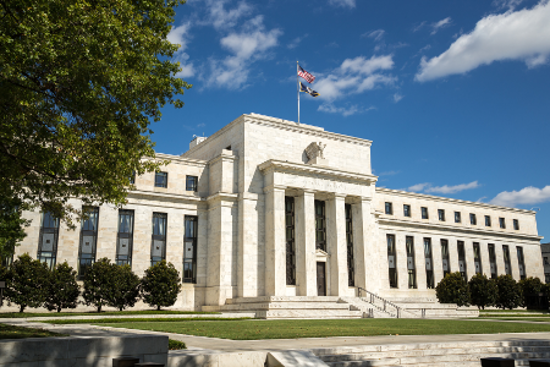 I have said it many times over and I will repeat it here: the last time around, it took Fed-chairman Alan Greenspan over two years and seventeen rate hikes to bring the Fed funds rate from a then all-time-low of 1% to 5.25%, before the U.S. economy suffered the worst recession since the 1930s. We are not so lucky this time.

Greenspan’s rate hikes didn’t affect delinquency rates straight away. Credit stress was subdued until a year after Greenspan’s last hike. Only in the first quarter of 2007, delinquency rates began to move higher. The reason is as clear as the water surrounding the Bahamas: in the years preceding the Great Recession credit growth was mainly focused on the U.S. housing market.

Credit growth was mostly driven by mortgage lending. Mortgages were generously provided by banks, but increasingly to subprime borrowers (subprime referring to their poor credit). Yet these subprime borrowers didn’t pay higher interest rates on their mortgages the moment Alan Greenspan began hiking rates. But as soon as their (promotional) teaser rates resetted, they started “feeling the Alan.” Delinquency rates went through the roof and the U.S. economy into recession.

Teaser rates, the low initial interest rate a borrower pays for the first few years, were responsible for the lag between Greenspan’s rate hikes and the 2008 recession.

Today, the Federal Reserve is ignoring a very inconvenient truth: the global economy is much more fragile than the last time around. And we have no teaser rates in today’s subprime credit (unless we of course consider oil producers that hedged oil prices by buying futures as something akin to “teaser rates”).

This time around, we will certainly not need seventeen rate hikes or three years before pushing the economy into recession.

In fact, we now know what happened after Janet Yellen increased the Fed funds rate with a mere quarter-percentage point: the delinquency rate on commercial and industrial loans increased 50%. That is right. In a single quarter delinquency rates in the U.S. banking sector exploded from 1% to 1.5%. The cycle has turned.

This Is Why Nobody Is Paying Attention

Why is nobody paying attention to this seemingly undeniable shift in the credit cycle? Why does the Federal Open Market Committee (FOMC) not even mention it? Why are the alarm bells not ringing in both Fed board rooms and the financial press?

The only answer to these questions is that the Fed is committing a capital sin. The headline number, the delinquency rate on all loans, decreased in the first quarter of 2016 from 2.20% to 2.17%. That ignores, however, the underlying pressures building up inside banks’ balance sheets. Fed-officials seem to focus on the headline number, while ignoring the deteriorating fundamentals.

With rising home prices, a vibrant housing market, increasing employment and interest rates at the lowest levels in world history, defaults on mortgage and credit card debt are reaching all-time lows. Yet delinquency on mortgages and credit cards tend to lag the business cycle. Typically, they only rise when we already are in recession, just as unemployment tends to be a lagging indicator. 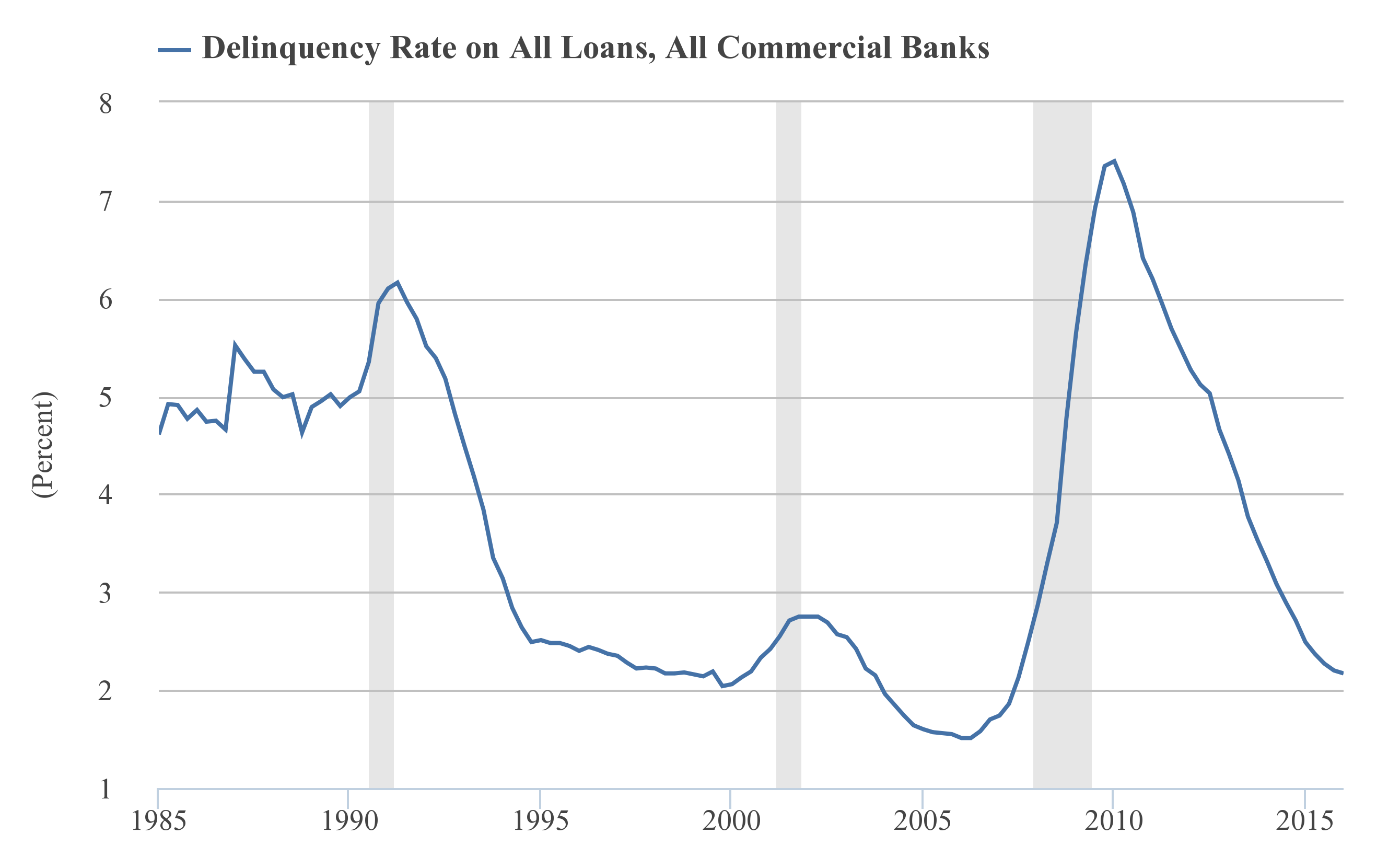 Even if we are on the verge of a new banking crisis, the headline number will never tell us so.

Which Loans Are Increasingly Overdue?

If delinquency rates on consumer credit (mortgages and credit card debt) will not help us in estimating how probable a new banking crisis is, then which delinquency rates do matter? And why did I call them “shocking”?

Let’s first break down a bank portfolio. Bank loans can we divided into three groups:

Banks lend money to consumers for buying homes (mortgages) or consumer goods (credit card debt). We concluded that delinquency rates on those loans tend to lag the business cycle.

Loans to businesses, in whatever form or shape they come. Most of these loans are pegged to an interest rate benchmark, for instance the LIBOR. After the Fed’s first rate hike in December, the U.S. dollar 12-month LIBOR went up from approximately 0.8% to 1.3%. Marginal borrowers are slowly getting pushed into bankruptcy.

December’s rate hike clearly resulted in a change of tides: delinquency rates have bottomed and are on their way up. And do not forget the following: the fact that delinquency rates no longer decrease but began to increase, has always been a clear warning signal for a recession — at least during the past twenty years. And over that same period, this indicator never gave a “false positive,” in contrast to many other (recession) indicators. 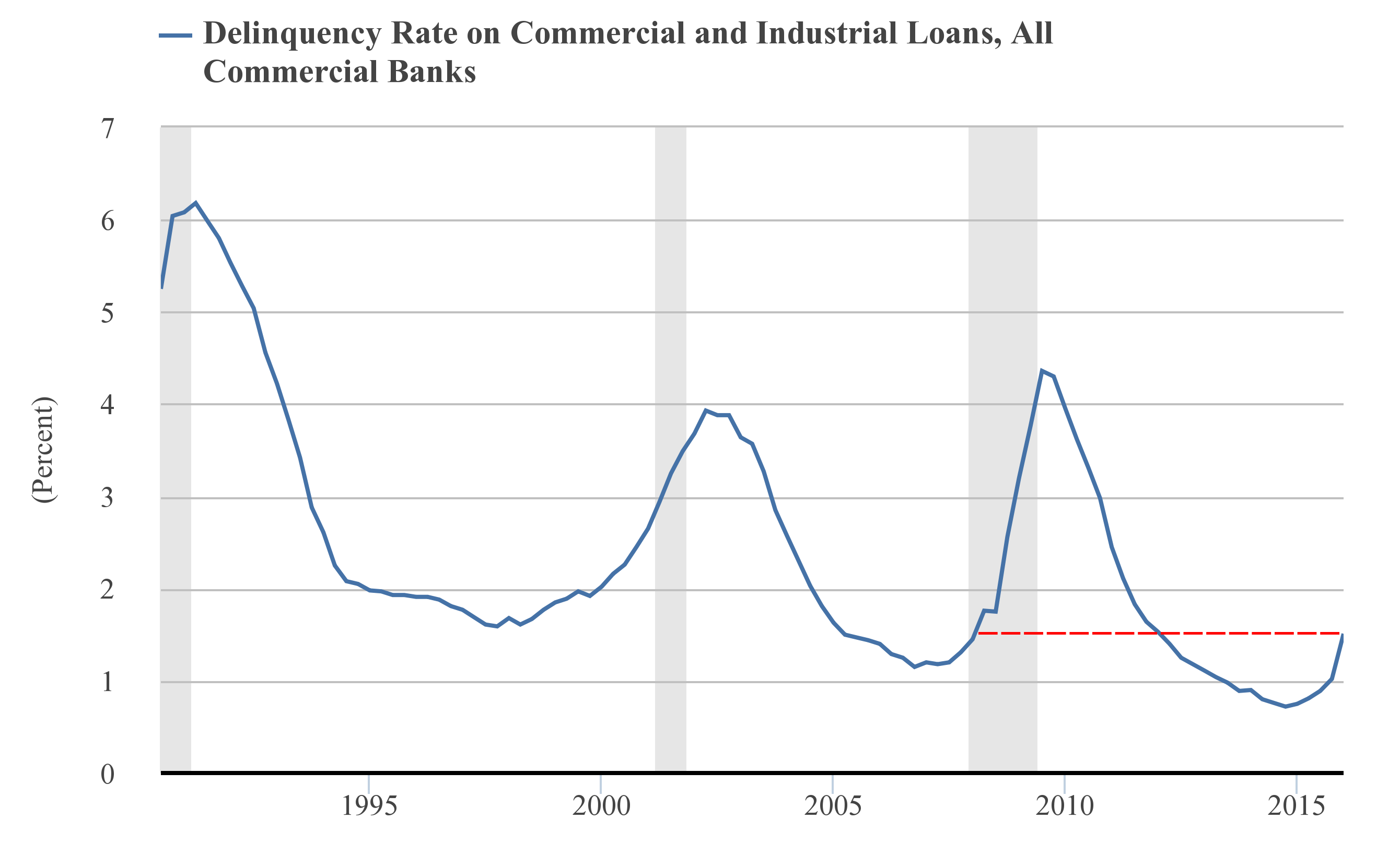 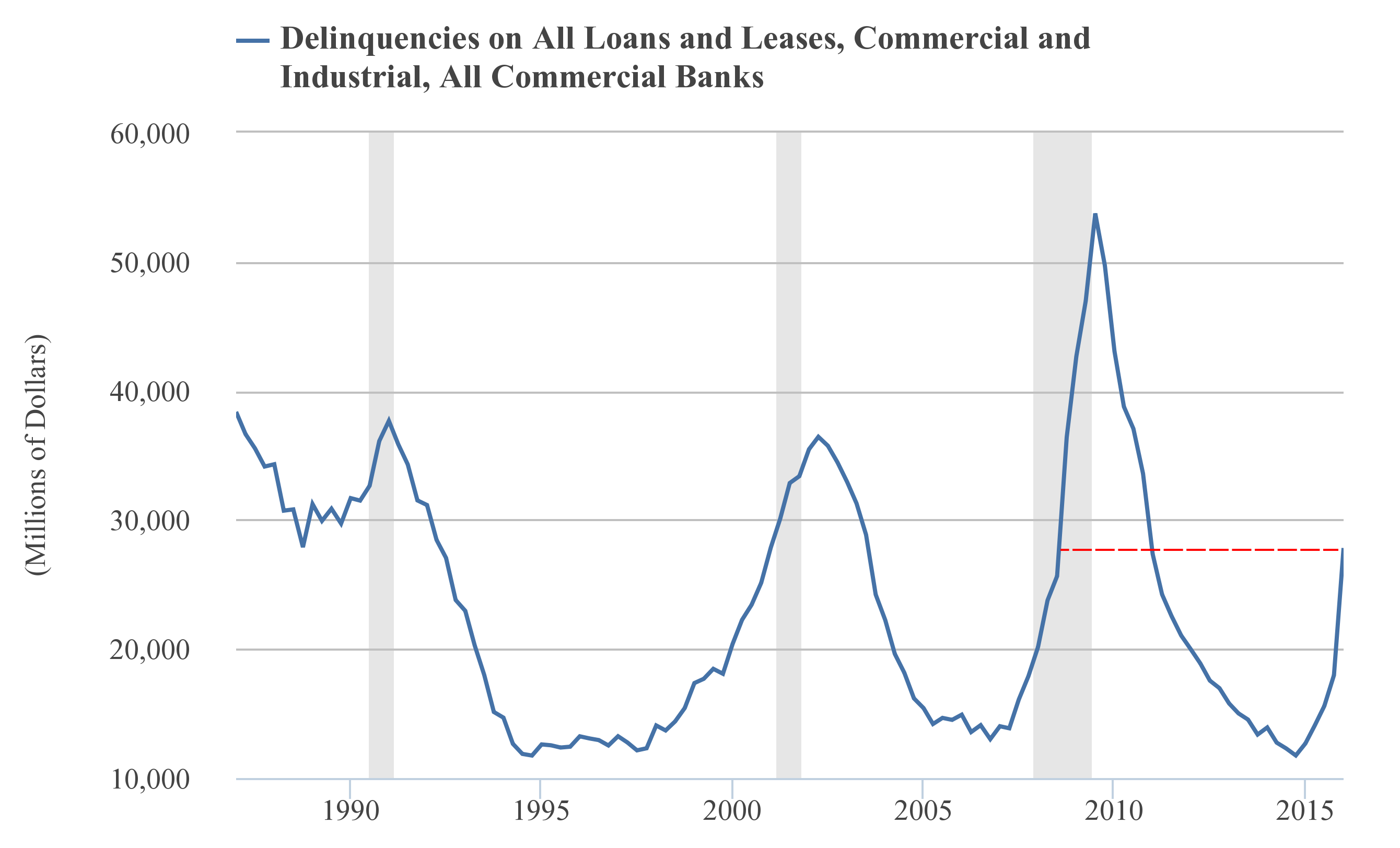 In dollar terms the shift is even more pronounced. This is of course the result of our staggering debt levels, which are not apparent in the relative numbers. Source: St Louis Fed 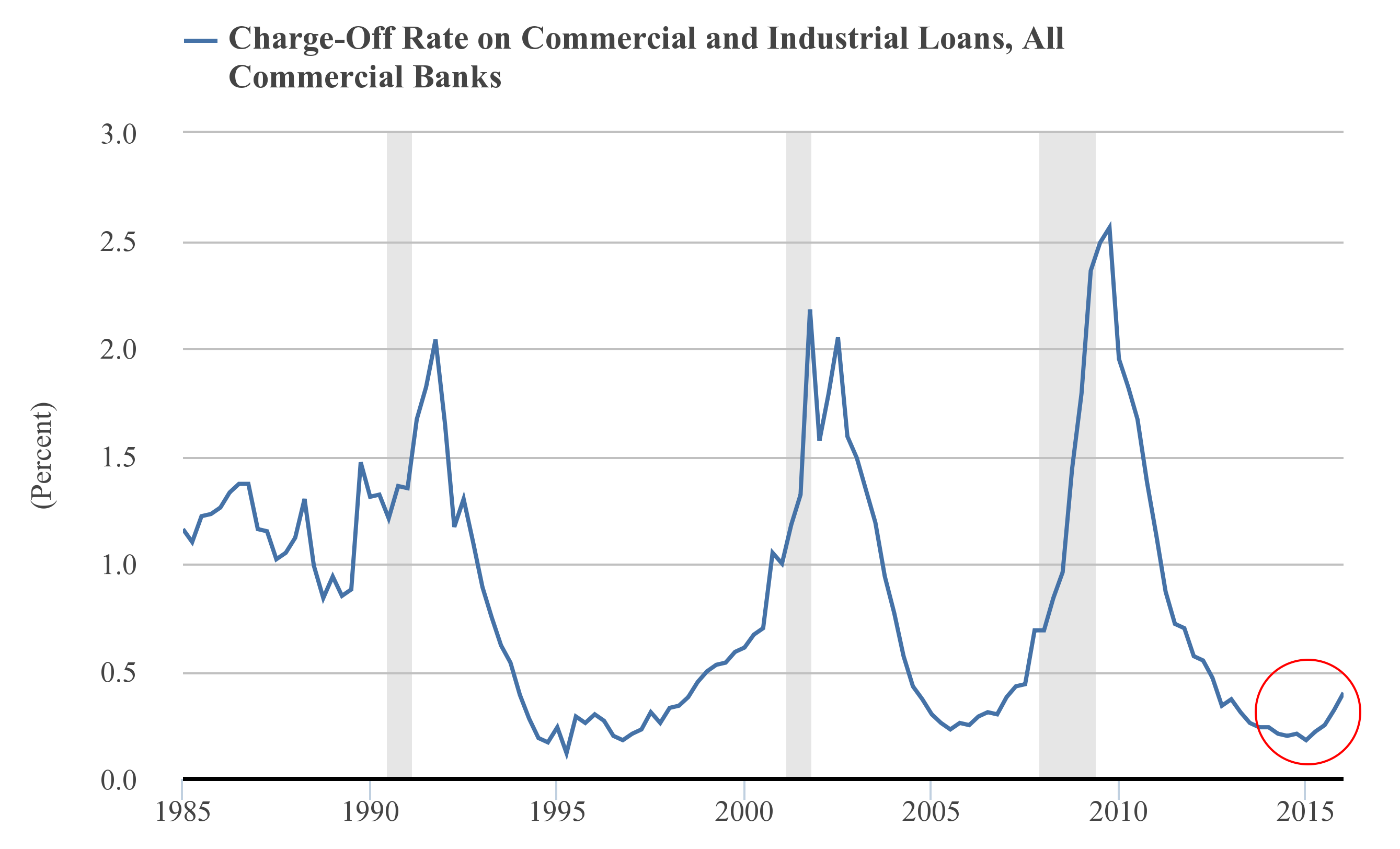 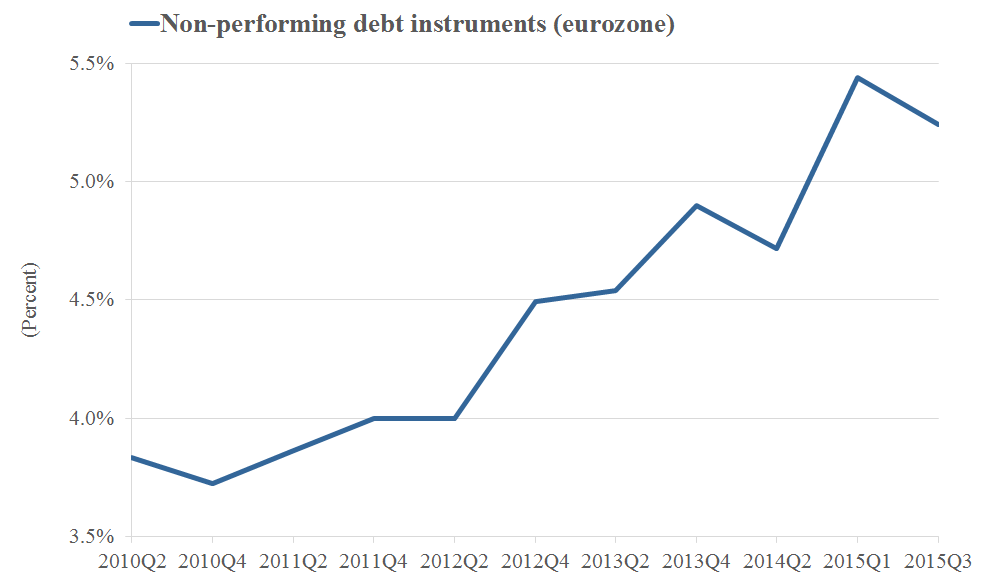 The delinquency rate on bank loans in Europe is also on the rise; here too, at least in the periphery countries, it appears the credit cycle has turned. Source: European Central Bank (CBD2, ‘gross non-performing debt instruments’)

Keep a Close Eye on Delinquency

What is next? We will have to wait and see to find out what delinquency rates have done in the second quarter. However, it is clear that the tide has turned. It is irrelevant whether the Federal Reserve will hike rates in July or September. Consensus currently says we should expect two more rate hikes this year. If that is true, we can expect delinquency rates to move up further in the coming quarters.

In 2006 it was exactly twelve months after delinquency rates bottomed that the recession began. If the same period applies, we are due for a recession. In the first quarter of the Great Recession in 2008, delinquency rates were only 1.45%. We are already above that level. On the flipside, however, we should not ignore that it took three years of rising delinquency rates before the economy entered into recession in 2001. Credit cycles are not an exact science. Yet the trend is clear and Fed chair Janet Yellen should be terrified about this disturbing development.

The fact that increasing loan delinquency coincides with mountains of debt maturing in 2016 and 2017 is a topic for next time.