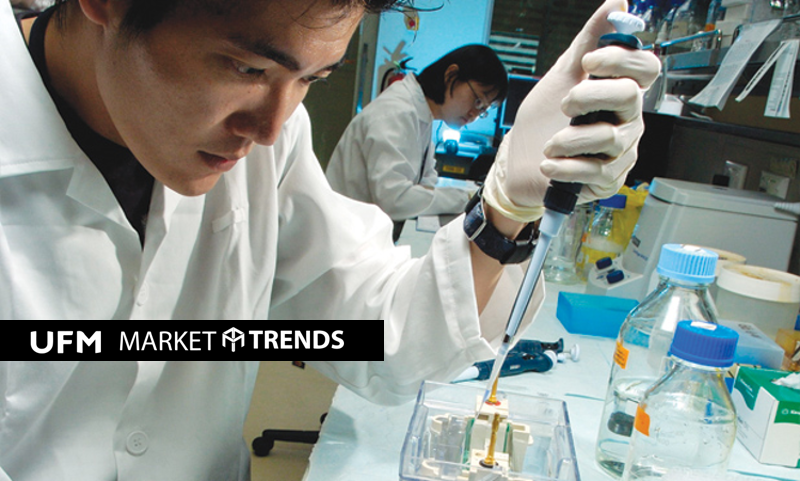 Investment in research and development (R&D) is not synonymous with profitability. It is also evident that R&D does not guarantee a high stock market capitalization for a company. However, the promise of a greater market share, high growth rates, and a large revaluation of production goods in the long term means that companies do not assess the appropriate level of R&D according to a realistic marginal analysis of their productive factors.

Why Invest in R&D?

Expenditures on R&D reflect the search for attractive returns through innovation in the production of consumer goods. Pharmaceutical and technology companies tend to invest large sums on R&D, although universities, research institutes, and governments do so as well. In economic booms, companies that previously invested in R&D tend to obtain extraordinary benefits—more than companies that did not do so when the demand for their consumer goods was lower.

This pattern is evident in companies that have inelastic demand for their goods and services (such as Apple) or companies that tend to have enthusiastic leadership policies and experience economic growth in sectors with large positive externalities (such as technology). These positive externalities have made Beijing venture to assert that China will be the world leader in AI technology by 2030 and have made China’s software companies, such as Alibaba, invest $15 billion over three years in R&D laboratories.

China seems to be the new enthusiast of this kind of investment. Some examples are the Sunway TaihuLight supercomputer by the National Supercomputing Center of China or the manned drone Ehang 184 by the company based in Guangzhou.

The Leaders in R&D Investment

Figure 1 shows that the leader in R&D expenditures is Israel: the country spends 4.3 percent of its gross domestic product on research and development. Israel is followed by South Korea with 4.2 percent. South Korea, an OECD country, has experienced high R&D growth because of huge investments in information and communication technology. The following graph includes funds raised abroad and excludes those that are raised internally for productive purposes in other countries. 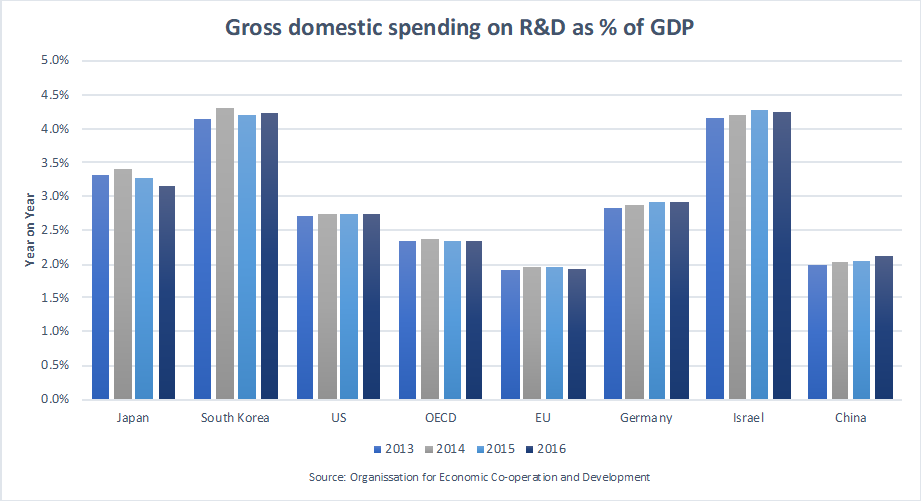 Another country that spends a remarkable amount of money on R&D is Japan. However, the United States and China spend more in inflation-adjusted dollar terms (figure 2). However, of the federal spending, the 2016 R&D level was the lowest in the United States since 1956. 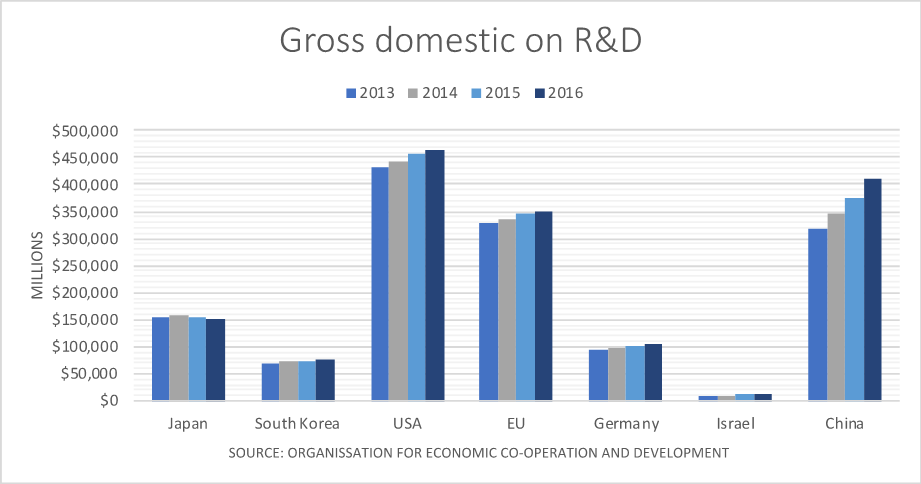 China vs. the United States

The Chinese economy has always tried to stabilize the large amount of goods it imports, in addition to establishing something like a fixed parity rate with the dollar. We say “something like” because “dirty floating” parity between a local currency and a reference currency (as in China) is no more than a regular version of a rentier model based on a central bank with a large stock of the reference currency. Citizens have incentives to acquire as many dollars as they wish thanks to the fixing of the exchange rate. This is only possible because of the large amount of exports. China is in fact the largest exporter in the world: computers, broadcasting equipment, and integrated circuits make up the majority of goods that the Asian giant exports, mainly to the US, Hong Kong, Japan, and other countries.

Since the Chinese ended the fixed parity with the dollar in 2005, its investment in R&D has doubled, particularly between 2008 and 2012 in the sectors mentioned above, such as technology and pharmaceuticals. As stated in our latest report on the Chinese economy, there is evidence of a structural shift from the manufacturing sector to the service sector in the last two years. 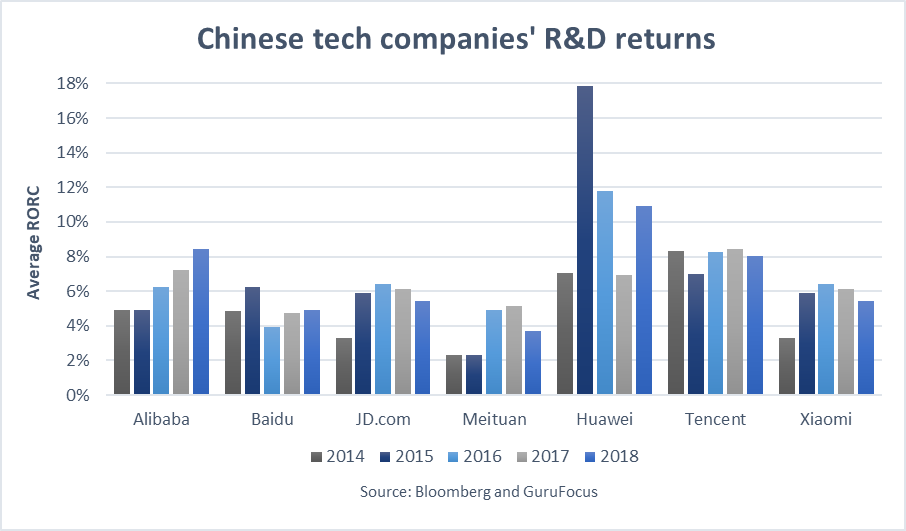 Source: Made with data from Bloomberg and GuruFocus

Investors need to evaluate the productivity of every dollar invested in R&D. One measurement is the return on research capital (RORC). This financial metric is a component of the general level of productivity and growth of a company, since research and development are one of the means by which firms produce new goods and services and increase the quality of productive factors. The technology industry usually relies on this measure to calculate the productive efficiency of this expense.

RORC measures the proportion of gross profits in a given period generated by the R&D expenditure of a previous period. However, the murkiness of the financial statements of Chinese companies is still a pending account, including actual spending figures. Figures 3 and 4 compare the RORC of American and Chinese companies. In the absence of more precise data, the return of this sector is both a measure of R&D and a proxy for how aggressive are the public policies that generate this spending through generous fiscal incentives and the expansion of the specialized workforce (in science, technology, engineering, and mathematics).

Because of our lack of confidence in the financial statements of Chinese companies, it is very likely that the growth of this metric only reflects a mere fiscal issue. However, in the period studied, every time there was an increase in R&D, there was fiscal flexibility in the previous period (tax cuts in a certain sector, such as technology) or there was a reduction of tariffs on the capital goods necessary for these companies’ production. 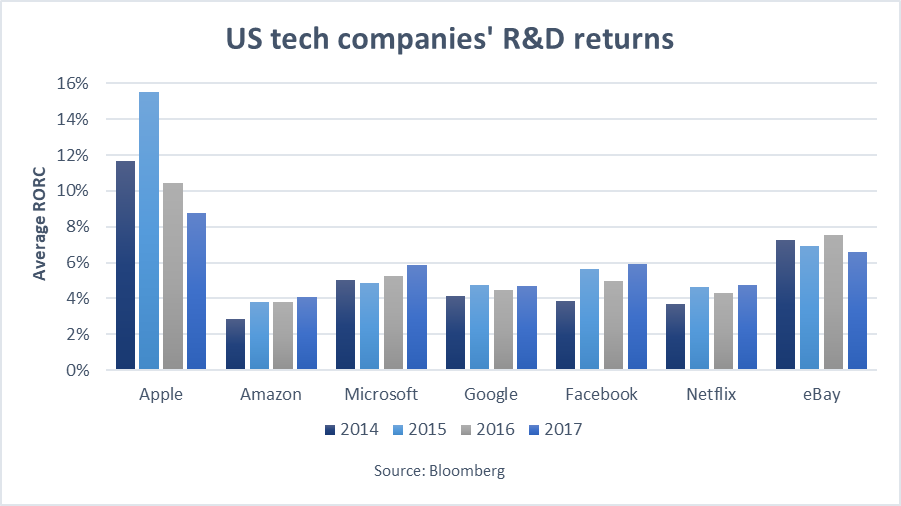 Except for Apple, and to a lesser extent eBay, American companies are investing a much smaller portion of their sales in R&D in the risky early phases of the production structure compared to the late phases. Furthermore, the total volume of investment has fallen in the United States. This contrasts with the rapid growth of Chinese companies, which have increased their investment since the end of 2014 and whose RORC has surpassed that of the US. 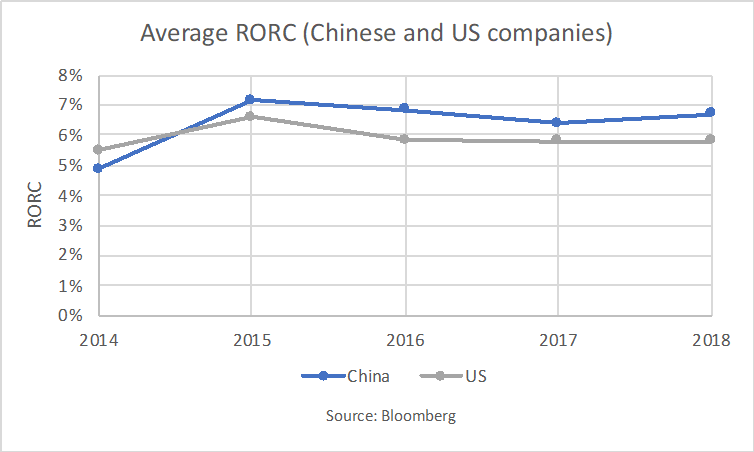 The rotation of capital, however, is not synonymous with the concept of phases of production. We need to continue to observe closely the trend in order to know how productive and efficient the large investment of Chinese companies in R&D has been and how sensitive to the fluctuation of the interest rates is the value of the massive projects of Alibaba, Huawei, and other Chinese corporations.

Diego Santizo is an analyst at UFM Market Trends. He has a master’s degree in Economics and a Minor in Finance from Francisco Marroquín University. He is an assistant professor of Economics and related courses at UFM. He is deeply committed with learning, teaching and researching. He is also a multilingual translator.