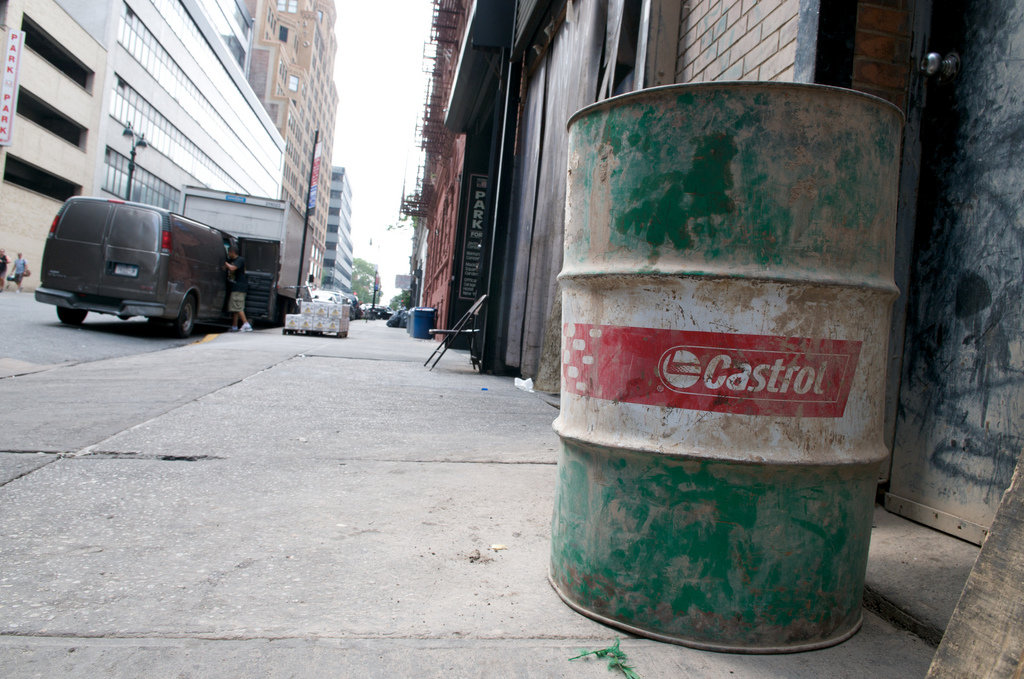 The large traditional oil-producing countries — both OPEC and non-OPEC — are still catching up with the new reality. After deciding to extend the production cuts — agreed upon half a year ago — for another nine months, oil prices plunged below $50/barrel. Not quite the effect these oil giants were hoping for, but nothing out of the ordinary. After all, the fact is that supply and demand dynamics in the oil market have changed for good, something you can read in more detail in UFM Market Trends’ latest report on crude oil.

What happened after the first production cut that began in January this year?

The OPEC countries – and a few non-OPEC countries such as Russia – agreed late November 2016 to lower oil output by 1.3 million barrels a day (b/d), from 33.8 million b/d to 32.5 million b/d. Oil prices went from approximately $45/barrel to over $50/barrel. Suddenly, marginal US shale oil became profitable to extract. This is how US shale producers reacted to the OPEC supply cut: 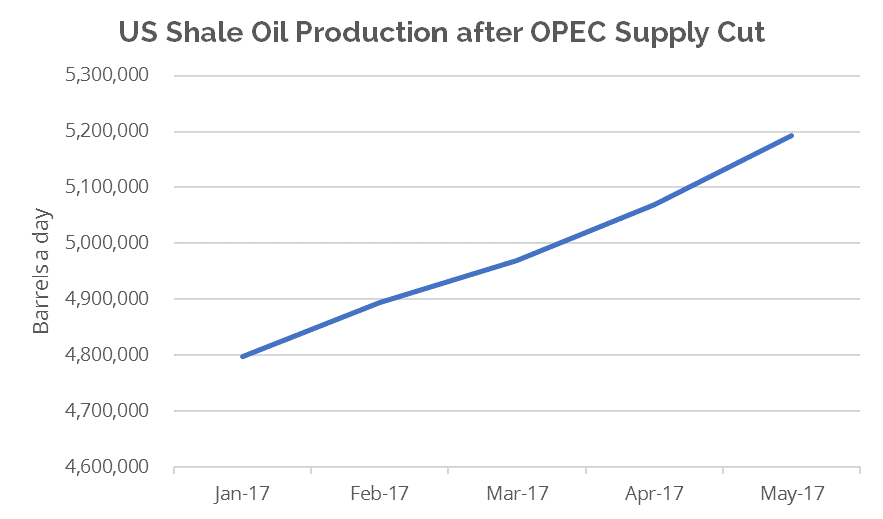 Instead of limiting total oil supply, small US shale oil producers stepped in and made up for the supply cuts. As future crude oil prices began moving upward directly after OPEC announced the agreement, US shale producers locked in higher prices in the futures market and began producing.

Markets noticed that OPEC supply cuts – despite high compliance – only incentivized US shale production. Oil prices declined again, back below $50/barrel in March 2017, only to recover in April on renewed speculation on further (deeper) OPEC supply cuts.

It took a bold statement by Khalid Al-Falih, Saudi Arabia’s energy minister, that they would “do what it takes” to push oil prices back up above $50/barrel, reminiscent to Mario Draghi’s “whatever it takes” to prop up European sovereign bonds in mid-2012.

Yet, today, Khalid Al-Falih´s statement lacks credibility. In the past, OPEC supply cuts appear to have some impact on oil prices (some impact, as one of our analysts, Edgar Ortiz, showed that OPEC as a cartel is inherently instable due to an incentive problem): 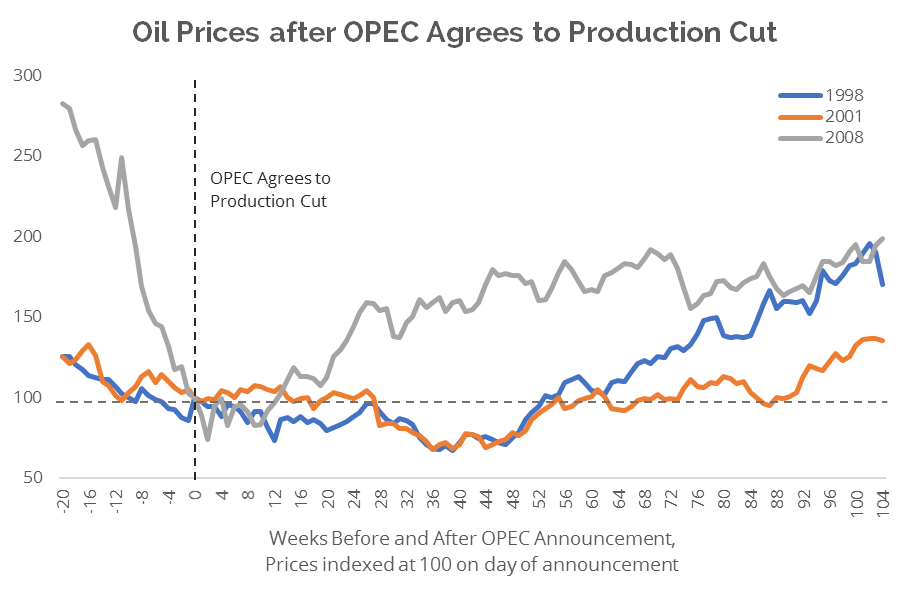 In the above chart, we can observe what happened with crude oil prices after production cuts in 1998, 2001 and 2008. Oil prices rallied, especially a year after the day of announcement. This could be explained by the fact that supply cuts are generally agreed upon on a certain date, but only gradually implemented. As markets tend to be skeptical about full compliance by all OPEC members, the gradually implemented cuts are also gradually priced in. Note that the above historical supply cuts match more or less the 2017 supply cuts when it comes to size: in 2001, for example, OPEC agreed to cut supply by 1 million barrels a day. In short, above data can be said to back the conclusion that OPEC supply cut announcements were, to a certain degree, able to push up oil prices in the past.

Yet things have changed. The idea that, this time around, OPEC supply cuts will have any long-term impact on oil prices is plain wrong (unless Saudi-Arabia completely halts production, which is unlikely given the dependence of the country’s public finances on oil revenues): shale oil has revolutionized the oil industry and traditional producers, including OPEC countries, must face the new reality. 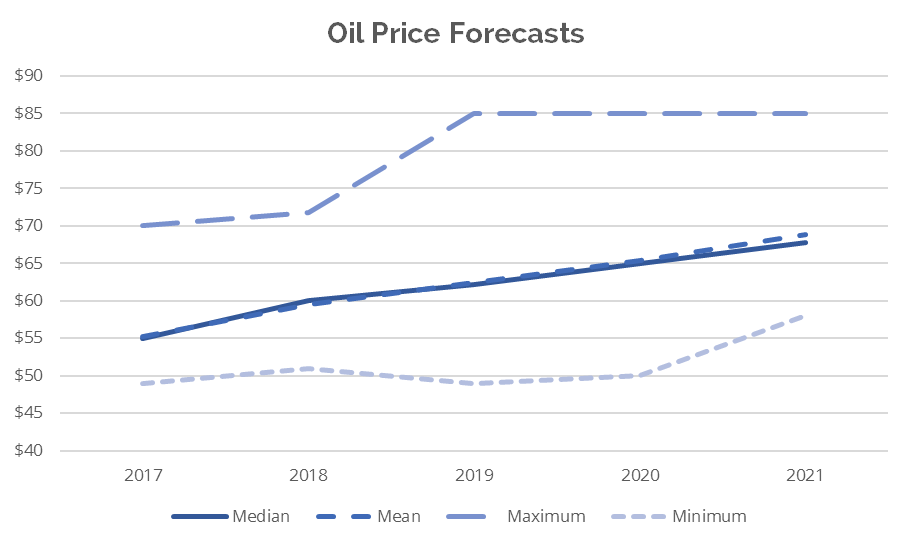 Oil analysts at major banks still predict oil prices to end the year at $55/barrel or even at $70/barrel. Moreover, they expect absolutely no future downside to oil prices. However, the odds that oil prices will end the year above $50/barrel are slim. And increasing US shale production is, besides an economic slump in China and the US, the main culprit. Some analysts are already catching up to the new reality and are slashing their oil price forecasts.

The only – temporal – thing that could rescue the oil giants is a severe tightening in financial conditions in the US. As US shale producers are highly dependent on leverage, largely provided by the corporate bond market or banks, a rise in borrowing costs affects the break-even cost of a barrel of non-conventional shale oil much more than a barrel of conventional oil. As you can read in our latest report on crude oil, debt servicing payments of US energy companies already topped 70% of operating cash flows at the end of 2016. With a further tightening in financial conditions, OPEC oil supply cuts might actually have an impact and the price of oil would, all other things equal, move substantially higher.

Yet that would only serve to delay the pain. In the end, shale oil production is radically changing the oil industry. Curiously, in ten years from now, it will be both the US and Russia that will be the major shale oil producing countries. We can only guess how that will play out in the (geo)political arena.

Read more about how the supply and demand fundamentals in the crude oil market have changed in recent years in our latest CRUDE OIL H1 2017 REPORT published by UFM Market Trends.