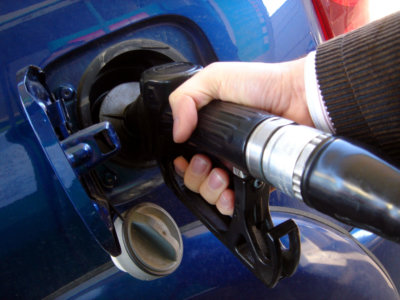 Many analysts are venturing to link the crisis that plagues the Venezuelan economy with the fall in the price of crude oil. With oil being one of the most important commodity in Venezuelan production and the country’s main export product, it seems that the fall in the price would bring any country with an economic structure similar to Venezuela’s into a crisis. Similarly, many assume that the problems in Ecuador have the same root as those in Venezuela, although less pronounced.

Certainly, one of the markets that has seen the most movement lately is oil. The price of an oil barrel today is 50% less than what it was in mid-2014. The price increased 47% in 2016. 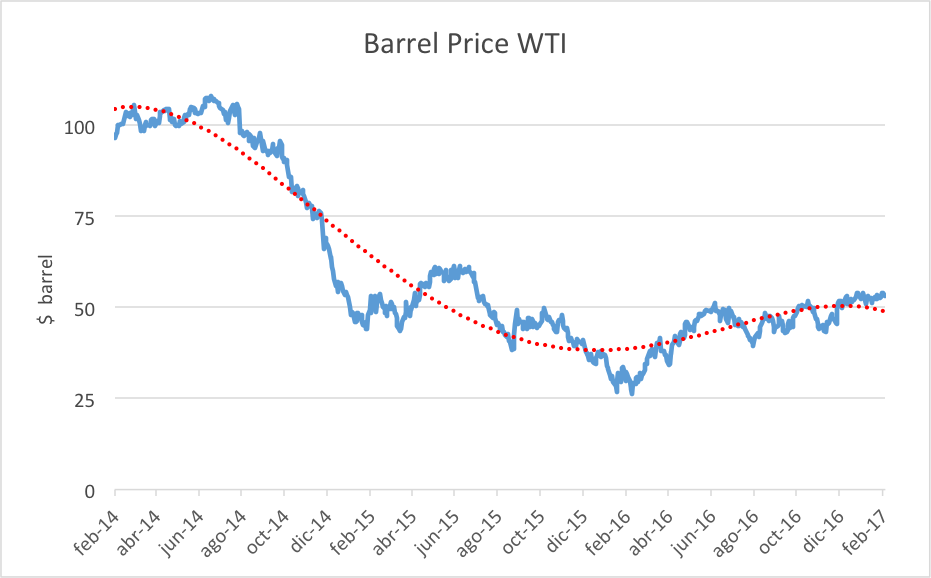 We intend to analyze how the fall of oil prices affected its major exporters, among them Venezuela.

From the viewpoint of exporting importance, it seems that there are many countries with net oil exports higher than Venezuela’s. In fact, Venezuela is the world’s 9th largest exporter. Russian exports almost triple those of Venezuela and Saudi exports are five times larger. 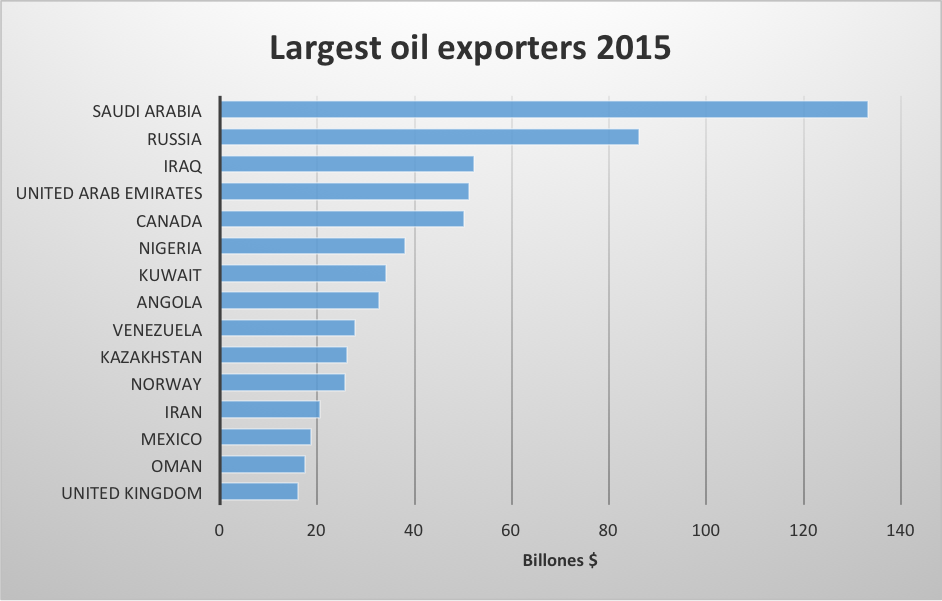 However, the important factor to analyze the economic impact of the fall of crude oil prices in exporting countries is not absolute exports; but rather it is the measure in terms relative to the size of the economy. If we consider the relative importance of oil exports as a percentage of GDP, Venezuela does not appear among the first places either. 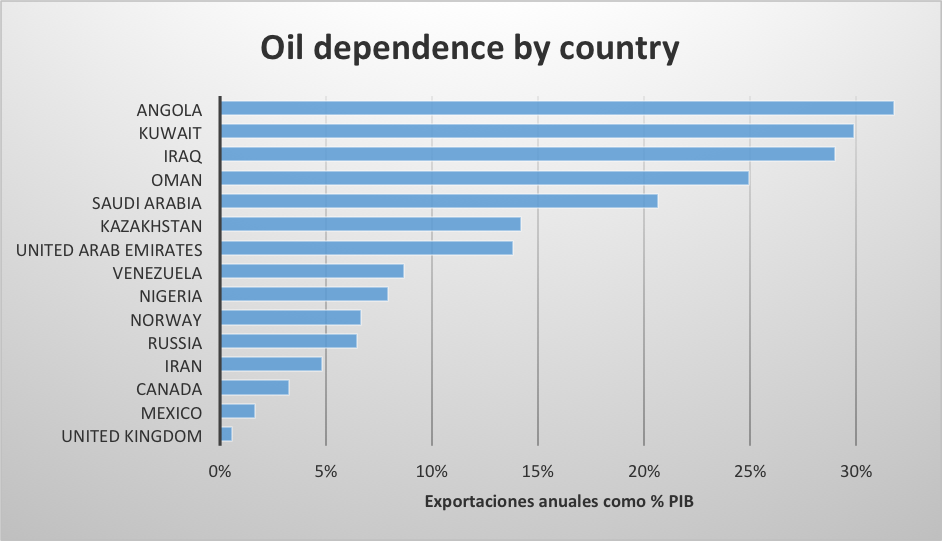 In this case, Venezuela ranks 8th in relative export importance, far from the most important countries. Angola, Kuwait, and Iraq’s exporting importance more than triple that of Venezuela when it comes to oil.

Both 2015 and 2016 have been difficult years for the economies of oil-exporting countries. After the price of oil barrels fell in the last quarter of 2014, economies dependent on black gold have suffered significant declines in economic performance, as was expected. 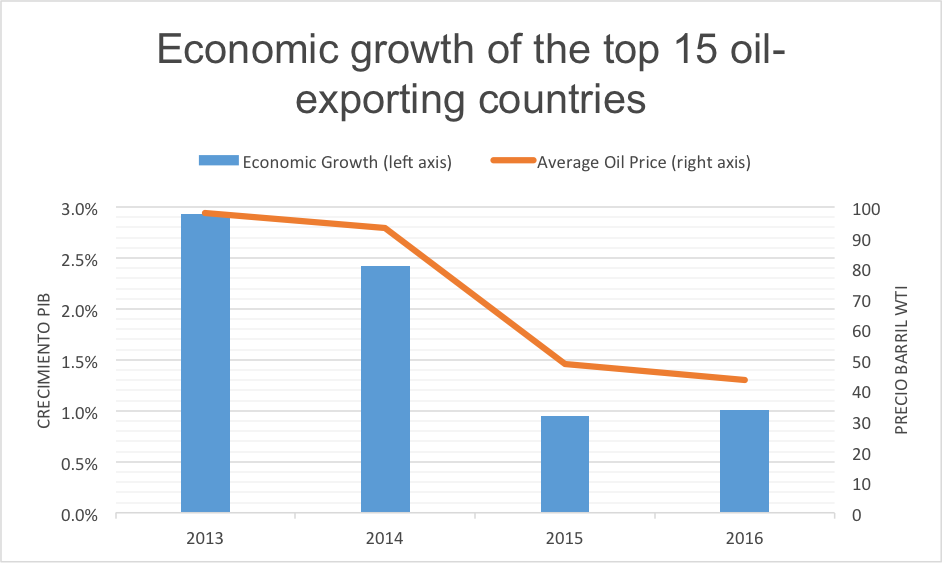 Although economic growth fell on average among all major oil-exporting countries, the impact of the fall of crude oil prices has been different in each economy. In theory, those economies more dependent on oil, such as Angola or Kuwait, would suffer the harshest declines in economic performance. However, the data does not support this thesis. Venezuela and, to a lesser extent, Russia have been the most affected. 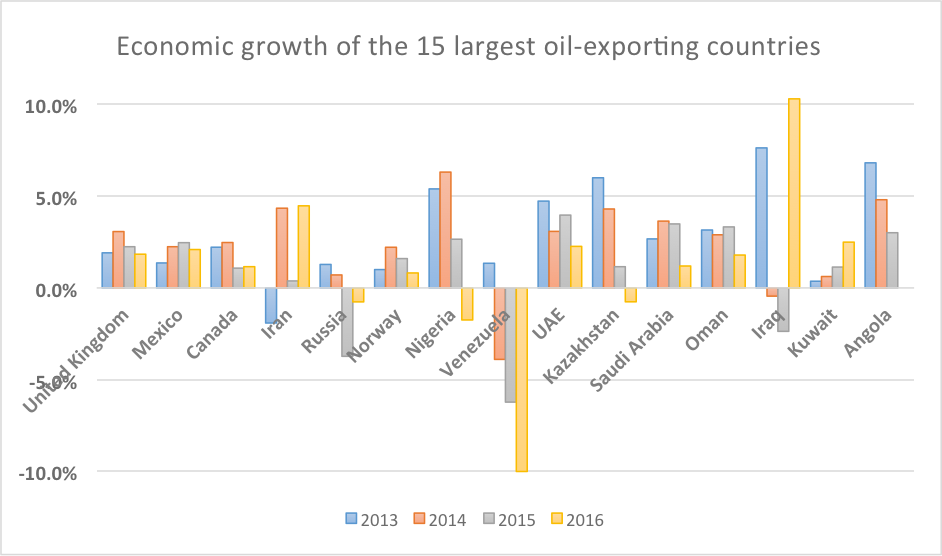 The graph of economic growth by country shows two trends:

1 – The countries with less exposure to oil prices have less volatile economic growth.

Those countries with less than 5% exposure to the oil market have been affected only slightly by the price of oil. The United Kingdom, Mexico, and Canada suffer to a lesser extent the falls in crude oil prices.

2- Countries with the worst economic performance are not those that have the most exposure to the oil market.

This trend is not what was expected. In this sense, two countries stand out: Venezuela and Russia. They are the only two countries that were in recession throughout 2015 and 2016; Russia being the 11th country with relative export importance and Venezuela the 8th.

If we compare Venezuela’s economic growth with that of other oil-exporting countries we can see the serious divergences that this article points out.

The true cause of Venezuela’s economic collapse

Venezuela is undergoing the typical collapse of a country that has been subject to years of all kinds of political interventions. The fall in oil prices is the external shock that brings to light the embarrassing result of years of price controls, currency controls, nationalizations, uncontrolled monetary creation, and economic dirigisme.

The economic imbalances that had accumulated over the years were hidden under the influx of dollars that incidentally came from oil revenues that grew in value, and not in volume. Lack of investment and low productivity per worker are the usual trend for Petroleum of Venezuela (PDVSA). The ability to increase production in order to counter the fall in oil prices is zero. 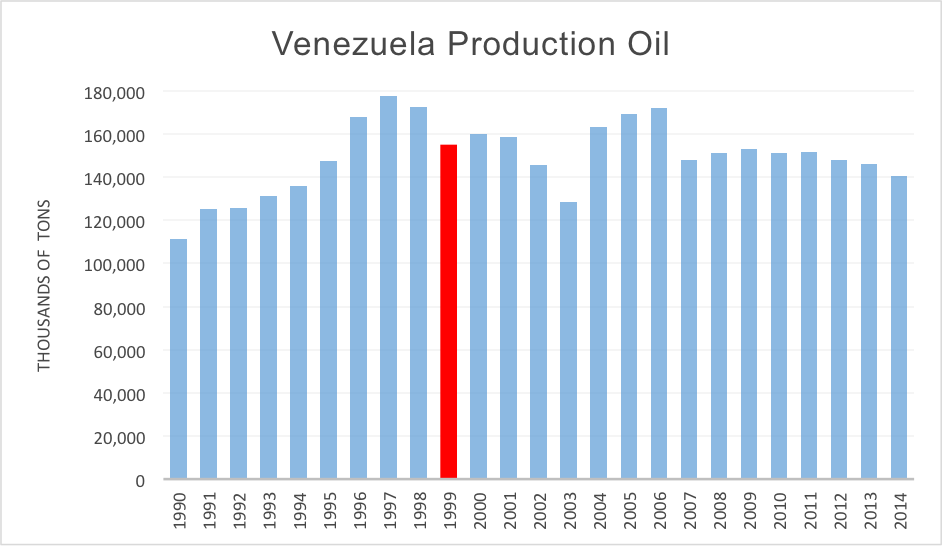 The Venezuelan government, which always lacked funds and didn’t receive any “help” from high oil prices at the time, did not hesitate to monetize all of the public debt necessary to cover its growing public expenditures without increasing taxes. This created hyperinflation in Venezuela. The population has even been forced to resort to bartering. The destruction of money means the destruction of the division of labor. In this environment, an annual fall of 10% GDP is perfectly understandable. 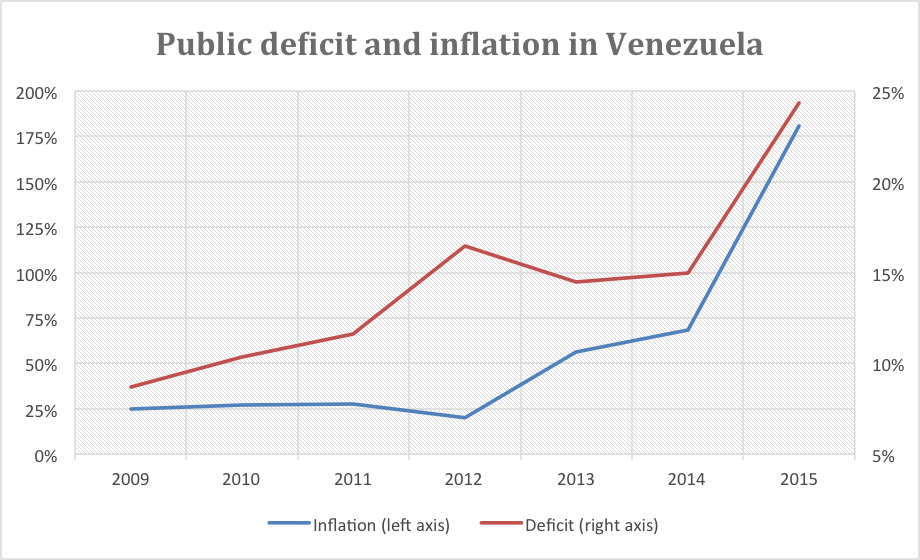 Price controls have completely depleted the commodities that are subject to such control, just as economic theory predicts. Having to trade food in the black market has radically increased the price of food. In 2015, the increase in food prices was over 130% in real terms (adjusted for inflation). This data only confirms the food emergency that Venezuela suffers. 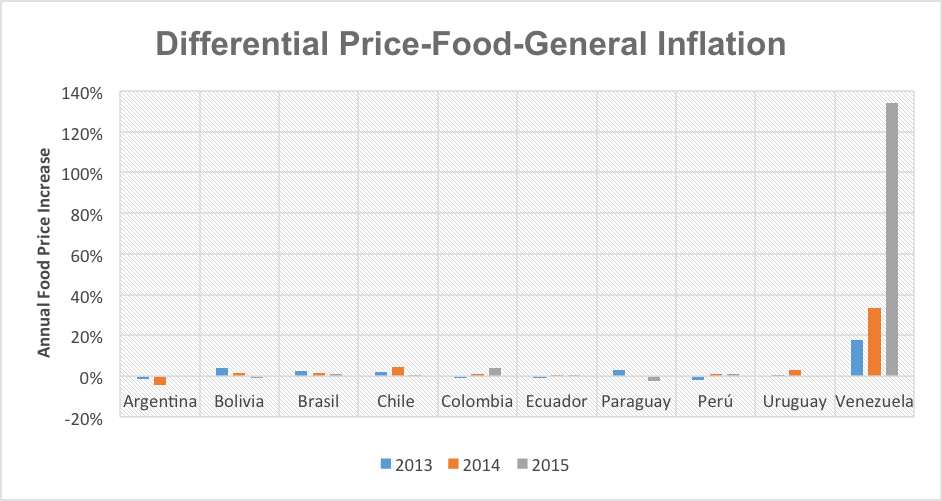 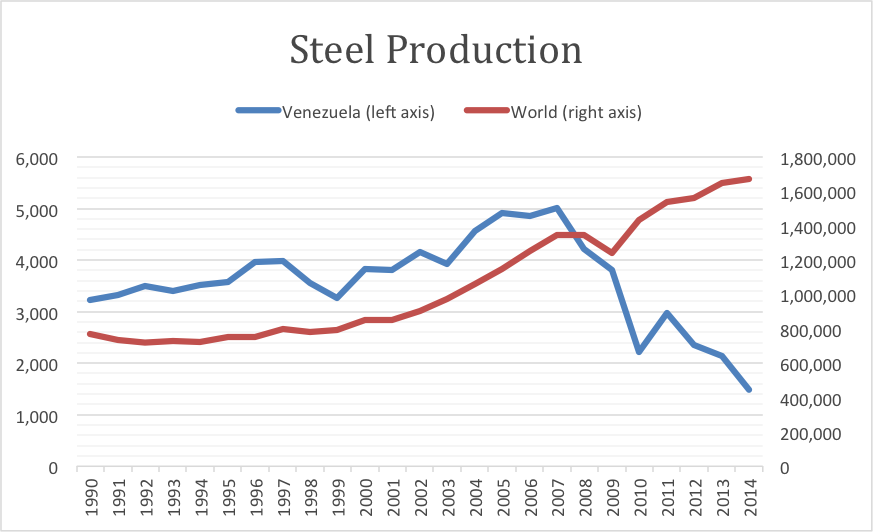 Venezuela and the embarrassments of the socialist paradise

In short, the Venezuelan crisis is anything but a crisis caused by the fall in oil prices. Not all oil-exporting countries are undergoing crises, and those countries that do suffer from a crisis do so much less severely than Venezuela.

The Venezuelan crisis has its roots in 21st century socialism and in the economic dirigisme that the political doctrine preaches. The fall in oil prices is nothing more than the event that uncovered the corpse of what used to be Venezuela’s economy.