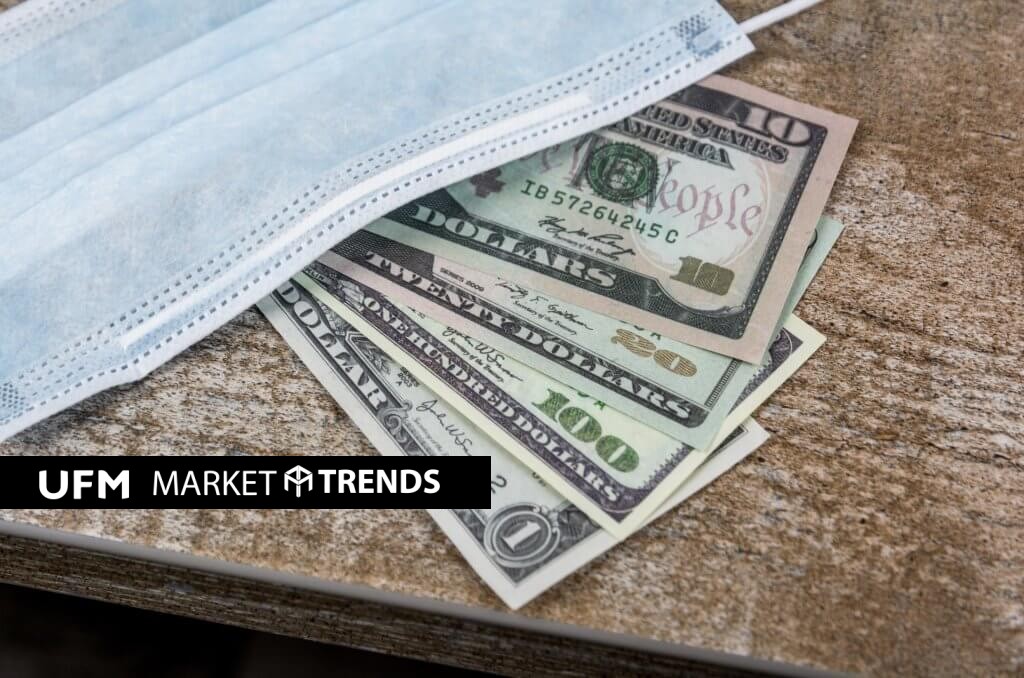 The inflation rate in the United States reached 4.2 percent in May of this year (core inflation, which excludes energy and food prices and preferred by the Fed, came in at 3.8 percent). Similarly, inflation appears to be creeping up also in other parts around the world.

This has led some people to speculate about whether we are entering a period of high inflation, akin to the period of 1970 to 1980, when inflation rates reached double digits.

What is the cause of the recent uptick in inflation? Should we be alarmed?

The Most Recent Data on Inflation

A quick glance at the data (Figure 1) shows that there exists a recent uptick in consumer price inflation. Last month, inflation in the United States (excluding food and energy prices) reached a level of 3.8 percent, exceeding the upper limit used by the Federal Reserve (of 2 percent).

A “higher than usual” inflation rate is, however, not a universal phenomenon in the rest of the world. For example, in Latin America, as I explain together with my esteemed colleague Daniel Fernández in our most recent macroeconomic report on Latin America (click here to download the report), a majority of countries currently have a lower inflation rate than before the pandemic.

But as is the case with the debate on climate change, the discussion is not about whether or not there is an uptick in inflation (or whether there is warming), but about its causes and future trajectory.

Is Monetary Policy the Culprit of the Recent Inflation?

In Figure 4, we can see why some are worried about inflation. The money supply (M1), in this case broken down into currency and deposits, saw an unparalleled increase. The greater the money supply, as some would argue, the more units of money will chase an equal number of goods. Therefore, according to the same logic, the price of every good must rise.

Various misunderstandings come into play here. A demand deposit does not “circulate”; it is a balance. It is the ancient-old mistake of confusing flow variables and stock variables. The M1 money supply shows a stock, whereas inflation is produced by a flow. In other words, if the stock is not spent, there will be no increase in monetary demand for specific goods.

It is attempted to account for this in a concept that economists have named the “velocity of circulation of the money supply.” Nevertheless, it is difficult to conceive of a more useless concept, since this “velocity” can never be measured or observed in the real world. Economists calculate the velocity of money by simply dividing the nominal gross domestic product by the money supply. That is, the velocity of money is a derivation, rather than a cause.

Another misunderstanding involves the alleged omnipotence of central banks over money-related matters. The central bank can only control the monetary base, not the broader money supply. According to some, when the monetary base is increased, banks will have more reserves at hand, and by having more reserves, they can grant more loans (and, that way, increase the broader money supply in the form of newly created deposits as banks decide to lend).

As a matter of fact, banks do not require reserves (notwithstanding the number of times the late Milton Friedman and his modern-day followers try to convince us to the contrary). Banks require deposits, capital, liquidity, a pool of potential solvent and willing borrowers, and – nowadays – all in all while being increasingly subject to banking regulations.

It is true that a central bank can force additional reserves onto banks, by increasing the monetary base. In earlier times, banks despised holding reserves, because banks generally did not earn interest on reserves. However, in today’s world, central banks have begun paying interest on reserves to banks, so banks have no reason to complain about “non-conventional” monetary policy anymore (technocratic jargon for preposterous monetary policy). Because banks do not require reserves, the mystic “deposit multiplier” model can go straight into the trashcan.

Increase in M1 Is Not a Product of the Central Bank, But of the Pandemic

What really happened is that many people were not longer able to spend a significant share of their income because of the lockdowns. This income accumulated in people’s bank accounts. This is why the M1 money supply rose. The personal savings rate (which can be seen in Figure 5) is clear evidence of this phenomenon: in the midst of the pandemic, the savings rate reached 34% of disposable income and in March this year it reached 28%, all because of direct government transfers by the Trump and Biden administrations.

Monetary policy has been extreme and does have consequences, but on other variables. The purchases of corporate bonds by the Federal Reserve lowered interest rates of the corporate beneficiaries, especially in the energy sector. Moreover, the Fed’s balance sheet expanded drastically: a larger share of the commercial banks’ assets is now invested in Federal Reserve deposits, thereby changing the composition of the asset portfolio of commercial banks and the profitability of those very same banks.

A greater M1 money supply, far from being a cause of inflation, is a symptom of an increase in savings caused by unusual circumstances.

Inflation is an increase in consumer prices. This increase can have a monetary origin, when the central bank monetizes a government’s debt above and beyond the (bank) savings in a country.

Nevertheless, inflation can also have a fiscal origin, when a government goes into debt and a larger share of savings is directed toward public spending. In this case, a government would bring future spending to the present (any used-up savings would not be invested, much less kept intact, and interest must be paid on money spent in the past). I refer to this phenomenon as “fiscal inflation.”

This type of inflation is reflected in the staggering increase in public debt – also unprecedented in times of peace – under both the Trump and the Biden administration. A policy that appeared unthinkable a decade ago, has become completely normal and accepted: “handing out” money indiscriminately to practically every citizen, paid for with public debt. We are living in difficult times as the generally accepted belief that spending like there is no tomorrow, financed with public debt, is a type of “free lunch.” As Frédéric Bastiat once said: “Everyone wants to live at the expense of the state, but they forget that the state lives at the expense of everyone.”

In Figure 5, we can see the astonishing fiscal deficit of the U.S. government at present. It does not seem as if the economic model of spending as a “drunken sailor” will come to a premature end anytime soon. The “new normal” does not consist of wearing face masks, but of an overextended and overindebted government.

In sum, what we are experiencing today in the United States, and to a lesser extent in the rest of the world, is an increase in consumer prices, caused by an unprecedented increase in government spending, financed by a spiraling public debt.

What Are the Consequences of This “Fiscal Inflation”?

The consequence of the staggering amounts of money “given away” by the U.S. government has been to fuel a speculative fever in stocks and cryptocurrencies, besides an (unsustainable) boom in remittances.

As a general rule, U.S. natives have invested their government checks in cryptocurrencies and stocks (as an alert observer could have noted in the curious case of the GameSpot fiasco), whereas immigrants have sent their surplus back home, where family members were not as fortunate and could not count on a government as spendthrift as the U.S. government.

In Figure 7, we can appreciate that the U.S. stock market (the S&P 500 index) almost doubled since April 2020 (an increase of almost 100 percent), whereas Bitcoin went up by more than 700 percent since the same month of April 2020. Both are at historical highs. Bitcoin appears to be the mother of all present bubbles.

In Figure 8, we can see how remittances to Latin American countries have been on the rise despite the pandemic. This is not a trend that can be generalized: there are remittance-recipient countries that did suffer a decline in incoming remittances, as is the case of India.

The most likely thesis is that immigrants used their government handouts to send (at least in part) money to family in their home countries, which would explain why more money than usual was sent home and remittances only fell in the first and second month of the pandemic (when the Trump administration had not yet began sending out government cheques).

Unfortunately, there is a complete lack of willingness to explain the real origins of the remittance boom in Latin America of 2020 and 2021, especially in the countries themselves.

My thesis is that the inflation that we are currently seeing is a type of fiscal inflation: spending brought to the present through massive borrowing by the U.S. government. The difference with other years of budget deficits is a difference of degree. In 2020 and 2021, the U.S. government borrowed at an astounding pace of 15 percent of gross domestic product (GDP).

In light of this, the fact that the economy would grow by 6 or 7 percent in 2021 (praised by some as an incredible accomplishment by the Biden administration) is, far from being a miracle, a complete failure if we allow public debt to enter the equation.

To the degree that government transfers (and the budget deficit) begin to taper off, my expectation is that inflation will come down a little bit as well. At the same time, producer prices are also on the rise, primarily because of an increase in energy prices. But double-digit inflation rates appear, at least for the moment, to be a remote possibility.

However, what does appear likely is that Biden, at the end of his presidency and without any major justification to continue his current public deficit and spending, will pass on an economy that grows at an even slower rate than in the last decade to his successor. After all, public borrowing competes in capital markets with private borrowing. The less private investment, the lower economic growth. This will be the hangover that remains after the fiscal binge that we are witnessing today.