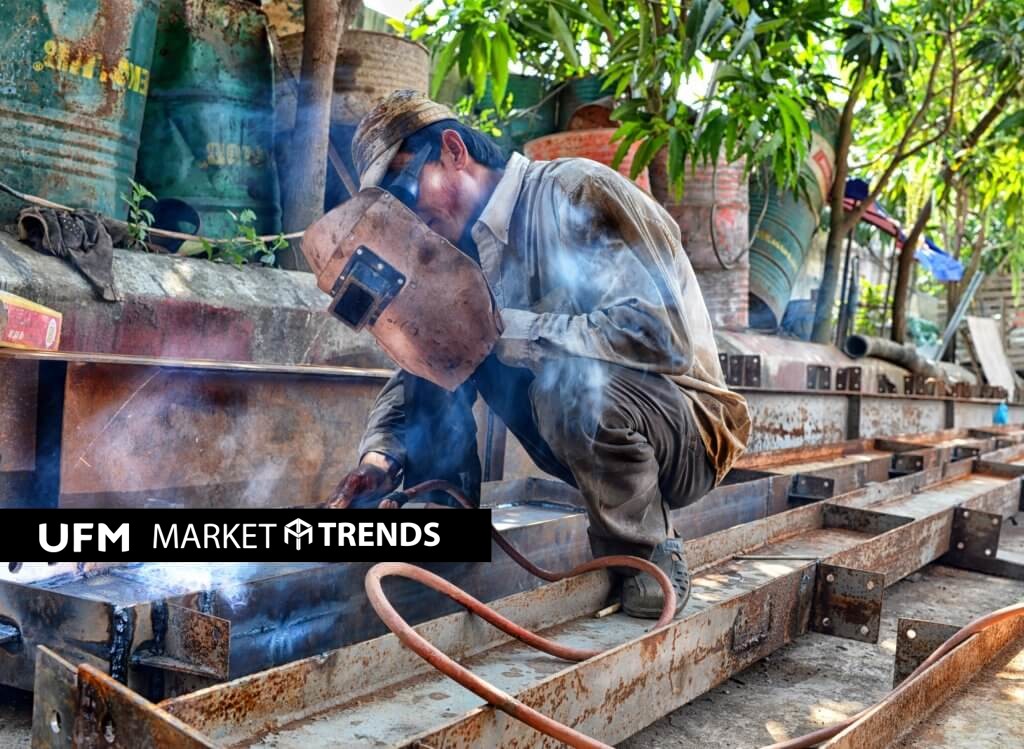 Work is a determining factor for personal success and social development. Furthermore, there is a socially accepted mantra around work that surrounds it with an aura of mysticism. It is said that hard work is what drives a person, and therefore a whole country. Is this true? This article tries to explain why the idea of hard work as the only determinant for development is incomplete. Work alone does not achieve the economic development desired by all.

When you start talking about hard work, it is hard to find the best way to explain it: do you explain it on the basis of strength or intelligence? An easy way to try to measure it is based on the work hours of each individual worker. Graph 1 shows the average hours worked per year. Graph 2 shows the average hours worked per week in different OECD countries.

On the surface you can see a simple pattern: richer countries work fewer hours. Does it make sense, then, to believe that people who work the most hours are the ones who live better? The primary data seems to indicate the contrary; yet this idea goes against common sense. In almost all societies and religions hard work and effort are welcome. But if they do not determine the development of a country, what does?

As time passes, we work less: a comparison between generations

The previous questions require a more detailed analysis of the data. Why do richer countries work “less hard” than poorer ones? Why is the effort of those who work the most not rewarded by a better quality of life? To understand these questions we need to add variables to the analysis: an important variable to analyze is how the number of hours worked has changed over the years. Graph 3 shows the annual number of average working hours for three different generations, with an approximate gap of 20 years per observation. 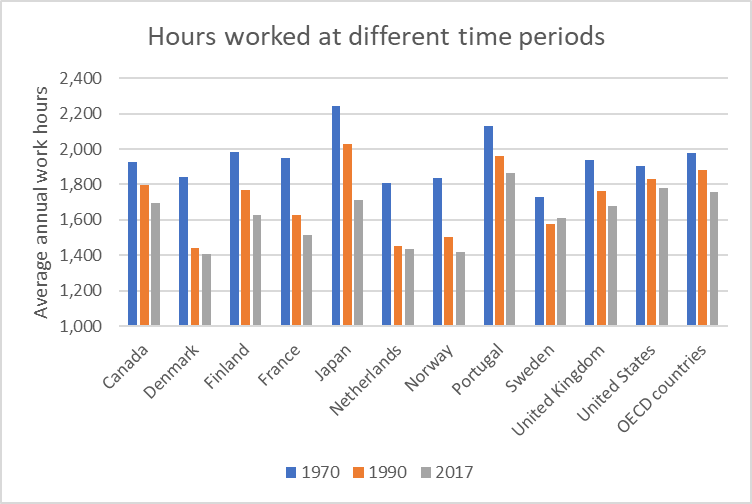 After the 70’s, there was a pronounced decrease in the number of hours dedicated to work in OECD countries; the trend is more evident in European countries. In the case of Japan, the decrease was more than a quarter in 40 years.

But time by itself does not explain anything. Therefore, it is important to remember that all OECD countries have grown economically in those 40 years. The resulting relationship is between economic development over time and the decrease in annual working hours. This is why the poorest countries work more hours. This can be seem more clearly in graph 4, which shows the development of annual working hours over 40 years for three world economic powers. Even though the decrease is less pronounced in the United States than in other countries, the trend has been decreasing over the years. 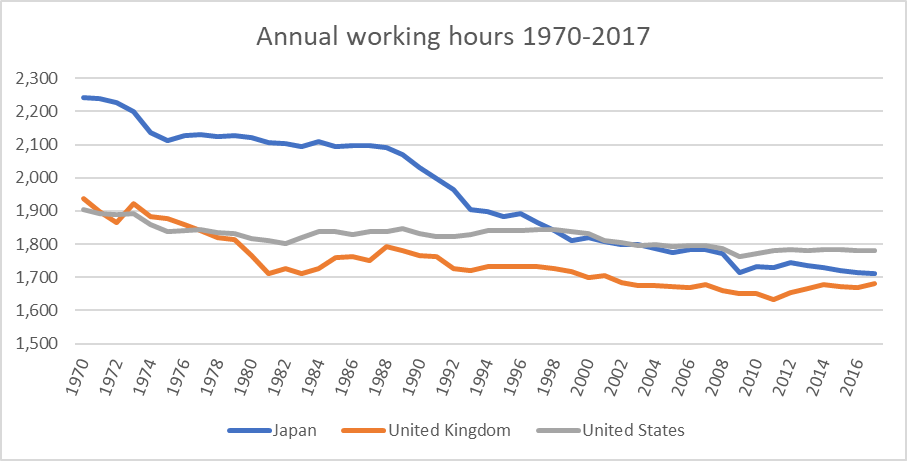 Analyzing the data for annual working hours and comparing them against GDP per capita shows that the richness-quantity of hours worked ratio that we are assuming to is true (graph 5). The higher the GDP per capita, the fewer hours worked per year. In societies, wealth causes less need for work. But the question begs: why? 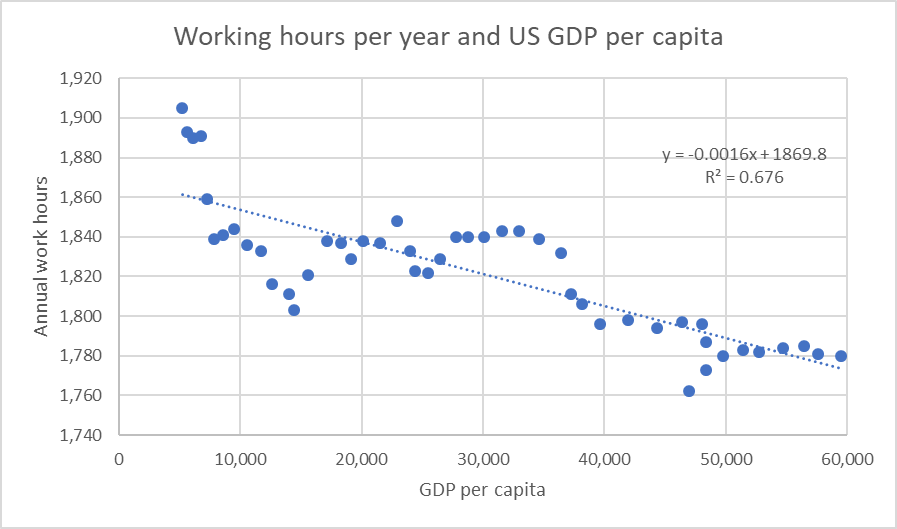 The quick answer to the question of why workers in developed economies work less than in poorer countries is because the average productivity of workers in rich countries is higher. Having more access to technology and techniques that make work more efficient, requires less work hours to achieve the same result—perhaps even a better one. Graph 6 shows the relationship between productivity and average annual working hours for 2014. Productivity is measured as GDP per hour worked. 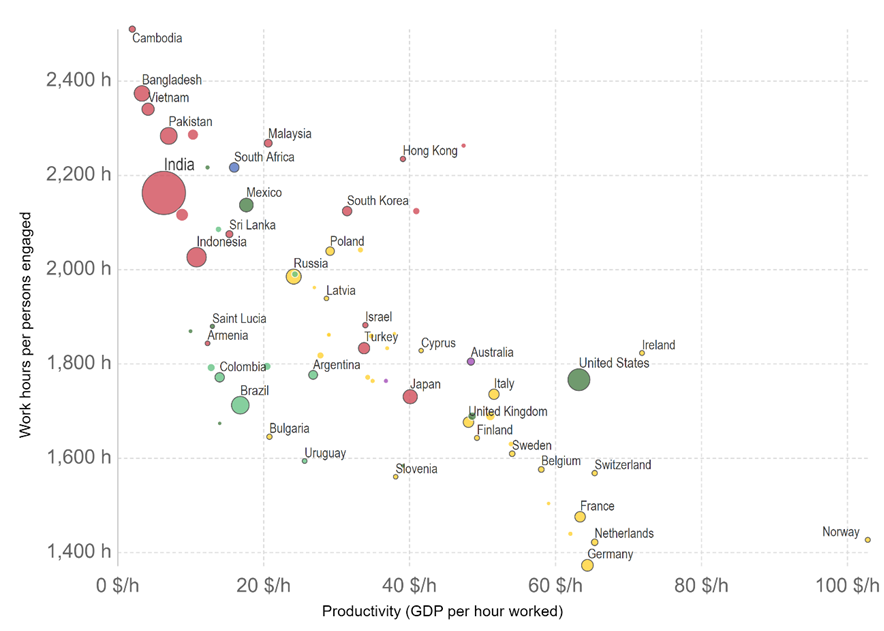 Source: University of Groningen, Our World in Data, World Bank.

There is a strong relationship between productivity and annual working hours per worker. More work is not needed to produce more. However, to achieve greater productivity a second factor is necessary: capital. Worker productivity improves with technology or better production techniques. To have access to both, capital assistance—both physical and human—is necessary.

Hard work, from our grandparents

Developed countries spent decades and centuries of working and saving in order to reach the capital that they currently have. As we previously mentioned, work does not automatically bring economic development. However, work makes the way to the formation of capital through saving. As discussed in another Market Trends article, capital accumulation is the foundation of economic development, and the lack of capital is the most well-known poverty traps today. Yet many countries managed to get rid of their poverty traps in the last 200 years through hard work and saving. This means that many generations that resigned to consume all of their present production and decided to save in order to have a better future. These savings were then invested by disruptive entrepreneurs and innovators who created value. Finally, this capital increased the productivity of the following generations and gave way to the quality of life that we see in first world countries. This is why salaries in these countries are higher than in less developed countries and why less labor is needed in these countries. Since capital improved the marginal productivity of labor—the marginal contribution of each worker to the productive chain—his salary increases because his performance is better.

The cultural factor of work and savings

Something to take into account when analyzing the importance of work in economic development is culture. Culture in economics is a vital factor to understand social-economic dynamics. A culture dedicated to work and one that praises persistence and perseverance increases a country’s chances of emerging from underdevelopment. These characteristics are present in most of the countries of East Asia. The so-called “Asian tigers” are a good example of work culture, saving, and investment—values that have made these countries experience a great economic development in 70 years.

However, other cultures do not have the same culture of saving and, therefore, their work does not yield much fruit. Latin America lacks capital primarily because of its low levels of savings, barely surpassing the average for sub-Saharan Africa. The absence of a culture of saving in Latin American society is a constant that has condemned it to economic backwardness and underdevelopment.

There are many explanations for the lack of saving culture in Latin America. However, behavioral economists claim that a determining factor is the difficulty that people have when calculating future needs. It is not very intuitive for the average person (who also does not have proper education) to discount the value of their postponed consumption in order to receive more in the future. And to complicate things, their low incomes do not allow them to constantly save, since that money is needed to cover their most basic needs. This is why foreign investments are so important for developing countries: the need for capital can be met without the need to restrict consumption and the current standard of living. It’s a shame that certain groups fail to understand this logic and who, through their actions, keep millions of people in poverty.

Hard work is important, but it has to go hand-in-hand with capital formation in order to improve worker productivity and generate more returns with less effort. Capital, both physical and intellectual, allows workers to have better living standards, either through higher incomes or by needing less hours to complete their work. This is why savings and investment are the most important factors in the development of economies. Believing that work by itself will succeed in moving a country forward is to ignore the basic premises of economics. Even worse, this train of thought continues to condemn million to live in poverty.