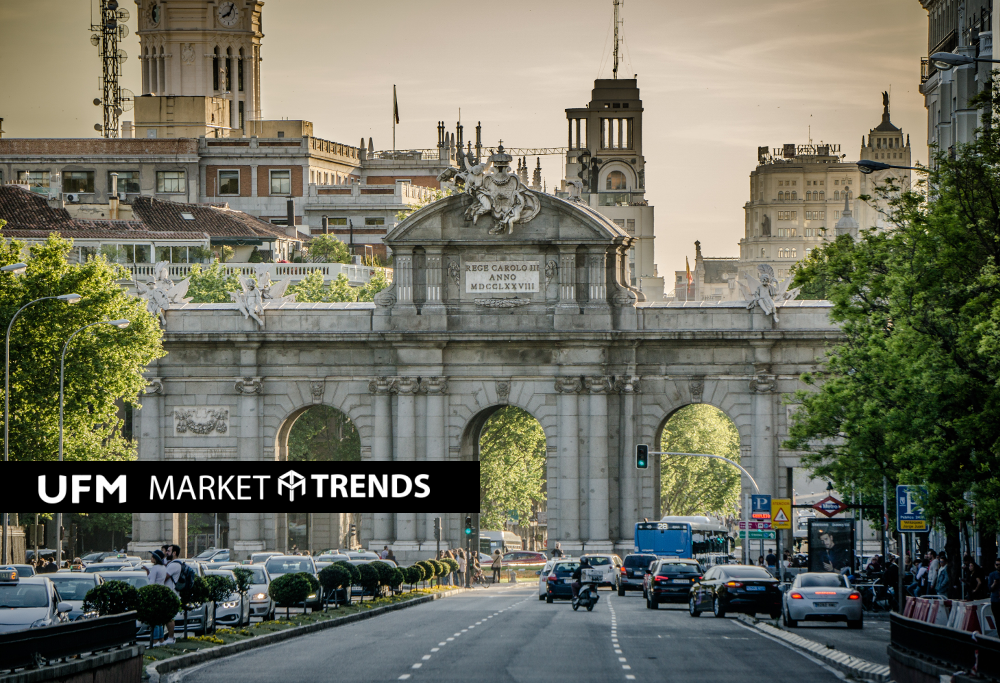 The drums of recession can now be heard across the world. More and more leading indicators of economic activity point to a recession in the near future. At UFM Market Trends, we have been warning of recession since the beginning of 2019. Now it seems that other economic analysts are agreeing with us.

In a previous article, we analyzed various indicators of a global economy and concluded that the global recession could come in six to twenty months.

In this article we analyze whether a recession will affect the Spanish economy and whether Spain is prepared to face a new recession.

Will Spain Go into a Recession?

If there is a global recession—and as we argued in the previous article, the probability is increasing—Spain will suffer and might enter a recession. Let’s look at the leading indicators in Spain.

First, Spain has grown the most among European countries since the last recession ended in 2013, especially since 2014, although Spain’s decline in economic activity prior to 2014 was also much more pronounced. We can also see that the Spanish economy was growing much more rapidly than the Eurozone economy before 2009.

As we can see in figure 1, Spain is experiencing a slowdown, although the decline is less pronounced than that of the Eurozone since 2018. Spain’s growth has slowed at the same pace as before 2018.

Spain’s Purchasing Managers’ Indices (PMIs) are the best leading indicators of GDP growth, although they provide no information regarding the causes of the decline. They are derived by simply asking purchasing managers of companies whether they have purchased more or less from their suppliers than in the previous period. If more than half answer that they have made more purchases, it suggests that the economy will grow. If less than half answer in the affirmative, it suggests the economy will slow down.

The data show that the deterioration in economic activity in the world is also evident in Spain, although it is less extreme.

How Prepared Is Spain to Face a Global Crisis? Positive Signs

As we have just seen, Spain is not immune to the current global slowdown and a possible recession. The question is, how prepared is Spain to face an economic storm?

In some respects, Spain’s economy is much better prepared to face problems than in the previous recession. In other respects, especially those indicators related to the public sector, Spain is in a more fragile situation than in 2007. Let’s first look at the good signs.

The Spanish economy is much more diversified today than in the previous crisis. In fact, the Spanish economy currently dedicates fewer resources (in relative terms) to fixed capital formation in construction and real estate than it did in 1995.

If we only analyze the percentage of gross fixed capital formation in construction and real estate, we can see how it has plummeted since 2007.

For its part, investment in industry has grown exponentially since 2007, almost doubling its relative size in ten years.

Finally, Spain’s economy was incredibly dependent on external financing before the last recession. Since 2013, however, Spain has had a positive current account balance. This means Spain has spent more than seven years producing more than it has consumed and settling its debts.

How Prepared Is Spain to Face a Global Crisis? Negative Signs

The Spanish economy’s greatest weakness is the public sector. The Spanish public sector has been especially slow to adjust to the decline in postcrisis revenue. Regarding its deficit, the Spanish government has not been able to satisfy the Maastricht criteria required to be in the Eurozone (deficit of less than 3 percent of GDP). This is despite Spain’s pronounced economic growth since 2014, as shown in figure 1.

The year 2018 looks considerably different from 2006. In 2006, Spain had a large surplus, while in 2018 it had a significant deficit. In fact, Spain is guilty of having among the largest deficits in the Eurozone, amounting to almost 50 percent of the total in 2018.

social security is the culprit. social security went into a deficit in 2010, and since then it has accumulated record deficits year after year. In 2018, social security accounted for 57 percent of Spain’s deficit. This is particularly serious if we consider that social security has not funded health care since 1994. The deficit is due solely to pension payments (see here for a detailed analysis of the accounts of social security).

This problem significantly hampers the Spanish state’s capacity for maneuvering. The decline in revenue and increase in expenditures a recession would cause could bring the public deficit to 10 percent of GDP, a figure that the already-battered public accounts could barely withstand. Such disordered public accounts could spoil the private sector’s recovery efforts and usher in a spiral of wealth destruction.

There seems to be an increasing consensus among economic analysts that a global recession is coming soon. Leading indicators signal that the major world economies are suffering.

A global crisis would significantly hamper Spain’s economic growth. The good news is that the Spanish private sector is much better prepared for a crisis and recession today than it was in 2007. The bad news is that the public sector finds itself in a critical situation with minimal room to maneuver in such an event.

The Spanish economy has much better weapons to confront the global economic slowdown than in 2007. All that is missing is for the Spanish public sector, especially social security, to set its accounts in order.

Crises and recessions offer positive opportunities to the people and countries that have the will and ability to seize them. It is up to the Spanish public sector to organize the public accounts and lay the groundwork for Spain to take advantage of those opportunities.