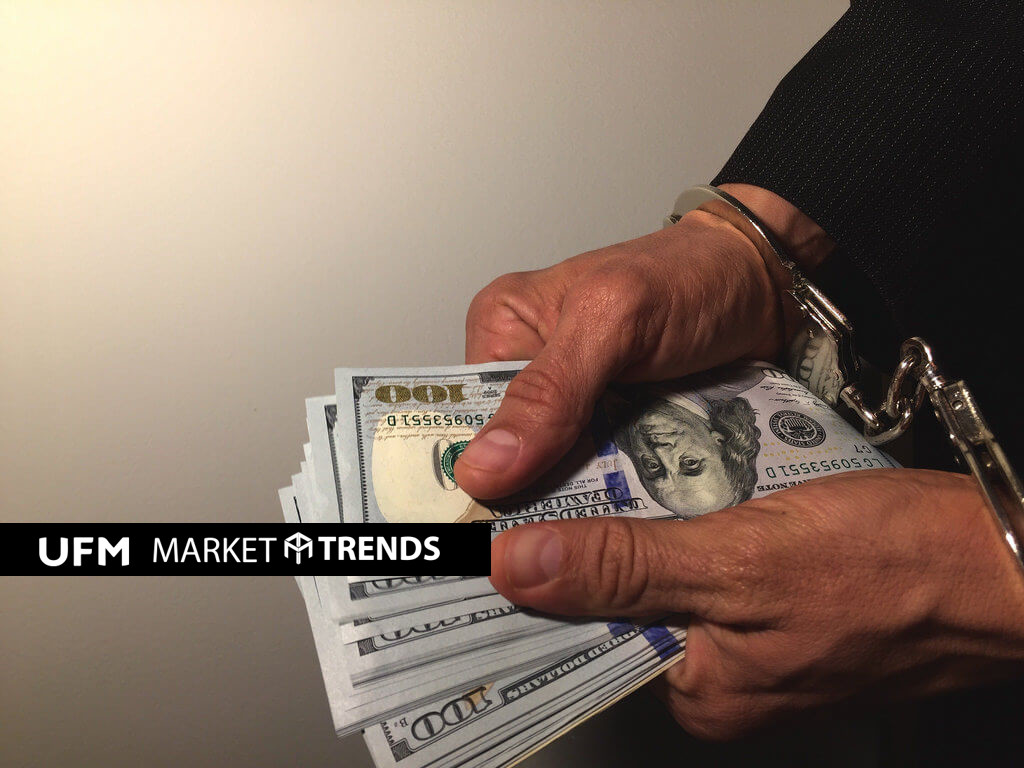 This article, part of a series of articles on corruption, focuses on the relationship between corruption and citizen welfare. There is a popular belief that a radical fight against corruption is of primary importance. If corruption were the only evil affecting poor countries, ending it would help them achieve their longed-for better standard of living.

Is Corruption a Problem?

Corruption is a complex phenomenon. It has been studied by all branches of the social sciences, with diverging results. Some consider it the worst of all evils that can affect a society; others consider it productive. This article tries to elucidate both ideas.

The position that is the best known and most commonly accepted is that corruption is a problem. The World Bank is one of the most important defenders of this thesis: one of its main objectives is to fight against corruption. The basic reason why the World Bank is against corruption is that it claims that it affects governments’ ability to make socially necessary investments, distorts political decision-making, reduces tax revenues, fosters inefficiency in the private sector and misallocates resources, creates uncertainty, and leads to other types of crime.

The second position, less known and counterintuitive, emerged in the ’60s with a group of academics who considered corruption a type of “oil” that lubricates the machinery of the state and business. Nathaniel Leff was one of the first to study this thesis. He believed that corruption could help eliminate inefficient regulations in countries that were prone to them. Samuel Huntington and Colin Leys were other important academics who found beneficial effects of corruption. Recently, Chiung-ju Huang of Taiwan’s Feng Chia University conducted a study in which he found no evidence that corruption hampered economic growth in Asia and the Pacific. Furthermore, he stated than an increase in economic growth leads to an increase in corruption. Researchers at King’s College London concluded that in Latin America, corruption has a positive impact on the development of transnational businesses that enter countries with a high level of perceived corruption, and even contributes to the performance of economies in some cases.

The two positions reflect how elusive corruption is. Statistical analysis is necessary to navigate in this sea of ideas, and a first approximation must be found of the relationship between corruption and people’s well-being.

Measuring people’s well-being has always been a problem for economists. Well-being is not only money or health: both variables are important. It makes sense that having more money and access to material goods improves the well-being of people, but one should not fall into the error of thinking that money is everything. Health is also important: people need to enjoy good health to enjoy material wealth. Despite its limitations, a measure that is commonly used to analyze economic welfare is GDP per capita, which measures the production level of a country divided by the population in a given year.

Corruption is also difficult to quantify. To analyze it, we can use data from the Corruption Perception Index (CPI), an index developed by the NGO Transparency International. This index measures and classifies 180 countries according to their perceived level of corruption in the government sector. This classification is based on surveys of experts and entrepreneurs from each country, weighted in an index composed of surveys of sixteen different institutions such as the World Bank, the Economist, and the World Economic Forum.

Figure 1 shows the relationship between the ranking of countries according to their level of perceived corruption and GDP per capita. Data for both variables are from 2017. 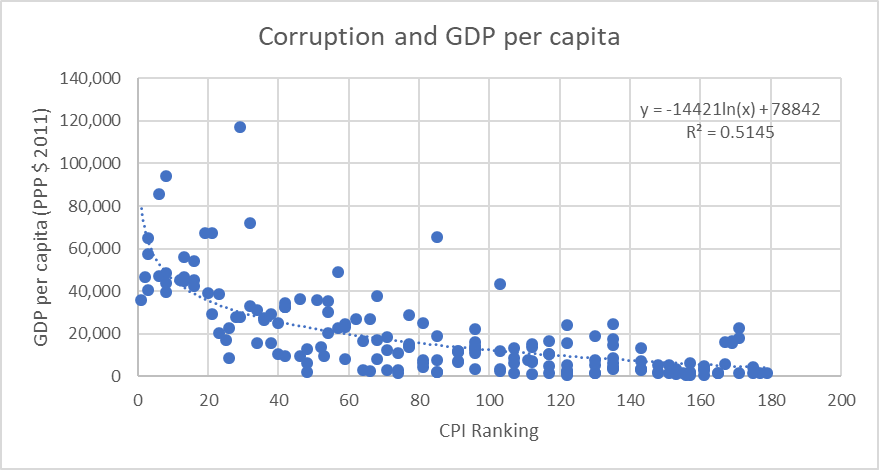 Source: Transparency international and World Bank. GDP per capita data are adjusted by PPP to 2011 US dollars.

The graph above shows a relationship between perceived corruption and GDP per capita. The ranking extends from 1 to 180, with 1 being the least corrupt country and 180 the most corrupt. The best-ranked countries show higher GDP per capita. In contrast, the poorest countries appear at the bottom of the CPI ranking. Michal Paulus and Ladislav Kristoufek from Carolina University in Prague were the first to analyze this relationship. Grouping countries that share similar properties and have close positions in the ranking, they found four different groups. The separation in the level of wealth and corruption of these four groups is clear, and both variables are clearly connected.

When it comes to health, a correlation is also seen. Figure 2 shows the relationship between the CPI and infant mortality rates (both data sets from 2017). In this case, the CPI is measured as an index for which the countries with the highest score are the least corrupt and vice versa. We see a gradual reduction in infant mortality as the CPI increases. 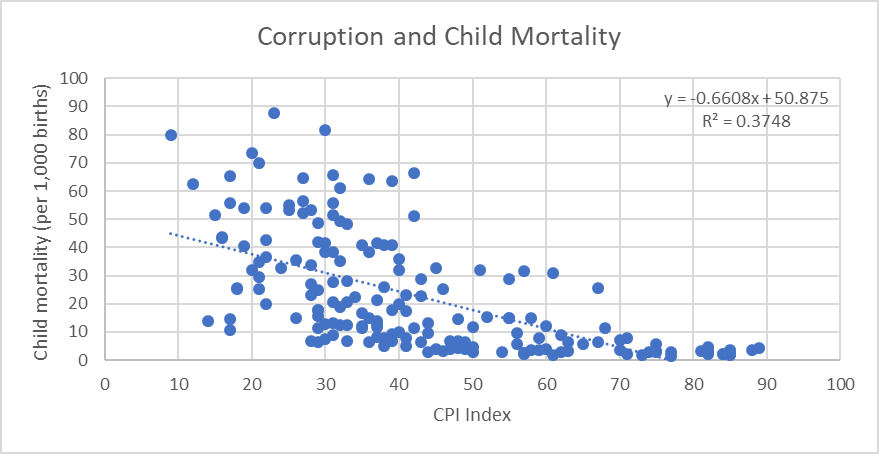 Figure 3 shows a similar relationship, but with life expectancy at birth instead of infant mortality. As the countries’ CPI scores increase, life expectancy increases. The more corrupt a country is, the lower its life expectancy. This relationship is one of the most important in the analysis of well-being because most people want to live not only better, but also longer. 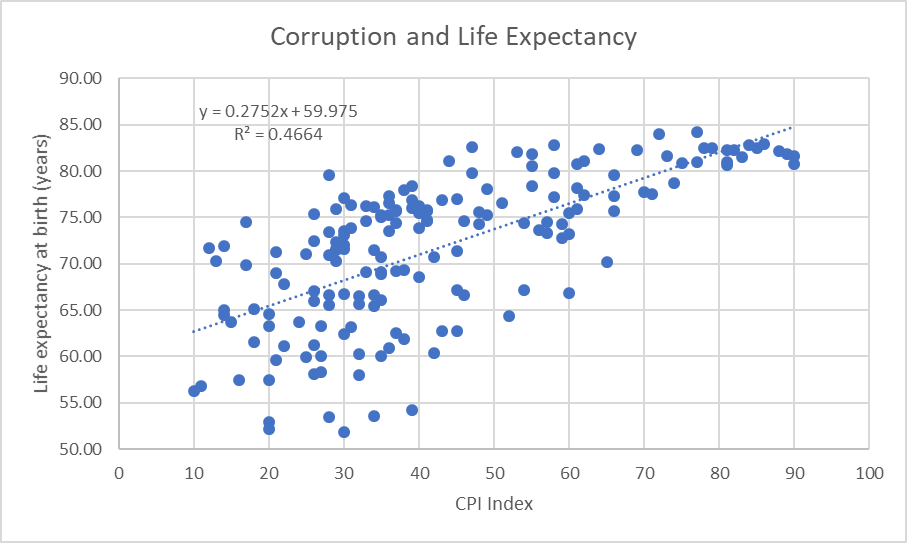 The Problem of Using a Single Variable

The coefficient of determination (R2) is included in the three previous figures. This coefficient indicates how much of the variation in Y is explained by the variation in X—in other words, how much of a change in a variable is explained by the change in the analyzed variable. In the last two figures, the coefficients are less than 50 percent, and coefficient in the first barely surpasses that percentage. This shows one of the most basic problems of economic analysis: a single variable cannot explain everything. It is necessary to take into account all of the variables that cause an effect in order to fully explain a phenomenon. However, this is practically impossible. That is why it is a mistake to try to understand well-being by analyzing health, wealth, or any other variable in isolation.

The coefficient of determination demonstrates that one cannot explain GDP per capita, infant mortality rate, or life expectancy at birth by corruption only. Yet some of these variables seem to be explained by the perception of corruption. Even with a basic statistical analysis, such as the one in this article, it is evident that corruption and human welfare have a certain degree of correlation.

It is important to understand that because corruption is not the only problem these countries face, corruption does not explain 100 percent of the level of wealth or well-being. Corruption is a problem for economies, particularly those of poorer countries. Yet we cannot ignore the fact that these countries have other problems that trap them in poverty, such as the lack of capital generation, which, in the author’s opinion, is more important.

A fight against corruption is not all that is needed to lift countries out of poverty. To focus solely on corruption and ignore other high-priority social problems, such as extreme poverty or chronic child malnutrition, is to fail to understand that in social phenomena there is no single cause. Since none of the variables are completely explained by corruption, it does not make much sense to dedicate efforts solely to this struggle. This article serves as an introduction to this idea, one that has been little explored in Guatemala but is of vital importance if you want to improve the standard of living of the poor. Because, as mentioned in the beginning, there are no countries without corruption, to try to eradicate this evil completely is to fail to understand that every organization is prone to corruption.

As we will discuss later, there is no single recipe to fight corruption and it is a battle for the very long term. To pretend that this is the only way to improve the standard of living of Guatemalans is to condemn the next generations to live a life of poverty. It is important to understand that the fight against corruption is a fight against poverty. But there are other approaches as well.