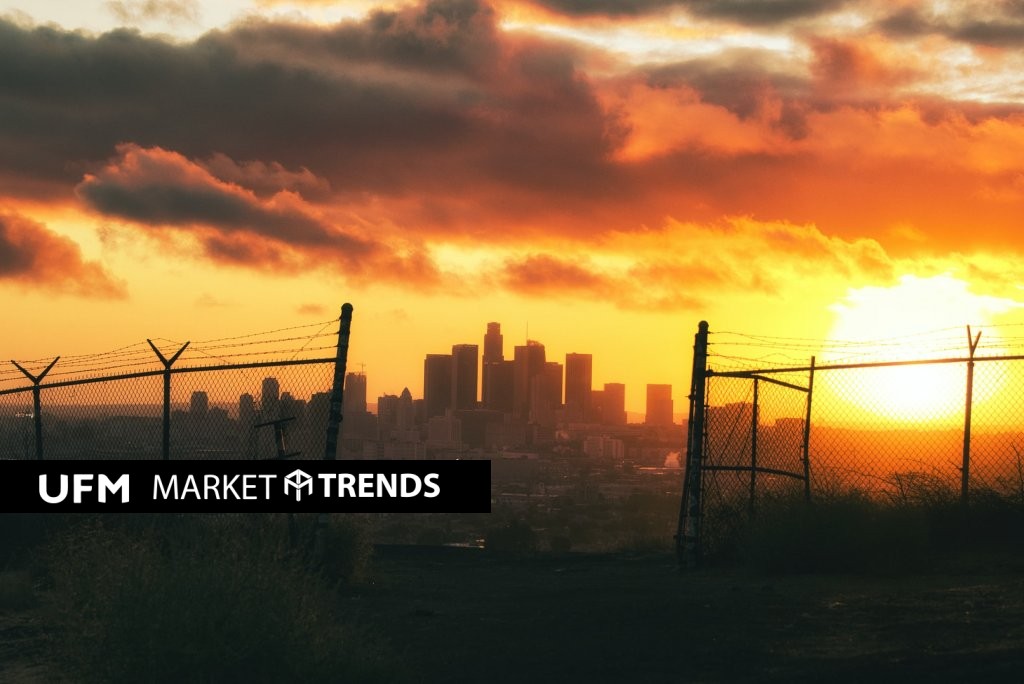 More and more economists and finance specialists are warning of the potential arrival of a new “Minsky moment.” The last time this term was used with such conviction was in 2008 at the onset of the Great Recession. It seems that 2021–22 could have some parallels with the world’s last severe recession.

The Twentieth-First Century: The Century of Debt

Up to now, the twentieth-first century could be called the century of debt, and if things continue the way they are, it could well be called the century of the great debt default. At the beginning of the century, the extremely low interest rates promoted by central banks in practically the entire developed world caused a frenzy of private credit creation and a gigantic financial and real estate bubble that exploded in 2008 with dire consequences for the world economy.

Central banks, heavily pressured by politicians, redoubled their commitment to low interest rates, causing public overindebtedness to a degree unprecedented in times of peace. In 2020, when the growth model based on the accumulation of public debt and low interest rates seemed to start to weaken, the COVID-19 recession arrived. The worldwide excess of public spending in 2020 has not been corrected, and it does not appear it will be corrected anytime soon. The new public debt is adding fuel to the fire. And the accumulation of it (and also private debt, especially that issued by companies) could be reaching the point of no return.

What Is a Minsky Moment?

Hyman Minsky was a post-Keynesian economist who developed a very insightful taxonomy of financial relationships. According to him, the finances of a capitalist economy can be summarized in terms of exchanges of present money for future money.[2] The relationship proposed by Minsky is as follows:

Minsky articulates three possible types of income-debt relationship in companies (although he extends the analysis to all economic agents):

According to Minsky, when things are going well in an economy and income expectations are met, corporations begin to err on the side of optimism and excessively increase their debt. This causes a shift from a stable situation (in which hedge companies are the norm) to an unstable one (in which Ponzi companies are the norm). In a Ponzi situation, the economy will experience widespread defaults and a financial and economic crisis.

An economy is said to be in a Minsky moment if debtors are unable to pay down their debts (a speculative situation) or unable to pay the interest and the principal (a Ponzi situation).

Minsky was partly right. He accounts for a common truth of financial crises: issuance of debt was abused in previous periods. As a caveat, though, taking into account monetary and financial state interventions—mainly but not solely those of central banks—perhaps the cause of this degradation of debt quality is not a market problem, or at least not exclusively. The crisis may be exogenous to the market (caused by public authorities) or endogenous but amplified by exogenous factors (public authorities contribute to it).

The Economy Has Been Zombifying for Two Decades

As already discussed, global debt has grown more rapidly than the global economy over the last ten years, so it seems credit quality has indeed degraded. The income needed to pay off debt is growing much more slowly than the debt itself.

An additional piece of evidence to support this argument is the increase in the number of “zombie companies.” A zombie company is one whose earnings before interest and taxes are less than or equal to its debt service (it coincides exactly with Minsky’s definition of speculative and Ponzi companies, taken together). A zombie is a wonderful metaphor because a zombie moves and appears to be alive but is in fact dead. A zombie company also moves and appears to be alive—it generates activity, employs workers, and produces goods—but in reality is (almost) dead. It is (almost) certain to die given its inability to pay its debt with its own means. The number of zombie companies has increased exponentially in the United States in recent years, according to a Bank for International Settlements (BIS) report. Furthermore, the probability of remaining in a zombie state has increased. And in fact, zombification is a reality in almost every part of the world. 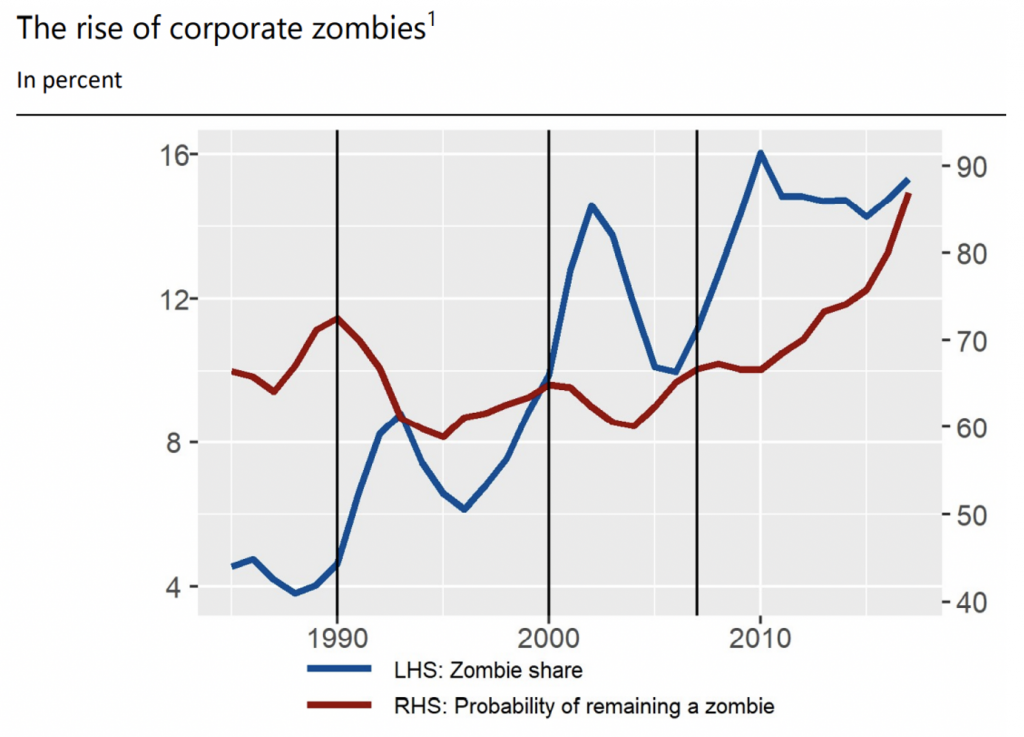 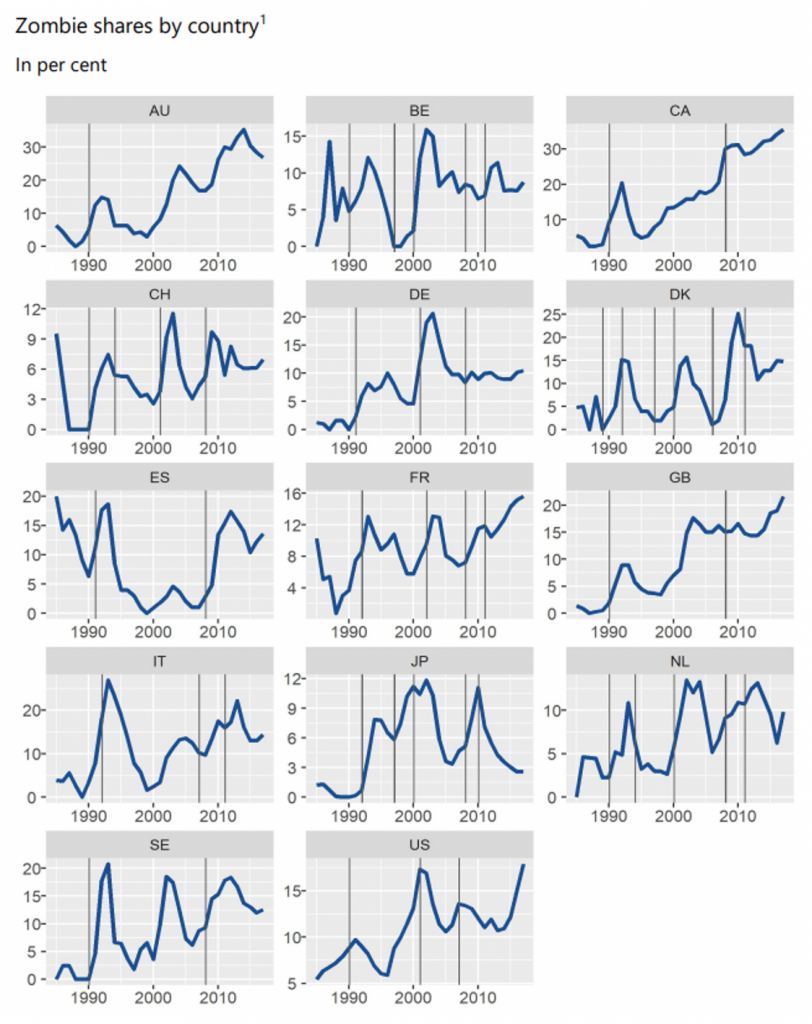 However, the BIS data end in 2017. What has COVID-19’s impact been on an already-zombified global economy?

The most recent data on company interest coverage (financing cost/earnings) are from the Fed and refer to the North American economy. In the figure below we can see that the median coverage ratio began to fall at the end of 2018, which is consistent with our hypothesis that the economy’s growth model, based on cheap debt, was beginning to run its course. The pandemic has hammered the median coverage ratio. Although the ratio has been recovering since the second half of 2020, it is currently at the level seen in 2009, in the middle of the Great Recession.

Even more revealing is the interest coverage ratio of the companies in the first quartile (that is, the 25 percent of companies with the lowest ratio). This indicator has been below 1 since 2012; in other words, zombification has accelerated since then. Keep in mind that a ratio lower than 1 means that a company’s profits are insufficient for it to pay its financing costs (it is a Ponzi company).

The interest coverage ratio for companies in the twenty-fifth percentile reached almost 0 just before the pandemic (their profits had almost disappeared). Since then, the ratio has been negative (these companies recorded losses). Observe that these companies have not recovered, while companies in other quartiles have. Their ratio is currently just above −1, which means that their losses (before interest) are nearly equal to their financing cost. This is a total disaster. At least 25 percent of US companies are financially dead.

One would expect that these companies would begin to go bankrupt, and this is indeed what is happening. According to the Fed, 2.5 times more zombie companies (as a fraction of all companies) went bankrupt in 2020 than in 2019 (<2 percent in 2019 and around 4.5 percent in 2020).

Curiously, the zombie companies that survived 2020 are seeing their valuation skyrocket. Their aggregate value already exceeds $6 trillion, while in 2019 it was close to $2 trillion. 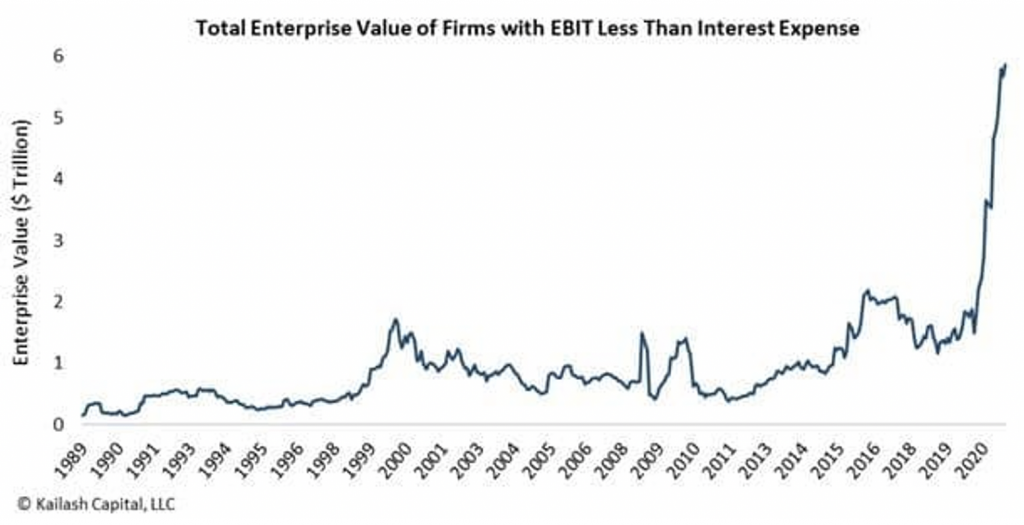 Markets are now extremely complacent. The fundamentals do not seem to justify their optimism. Zombie companies, which were already a problem in 2019, have not only not been killed off but have multiplied. The zombie apocalypse could be closer than we imagine, and we do not have enough Will Smiths in the world to save us.

In a future article, we will analyze the impact of restrictive monetary policy (tapering) on zombie companies.

[1] In our opinion, the main problem with Minsky’s view is that he situates his taxonomy in a very flawed macroeconomic theory (a Keynesian one centering on aggregate demand and aggregate supply).

[2] The various layers of financial intermediation hide this underlying relationship as if it were behind a veil.

[3] The BIS definition of a zombie company is even more restrictive than ours. It requires, in addition to having an interest coverage ratio lower than 1, a Tobin’s Q lower than the average for two consecutive years (meaning the market values these companies lower than their competition).

[4] Part of the increase can be explained by a greater number of zombie companies and another part by an increase in each company’s valuation.