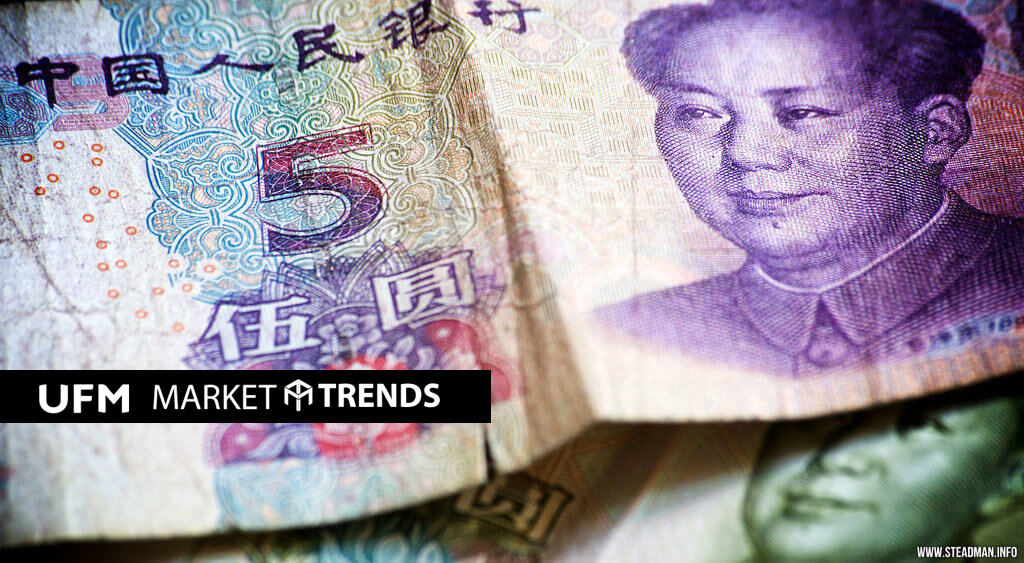 The growth of corporate credit in China has been excessive in the last five years. This credit boom is related to a substantial increase in investment after the Great Recession.

In the United States, the “debt crisis,” as Nassim Taleb called it, has not been corrected by corporations pursuing an intelligent strategy to reduce their debt. Chinese companies, however, have been following suit. Their profitability is deteriorating more and more. Some believe that the Chinese corporate debt is akin to a mountain; others, to a time bomb.

Those who suggest that the growth of local debt is stable and follows China’s development phase seem to forget that business efficiency and responsible decentralization are the keys to sustaining a credit expansion. Let’s examine each part of this argument.

Why Should We Be Paying Attention to China?

The size of the debt itself is unimportant (or at least it does not deserve excessive attention) if the financial sector faces its losses despite a promise by monetary authorities to bail it out. If productivity increases are to be pursued via capital formation, corporate debt in China should be restructured based on guarantees of financial stability to avoid moral hazard.

This kind of guarantee, which only flourishes in a market economy, is the way to restructure the large number of state-owned enterprises in China that operate in sectors with evident overcapacity.

The Chinese debt is overwhelming not because of the volume—more than $34 billion—but because the figure has quadrupled in seven years (2007–14) according to estimates from the central bank, although, to be sure, Chinese authorities supplying such public information do not have an exemplary reputation (China is not Switzerland or Japan).

Debt is not a trivial problem. However, President Xi Jinping’s methods are those of a political leader who tries to inhibit the fluctuations of an economy with a plan. In the twelfth five-year stimulus plan (2011–15), Xi noted the need for “an economic and social balance” to guarantee long-term development goals, which include encouraging consumption, liberalizing interest rates, removing capital controls, and, crucial for Chinese propaganda, increasing the supply of services for citizens. 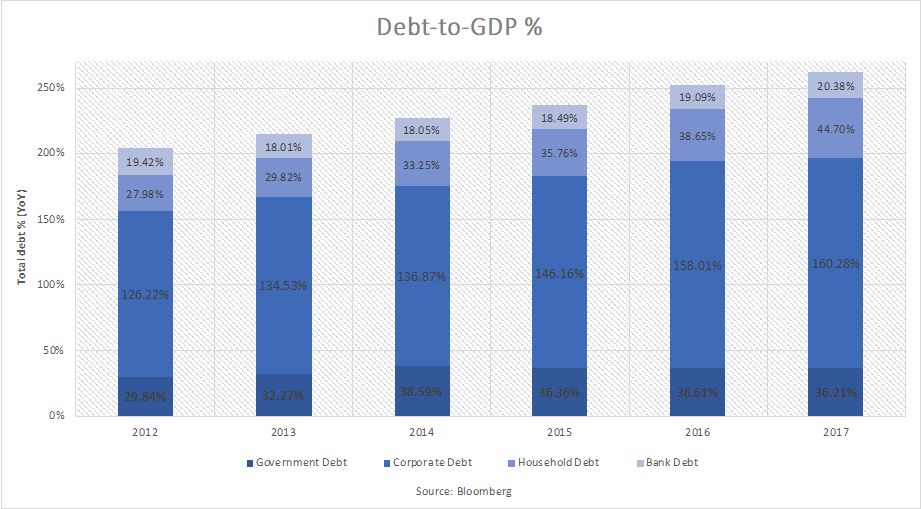 Xi’s plan seems great until we see that the data, as usual, fail to support it. Deleveraging an economy of incredible size without creating a slowdown in the short term is doomed to fail. This kind of idea only inhabits the minds of social engineers or “risk experts.” Figure 1 shows how the current growth model is not sustainable and, in the context of overcapacity in various sectors, implies that there has been a misallocation of resources.

The general level of debt as a percentage of GDP has grown almost 30 percent in only the last five years.

The Problem of China as the Axis of the World Economy

In general terms, global debt has exceeded $60 billion and no developed country has managed to reduce its debt-to-GDP ratio since the financial crisis of 2008. Even though it has been established that the main problem has been public debt in China (a growth of 17 percent that has surpassed even the pace of real global GDP growth: 3.7 percent according to IMF data), real estate debt and China’s growth are two matters that should not be overlooked.

China has moved from being a developing economy before the Great Recession to a developed economy a decade later.

Not only the speed of the growth of debt, but also the debt’s composition is a concerning issue. Almost half of it comes from the real estate sector and related industries, and at least another 30 percent is the product of shadow-banking intermediaries, whose financial discretion is highly doubtful.

Consumption Is Slowing, and Other Mitigating Factors

The trade war between China and the United States, whose aggressive rhetoric seems to have relaxed in the last month of 2018, has caused consumers to restrict their consumption. The main effect has been the economic slowdown in the industrial sector, which has favored the growth of China’s services sector. 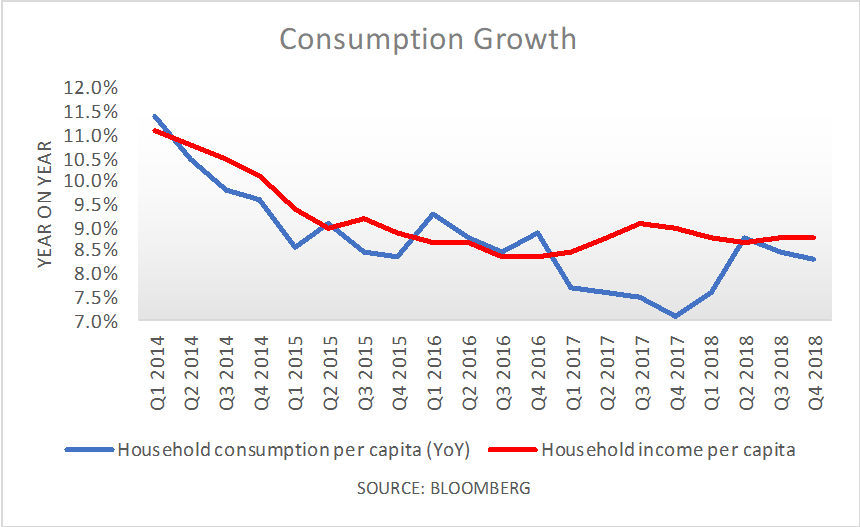 It is the seventh month in which the growth of per capita consumption is below the growth of income. This trend has caused the continued growth of the savings rate, which closed 2018 with an average of 31.8 percent (last four quarters).

Since the Great Recession and the collapse of foreign trade a decade ago, China has not had seven quarters in line with this trend, which is striking for a country that has promoted policies to stimulate domestic demand on the unsafe basis of high credit growth. This growth has been close to 20 percent, well above real GDP growth (3.7 percent in 2018, according to IMF data). 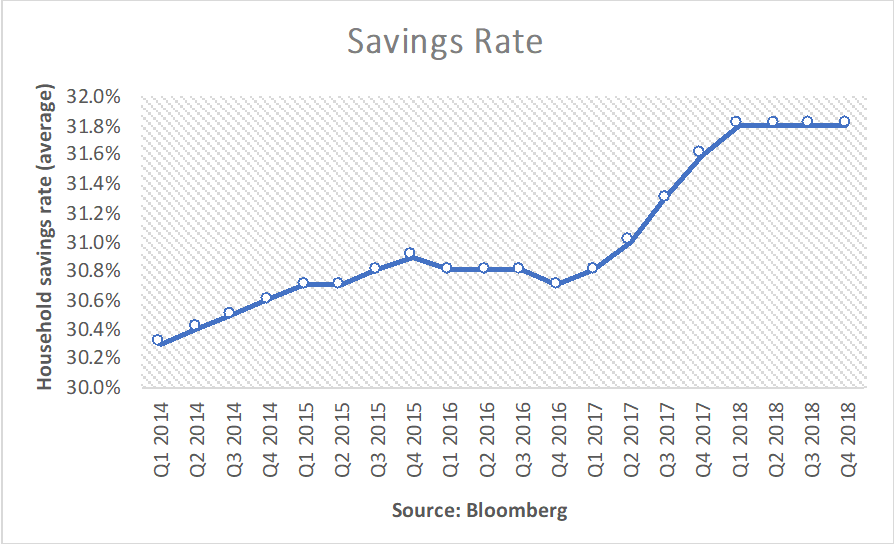 What Is the Problem with the Rapid Growth of Credit in China?

There is a less obvious relation between the accumulation of credit and the increase in the volume of savings of Chinese households. As we stated in our latest report on the Chinese economy, corporate profits have not stopped falling. However, the intertemporal preference of Chinese households—to hold a large amount of savings—has allowed citizens to finance corporations. This flow of capital requires the intermediation of the financial system. This could explain the rapid growth of credit.

There is evidence that booms in credit growth of that size are always dangerous. The expectations of Chinese economic agents are not corrected, and the slowdown in consumption, together with the increase in saving quotas, also appears to be the product of the concentric waves caused by the dangerous rhetoric from the Trump and Xi administrations.

A productive strategy that identifies companies that are in financial problems and a restructuring of state companies are mere theoretical recommendations, almost typical of economists. Yet the basic premise is to recognize that planning a supposedly robust economy with multiple stimulus packages to double spending does not have long-term benefits, but, instead, quite the opposite.

China can prepare an antifragile strategy (to use Taleb’s term) that consists in learning from the mistakes of others—especially those of the United States. The premise is to accept short-term economic pain to earn a long-term bonanza. This reduction in growth in the short term means unemployment and less output, two of the quasi-irrational fears that seem to come from Trump’s Twitter account. The harsh economic reality is that this feared volatility is nothing but trial and error: pure entrepreneurship. Production and employment increase while work is reassigned to more productive sectors such as services.

We must not stop observing China, which will have to fight against the temptation to stimulate an increasingly slow GDP growth through fiscal policy. It faces a constant struggle against economic irrationality on the threshold of a new global financial crisis.

Diego Santizo is an analyst at UFM Market Trends. He has a master’s degree in Economics and a Minor in Finance from Francisco Marroquín University. He is an assistant professor of Economics and related courses at UFM. He is deeply committed with learning, teaching and researching. He is also a multilingual translator.