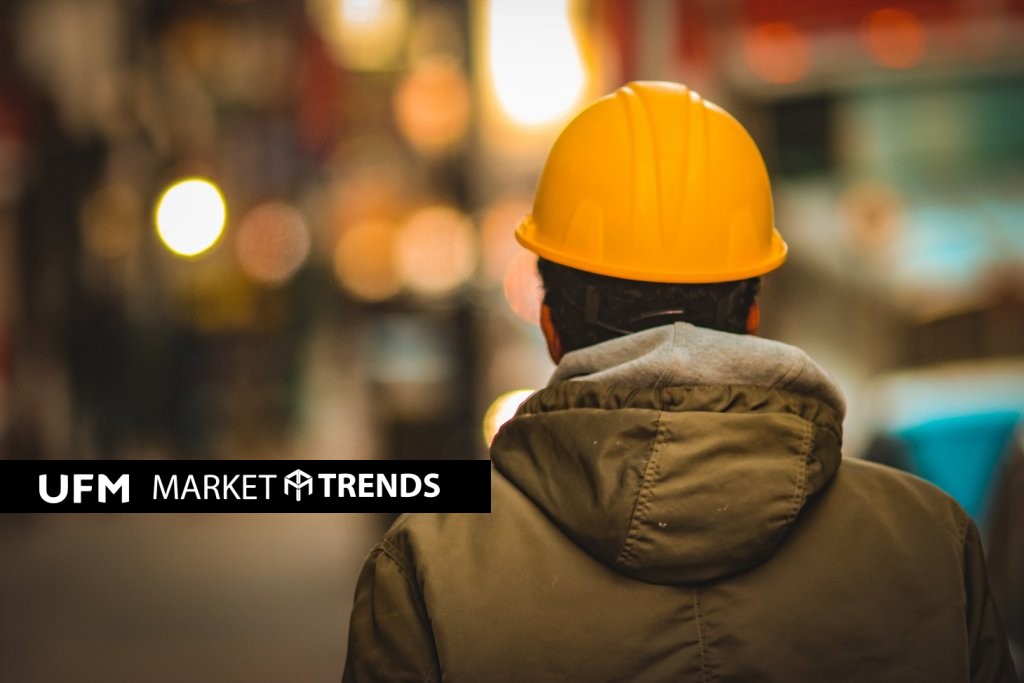 This article explores the concept of the Great Decoupling, or the supposed discrepancy between increased labor productivity and higher worker wages. Prior to 1970, increases in labor productivity translated into wage increases, just as economic theory dictates. However, it appears that since the 1970s, wages have barely increased or have increased much slower than productivity. What is the reason for this?

The Great Decoupling: Wages Are Not Growing as They Should

Let us first provide a visual snapshot of the Great Decoupling. In this graph, prepared by the Economic Policy Institute and published by the World Economic Forum, we can see that wage increases went hand in hand with increases in labor productivity up until 1970. Since then, wages have practically stagnated while productivity has continued to increase. Graphs similar to this one can be found in many articles. 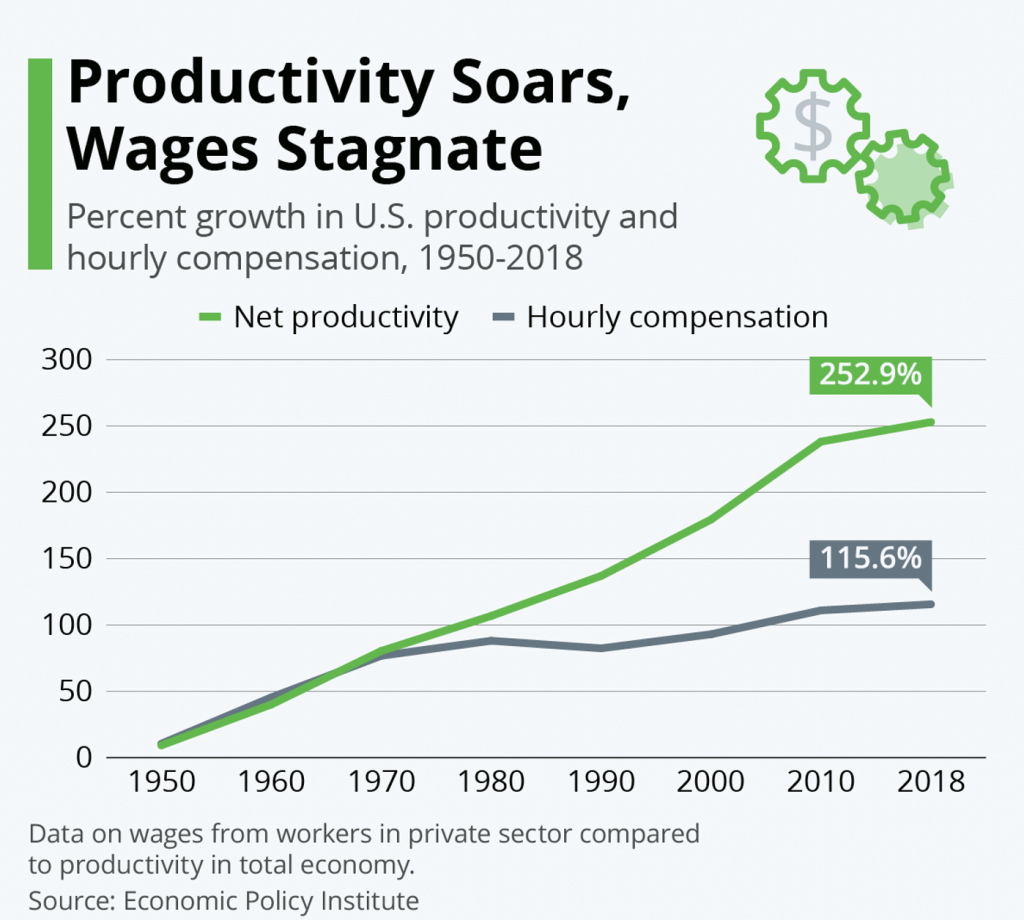 Traditional economic theory tells us that a worker’s wage is determined by their marginal productivity. Productivity increases should translate into wage growth. Other issues must be taken into account; however, the basic principle holds true.

Explanations for the Great Decoupling

What explains the Great Decoupling? There have been several flawed attempts to explain this problem. Those most critical of the market system have suggested that the decline of unions is responsible. The assumption is that workers have lost the ability to negotiate so that productivity increases have been appropriated almost entirely by employers and barely by workers.

Another explanation put forth by the enemies of capitalism is that the 1980s were a time of triumph for supply-side economics, liberalization, and deregulation, and large businesses were the main beneficiaries of these triumphs.

Those in favor of the free market have argued that the decoupling was caused by the end of the gold standard in 1971. The removal of a monetary asset external to the financial system led to constant monetary interventions to save companies, creating a market focused more on courting political favor than the favor of consumers.

What Is Causing the Great Decoupling?

In 2007, the economist Martin Feldstein published a paper in which he masterfully explained that the Great Decoupling is an illusion based on two mistakes.

The first mistake is to focus on wages and not on workers’ total compensation. It is true that wages are almost stagnant in real terms (that is, after accounting for inflation); however, in recent decades, nonwage forms of compensation such as contributions to pension funds, private medical insurance, and Social Security have increased significantly.

In the graph below, we can see that wages almost completely uncoupled from worker compensation in the early 1970s, just when the Great Decoupling is supposed to have begun. Between 1964 and 2021, wages grew 17 percent in real terms, while worker compensation more than doubled. In other words, US workers are earning more in compensation although their wages have stagnated.

The other mistake described by Feldstein is more technical.[1] Using the Consumer Price Index to deflate wages (that is, to account for inflation) is useful in some situations, such as when we want to know how workers’ standard of living is evolving. However, it is a grave mistake when analyzing the evolution of productivity and wages.

Companies are paid for what they produce, and workers are paid to produce, not to consume. Therefore, the GDP deflator, which includes all goods produced in an economy, is used to analyze changes in real production and productivity. But nominal wages are converted to real values with the Consumer Price Index, a much narrower index that includes only consumer goods. For the comparison between productivity and worker wages to be accurate, we would need to convert both measures to their real values using the same price index. Since we are not currently doing so, we are comparing apples and oranges.

The difference between the CPI and GDP deflator is enormous in the long term as can be seen in the graph below. The gap began to widen in the 1970s, which, again, is when the Great Decoupling is supposed to have begun. Consumer prices, measured by the CPI, have multiplied by more than 10 from 1947 to 2021. For their part, general prices in the North American economy, measured by the GDP deflator, have multiplied by 6.4 between 1947 and 2020. The difference is huge.

If we use the GDP deflator to calculate both real worker compensation and real productivity, the picture changes drastically.

Now we can see that real productivity has grown at almost the same rate as real compensation. From 1947 to 2020, productivity multiplied by 4.7 while worker compensation multiplied by 4.6. Therefore, neither the demonetization of gold, nor the fall of unionism, nor the deregulation and liberalization caused the Great Decoupling. In fact, nothing has caused it: it simply does not exist.

What If We Use Nominal Variables?

Now worker compensation and increased productivity go nearly hand in hand. We have to use dotted lines in the graph to make the difference visible. At the beginning of the 2000s, a slight gap did open, but it has now almost closed. However, nothing has taken place that is even close to deserving the bombastic name “the Great Decoupling.”

Conclusion: The Great Decoupling Is a Tall Tale

Economists have been quick to jump to conclusions about data that are clearly incorrect. Worker compensation has barely diverged from productivity increases since 1947.

The most seasoned enemies of capitalism are going to have to search for another narrative since the narrative of the Great Decoupling and the growing power of capital over labor lacks empirical and theoretical support. The promarket narrative in which the decoupling is linked to the abandonment of the gold standard has a better theoretical basis. But while the abandonment perhaps caused distortions in capital markets, it does not appear to have affected the labor market.

[1] Economists talk about variables in nominal terms and in real terms. Any monetary variable faces the problem that prices are constantly changing, and unfortunately almost always increasing. If you were earning $10 an hour last year and are earning $11 an hour this year, your wage has increased by 10 percent in nominal terms. However, if prices have risen by 10 percent, your purchasing power has not increased at all. Therefore, your real wage has remained constant. Speaking in real terms simply means accounting for the effect of inflation on economic variables.