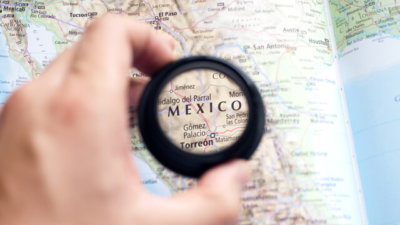 Mexico is going through a complex scenario, both in its internal and external environment. Last year was one of the most complicated ones for the Mexican peso. And things remain unclear for 2017: external factors influenced mainly by the US electoral process and its outcome have compromised Mexico’s economic performance. In this panorama, investment is one of the most important and decisive issues. Last year ended with Donald Trump winning the US presidency and going after companies with plans to invest in Mexico, starting with the automotive industry. The Republican leader’s economic plan mainly includes a repatriation of manufacturing that has left the United Stated for more economic places, as well as the renegotiation of the main economic international treaties—clearly with protectionist hints. In these two aspects, Mexico is seriously compromised: the country’s main commercial partner is none other than the United States.

Donald Trump has already managed to get big investment projects destined for Mexico to return to the United States, most notably Ford and General Motors. Trump was able to convince these great automotive companies to return by threatening to implement a “border tax” on all imports from Mexico, causing a wave of fear among companies whose main market is the US. Yet in 2017, the situation seems to be returning to normal. In 2017, however, the situation seems to return to normal. Most at the San Luis Potosí automotive cluster, where Ford’s plant was to be located, believe that the worst has passed. The cluster of 240 automotive companies claims to have new investment projects in mind. This is a small example shows how complex Mexico’s investment situation is.

The financial account is a section of the balance of payments that is highly exposed to volatility because of the political and economic relationship between Mexico and the United States. Last year, it brought in $35,873 million, as seen in graph 1. The figure slightly recovered compared to the fall in 2015, yet the downward trend remains. 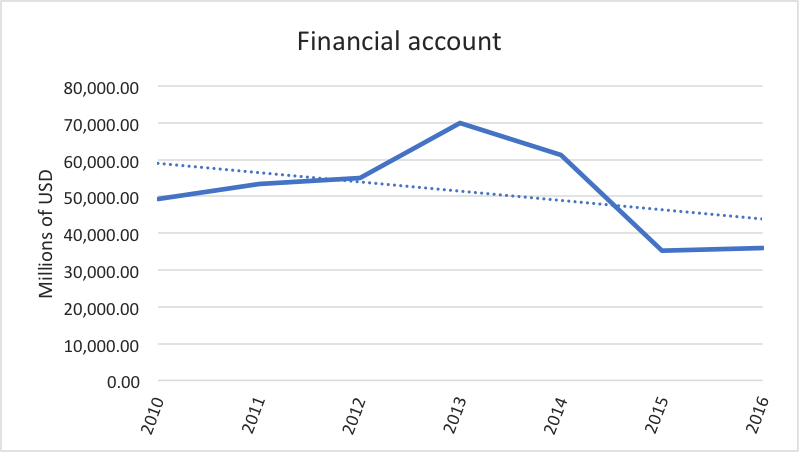 76.6% of the financial account balance was covered by direct foreign investment. In other words, $27,526 million entered Mexico in the form productive investments, as shown in graph 2. The figure for 2016 has been the highest of the past three years.

In 2016, for every foreign investment dollar that entered the Mexican market, there were 2.78 mexican dollars deposited in foreign banks or used to purchase securities abroad. In 2016, the net capital outflow abroad by Mexicans was $22,376 million. Meanwhile, capital inflows of foreign investors that entered Mexico were $8.41 billion for the same year. This is the largest capital outflow in Mexico since 2013. Investors residing in Mexico have increased their overseas deposits fearing the volatility of the Mexican peso; this increase in 2016 doubled that of 2015 as shown in graph 3. 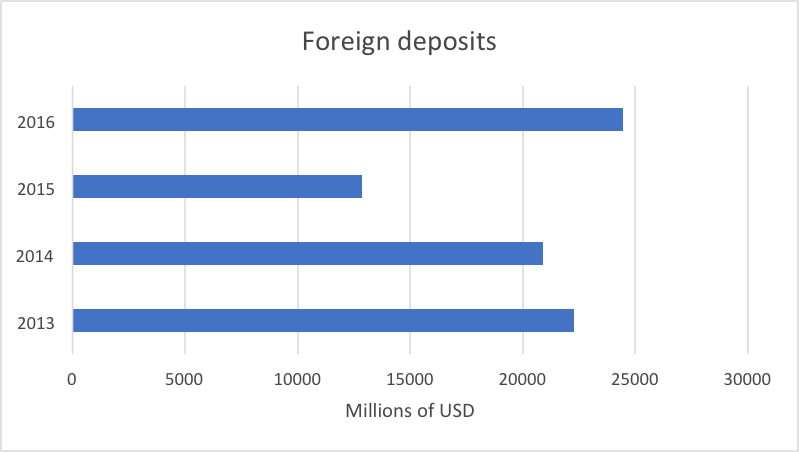 On the other hand, securities issued have had an interesting behavior, as shown in graph 4. Those emitted by the private sector have a clear downward trend. The opposite happens with securities emitted by the public sector; their trend is upward and their growth slope increased in 2016. 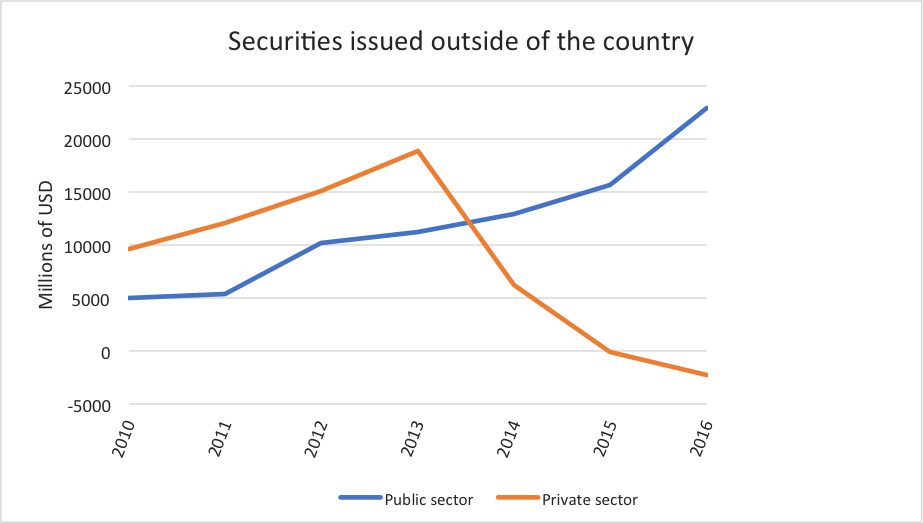 The rise in securities issued outside the public sector can be explained by the high yield differential of Mexican bonds. This is a strong incentive for investors because in 2016 the annual rise of Banxico’s interbank rate was 3.25%—a figure higher then the growth of US government bond yields. Foreign flows have preferred long-term instruments, but have fallen short on short-term ones.

In 2016, new investments by foreign invested companies declined. Yet since 2010 the trend has been rising, as shown in graph 5. In 2015, this figure had a significant growth of more than 53% compared to 2014. 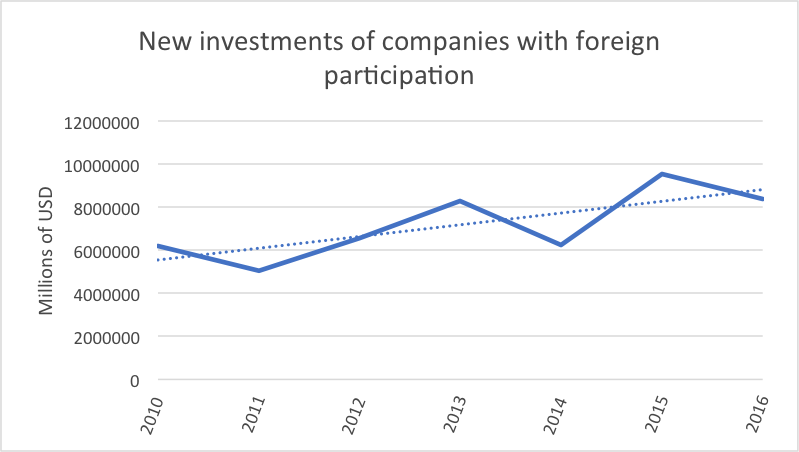 One of the sectors that is attracting more investment is hydrocarbons. The energy reform pushed by the PRI government promoted alliances between PEMEX and international companies specialized in deep-sea oil extraction. Furthermore, the liberalization of the gas industry in 2017 appealed to gas companies: until 2016 PEMEX had a monopoly over oil extraction and gas distribution in Mexico. This reform was important because the Mexican government recognized its inability to continue subsidizing gas prices in the market, mostly because of to the country’s public finance problem and a possible credit rating reduction by the three major rating agencies.

Problems in the confidence of Entrepreneurs

The surveys carried bout by Mexico’s National Institute of Statistics and Geography (INEGI) on business confidence shows a pessimistic panorama. INEGI conducts the monthly survey of business opinion (EMOE), allowing for broad and timely knowledge of Mexico’s business sector. The survey represents the opinion of business leaders on Mexico’s economic situation in the commercial, construction, and manufacturing sectors. As shown in graph 6, confidence in these three sectors has been falling since the first quarter of 2016, and plummeted in 2017. The volatility of the Mexican peso, the uncertainty about NAFTA, and the inflationary pressures of 2017 are the main concerns of entrepreneurs; consumer confidence has equally fallen. 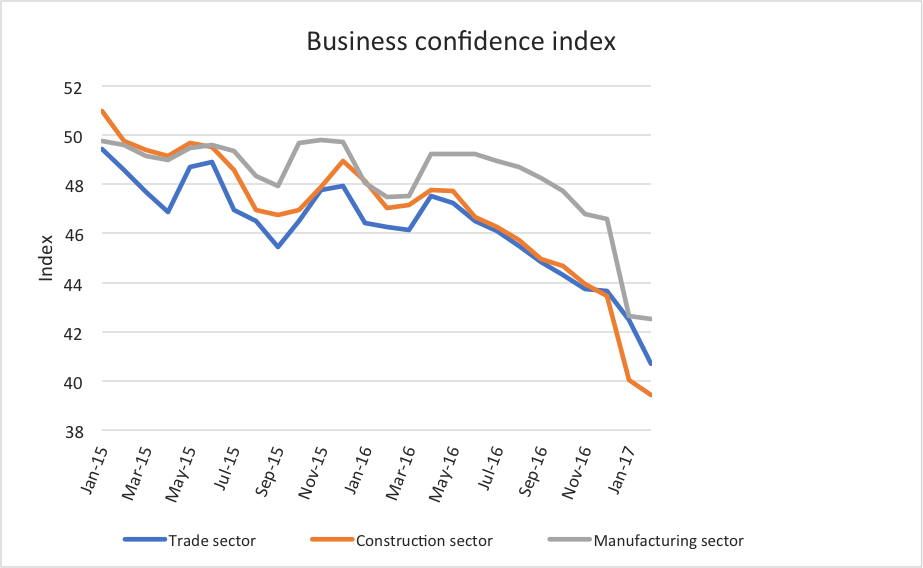 Mexico’s presidential elections will be in June 2018, and the candidate’s performance will be an important factor to take into account for the investment panorama. Some polls place Andrés Manuel Lopez Obrador, better known as AMLO, from the National Regeneration Movement party (MORENA) as the leader of the electoral contest. Andrés Manuel represents a threat to the Mexico’s economic performance of 2017 and 2018 because his party is completely against the energy reform and the entry of private investment in traditional governmental activities such as oil extraction. Furthermore, the party’s proposed public spending policies can put Mexico’s credit rating at risk. When he was close to wining the presidency in 2006 and 2012, the peso depreciated. A candidate that publicly states that he seeks to legally reverse the energy reform poses a threat to foreign productive investments in Mexico’s already complicated environment.

Mexico’s investment panorama is complex. The growing outflow overseas reflects the concern of Mexican investors, and the fact that the main attraction are government issued securities—even if it attracts monetary flows—is not very encouraging. Furthermore, the confidence of the businessmen and consumers is very low. For now, the only thing left to do is wait for to see how Mexico’s relationship with the United States changes. White House officials have stated that a trade agreement benefiting both the United States and Mexico can be reached, but no serious talks are expected until the end of 2017. Besides, the Mexican peso has recovered more than half of the losses it suffered after Donald Trump was elected president, although it has yet to recuperate to its 2015 levels. The electoral period will be another decisive factor for investment in Mexico. If ALMO were to win, many investors would withdraw from Mexico without waiting for NAFTA’s renegotiation.